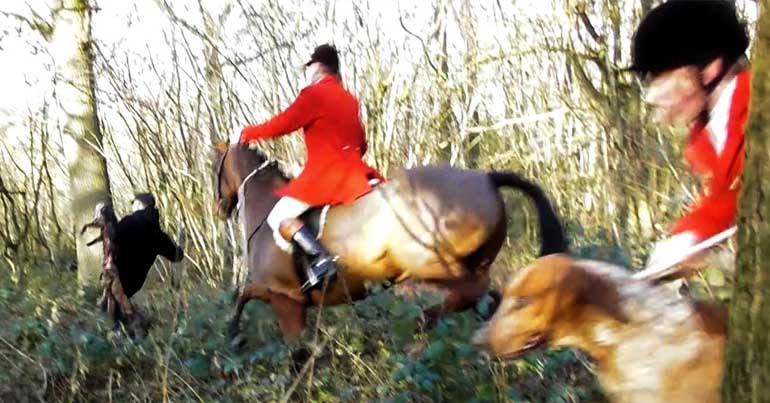 During a three day trial, a judge heard how members of the Thurlow Hunt not only illegally hunted a fox but assaulted a hunt saboteur who was retrieving the body. And the verdict exposes a common claim by the hunting community as a lie.

On 13 March, district judge Nick Watson found huntsman Christopher Amatt guilty of illegally hunting a fox on 26 December 2017 as well as common assault on hunt saboteur Steve Milton. Watson also found Archibald Clifton-Brown guilty of assault by beating Milton but not guilty of illegal hunting. The judgement came after a three-day trial at Ipswich Crown Court. The Canary was present on the first and third days.

Beds & Bucks Hunt Sabs described hearing hounds “in cry”, or on the scent of a fox, as soon as they entered Trundley Wood near the village of Great Thurlow, Suffolk. Video evidence showed a pack of hounds in close pursuit of a fox inside the wood. Soon after, sabs retrieved the body of the killed fox amid physical confrontation from members of the Thurlow Hunt. One sab described Clifton-Brown as “wrestling” Milton for the body. Meanwhile, Amatt was accused of riding his horse at Milton and striking him with a whip.

The defence against charges of illegal hunting claimed sabs had turned the fox back towards the hounds. Amatt told the court that noise made by sabs scared the fox back into the pursuing pack. He also initially told police there was a “horseshoe” of 21 sabs blocking the fox’s path, although this wasn’t raised during his testimony. Meanwhile, Clifton-Brown said his assault on Milton stemmed from worry over the “propaganda” value of the fox’s body as well as concern that the sab would ‘steal’ the fox’s body.

In his summary, Watson said Amatt and Clifton-Brown’s evidence was “fanciful”. Video evidence showed no more than eight sabs present in the wood. It didn’t show sabs blocking the path of the fox.

On the other hand, sabs claimed they heard Amatt encouraging the hounds to continue pursuing the fox. Although Amatt claimed he was trying to call the hounds off the fox, Watson disagreed. In his summary, the judge said he “[believed] the witnesses who said Mr Amatt was encouraging the hounds”. Watson also said that on a genuine trail hunt, Amatt and Clifton-Brown would have made attempts to call the hounds off “on realising the fox had been followed”. They “made no attempts to do so” and appeared concerned primarily with sabs trespassing.

Amatt and Clifton-Brown gave testimony that was “inconsistent” with earlier statements to the police, the judge said. However, Watson wasn’t certain that Clifton-Brown actively encouraged the hounds. Because “recklessness” isn’t illegal under the Hunting Act, he didn’t find Clifton-Brown guilty of illegal hunting.

Hunting’s time is up

sends a clear message to those breaking the law and abusing our wildlife. We will not only sab you, but we will also bring you before the courts.

Charities such as the League Against Cruel Sports and RSPCA have been responsible for the bulk of convictions.

Hunt supporters often accuse sabs of turning a fox back towards the hounds. The resulting implication is that sabs are responsible for the animal’s death. The Thurlow Hunt’s defence rested on this accusation but testimony and video evidence exposed it as a lie. Judge Watson also saw through the facade of trail hunting.

This shows the hunting community’s lies and cover stories are being picked apart, one by one. Not just in the public eye but now in the courts as well. However, the Hunting Act must have all of its loopholes removed if it’s going to be effective against hunts. Ban hunting outright.