To honour the memory of Lyra McKee, we have to move beyond simply feeling disgusted - Canary Workers’ Co-op 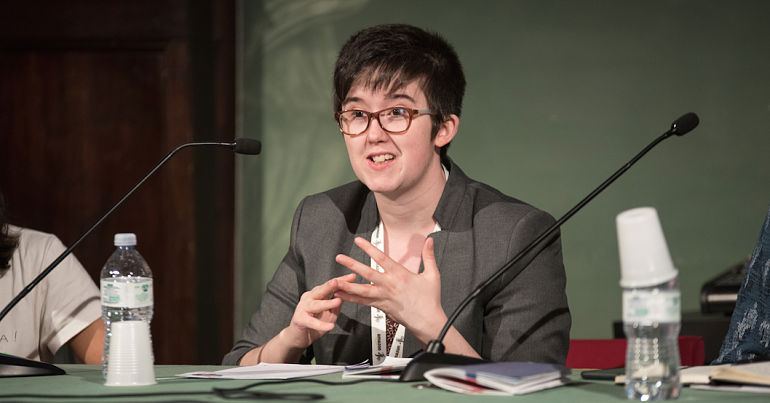 Journalist Lyra McKee was eight when the Good Friday Agreement (GFA) was signed on 10 April 1998. She lived most of her life in an Ireland of relative peace. And until the New IRA took her from us on 18 April in Derry, she spoke up for marginalised people.

So it’s a painful irony that her life was ended by violence, and in a marginalised community. We must honour her memory by speaking up for the marginalised, as condemnation alone masks the real problem.

Lyra died while covering disturbances between police and republicans in Derry’s Creggan estate. It was the Thursday before Easter. The Creggan is a Catholic and republican neighbourhood, so Easter is important. While a religious holiday for Catholics, Easter also marks the anniversary of the 1916 Rising for republicans. The Rising marked the beginning of the struggle for Irish independence from Britain.

While the south of Ireland gained its independence after the Irish and British signed a treaty on 6 December 1921, the north remained under British rule. The New IRA and its alleged political wing Saoradh refuse to accept this.

The Police Service of Northern Ireland (PSNI) claims it was in the Creggan estate that night to disrupt dissident republicans. It believed some republicans were “going to mount murderous attacks on the police”. While raiding houses in the Creggan, the PSNI came under attack from petrol bombs. Saoradh claims Lyra McKee “was killed accidentally” after a “Republican Volunteer attempted to defend people”. Lyra died later in hospital.

The PSNI has raided houses in the Creggan on numerous occasions. Additionally, the wider region of Derry and Strabane has been subjected to a high number of stop-and-search operations. And the PSNI had to pay £55,000 in compensation related to its use of stop-and-search in this region. It carried out 14,393 such operations between January 2015 and December 2018.

frustrated with the lack of provisions and investment coupled with witnessing overtly sectarian and political policing of our communities.

And despite a 21-year-old peace agreement, social deprivation is a major problem. As The Canary previously reported, some experts believe it’s primarily the middle class who benefited from the GFA. In 2014, a University of Ulster survey revealed republican and loyalist areas most affected by the conflict saw their life prospects worsen as a result of the GFA.

The Creggan is also part of the wider Foyle region. This region has among the highest unemployment rates in the UK. It was one of five socially deprived areas in the north selected for a £45m investment project in 2016 due to its high unemployment level. And as also highlighted through Lyra McKee’s work, the north is suffering a suicide epidemic with rates rising fast.

The police raid, the riot, and the loss of life took place in a marginalised community; a community ignored by the GFA. And while public figures spend time expressing their understandable disgust at Lyra McKee’s killing, they’re ignoring the real problem. Let’s hope we start listening before we lose anybody else.