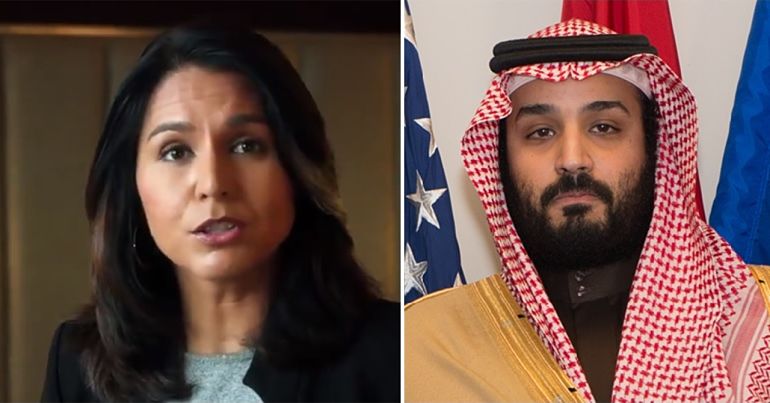 Iraq veteran Tulsi Gabbard is fast becoming a leading voice against disastrous US foreign policies. And after Saudi Arabia’s latest mass execution, the 2020 Democratic presidential hopeful made a vital point about why ongoing Western support for the oil-rich nation is so dangerous.

A beheading bloodbath Daesh would be proud of

On 23 April, the Saudi dictatorship beheaded 37 citizens. As Amnesty International pointed out:

The majority of those executed were Shi’a men who were convicted after sham trials that violated international fair trial standards which relied on confessions extracted through torture.

Saudi Arabia is using the death penalty as “a political tool to crush dissent”, according to Amnesty’s Lynn Maalouf. And such executions have increased significantly under ‘Crown Prince‘ Mohammed bin Salman.

Commenting on the mass executions, Gabbard made a link with the horrific recent massacre of over 350 people in Sri Lanka, which Daesh (Isis/Isil) has claimed responsibility for:

Trump/Pence continue to try to hide the truth from their Christian supporters–the terrorist attacks on Christians/Christian churches in Sri Lanka and elsewhere are inspired by the extremist Saudi ideology that Saudi Arabia spends billions propagating worldwide. pic.twitter.com/nMJEulHXv2

Indeed, the West – and the UK and US in particular – has an unwavering alliance with the Saudi dictatorship. And this allows the regime to keep using billions of its petrodollars to spread its extreme state ideology of Wahhabism around the world.

Many Muslim leaders and scholars have long stressed that what happens in Saudi Arabia (a country of 29 million people – not all of whom are happy with Wahhabism) is simply not true for the world’s Muslim community as a whole (which has around 1.6 billion adherents).

But as the New Statesman writes, “the narrowness of the Wahhabi vision is a fertile soil in which extremism can flourish”. And it’s no coincidence that both al-Qaeda and Daesh follow this ideology (one senior Qatari official has even claimed the latter began as “a Saudi project“).

Yet the arms sales continue…

But it’s Saudi Arabia’s arch-enemy Iran, not the House of Saud, which is the main target for US regime change efforts in the Middle East today. So you won’t be hearing Donald Trump shouting about the evils of the Saudi regime any time soon. Nor will there be much noise from Theresa May’s government in Britain, as historian Mark Curtis pointed out:

And it won't affect the UK's special relationship. What a world. https://t.co/2oRePzaQnm

For many peace activists, the hypocrisy is palpable:

Brutal Saudi regime beheads 37 people in one day, including 3 arrested when minors. If Iran had done this, there would be a global outcry. Saudis? The world yawns. Shameful! https://t.co/wOV8vrSoQV

Progressive US politicians, meanwhile, continue to call for arms sales to Saudi Arabia to end:

This is appalling. We have to stop selling the Saudis weapons and supporting this brutality. https://t.co/4GIOhFsLdN

As Campaign Against Arms Trade (CAAT) stressed in a press release, however:

Despite its atrocities, the UK Government has continued to arm and support the dictatorship. The UK has licensed £4.7 billion worth of arms to the Saudi regime since the war in Yemen began in 2015…

In the US, meanwhile, Donald Trump recently used his veto powers to oppose a resolution that sought to end US military support for Saudi Arabia’s brutal war on Yemen – which has created the world’s worst humanitarian crisis.

Western support for the Saudi dictatorship must stop. And until it does, we must all keep sharing the truth about the brutal regime and calling on our governments to stop propping it up.