Thanks to people like this, Britain now has a top position on the 'league table' of shame - Canary 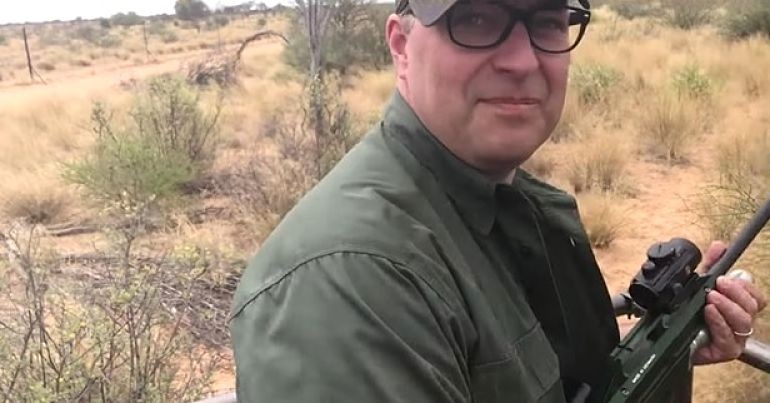 The Campaign to Ban Trophy Hunting (CBTH) revealed that Britain is 12th equal on a hunting league table on 28 April. The country has attained the dubious position for the amount of ‘factory-farmed’ lions its trophy hunters have killed in ‘canned’ hunts in South Africa.

CBTH revealed Britain’s league table place on the same day ex-Conservative Party deputy chair Michael Ashcroft had a harrowing investigation into the ‘farmed’ lions industry published in the Mail on Sunday. It included the story of an Essex-based city worker who paid £3,000 to shoot a lion illegally with tranquiliser darts.

Both CBTH and Ashcroft are calling on the government to take action over Britain’s role in the travesty. The Conservative government has been dragging its heels over a ban on lion trophy imports since 2017.

As CBTH has previously documented, lion populations are in a perilous situation. It’s believed there are now only around 20,000 lions left. They have disappeared from 90% of their original range, and are extinct in 26 countries they used to inhabit. Nonetheless, the hunting industry traded 13,800 lion ‘trophies’ between 2004-2014.

Many of the lions who hunters pay to shoot for ‘fun’ are born in South Africa on ‘factory farms’. It is big business in the country, where those involved bleed money out of every part of the animal’s life. Lionesses have to give birth perpetually, like most farm animals, to new litters of ‘products’. People snatch their cubs away after only a few hours to make money off them in the ‘lion petting’ industry. Once they’re bigger, these lions are fed into ‘walking with lions’ experiences.

Finally, when the lions are adults they’re moved to what CBTH calls ‘prison camps’. Here they await the moment hunters pick out their picture from a line-up (with price tags) to shoot. When that happens people drug them, release them into an enclosure and, from behind the safety of an electric fence, the trophy hunter ends their life with bullets.

That’s not where the buck stops, however. Because farms then sell their corpses – particularly their bones – for use in pseudo-medicinal products in Asian markets. This is also the fate for female ‘breeding’ lions once they’re no longer useful.

Hang your head in shame

This is the industry that British hunters are increasingly bringing home their ‘trophies’ from. Furthermore, CBTH says that their enthusiasm for killing ‘canned’ lions has only grown since the notorious killing of Cecil the lion in 2015. The founder of CBTH, Eduardo Gonçalves, said in a press release:

Britain should hang its head in shame over its role in this disgraceful industry… The lion factory-farming and canned hunting industry is the most despicable aspect of an unconscionable industry.

The government promised to ban lion trophies after the Cecil scandal in 2015 but then reneged on its pledge… It’s time Michael Gove and the government took action to stop trophy imports and help bring an end to this vile industry.

Killing lions for fun isn’t just despicable, it’s disastrous for their survival. A staggering 10,000 lions have been killed by trophy hunters over the past decade – about half today’s total remaining population. Lion poaching is on the up throughout southern Africa thanks to the lion bone trade.

Ashcroft’s exposé provides further, in-depth insight into the industry. It details the ‘horror’ of the farms where lions are slaughtered for parts. And it alleges that some facilities in South Africa are cross-breeding lions and tigers because their offspring grow bigger – and therefore make a lot more money in the bone market.

The investigation also documented a “cut price opportunity” for a “British hunting enthusiast” called Miles Wakefield. The city worker paid Mugaba Safaris just over £3,000 to shoot a lion with a tranquiliser dart while he was in the country hunting impala and other game. The company offered Wakefield the low cost deal after a fake hunter (who was working undercover as part of Ashcroft’s team) stalled a plan to kill the lion.

The company and Wakefield claim that the tracking and darting of the lion wasn’t a hunt. Both claim it was part of a ‘conservation’ effort. However, it’s illegal in South Africa to dart a lion without a vet present – there was none. Plus, as Ashcroft pointed out:

After posing for pictures, the men helped load Simba [the lion] into the back of a trailer… This was not, however, the kind of relocation operation that conservationists undertake across Africa. Simba was simply being moved to a holding area where he would await the American hunter who had claimed the right to kill him.

Luckily for Simba, on this occasion that “American hunter” was an undercover investigator who ultimately saved his life.

In every regard, trophy hunting is an unconscionable industry. It’s doing nothing to help with conservation, as declining populations of hunted animals attest. Its only purpose appears to be making big money for an industry that enables fundamentally sick and inadequate people to get satisfaction out of ‘triumphing’ over the magnificent, and defenceless, creatures we share this world with.

As CBTH says, it’s time for this practice to end. With pressure mounting, including from high profile Conservative figures like Ashcroft, the time is ripe for the UK government to do something about it. There’s really no reason not to. Unless the government is in hock to those making money out of this grotesque industry or sympathetic to the monsters who make up its clientele.