'We have chronic elitism and gross snobbery in our social movements. It has to stop'. - Canary Workers’ Co-op 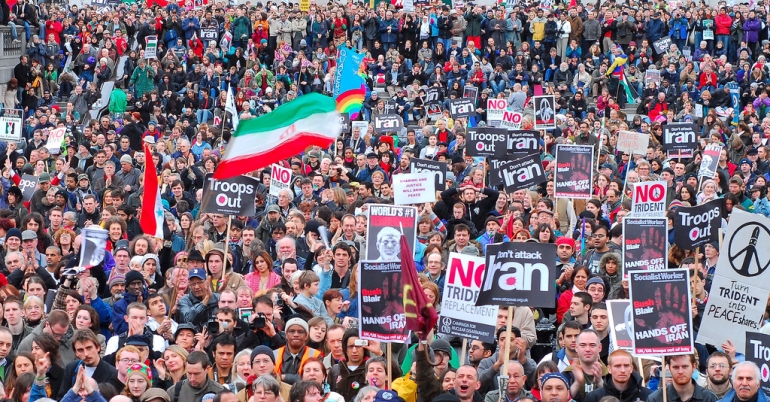 The Canary is pleased to host this guest from D Hunter, author of Chav Solidarity.

In May, I wrote an article in the Independent, expressing frustration veering on disgust at the language Extinction Rebellion (XR) had used around arrest and imprisonment. I got some pats on the back and some grumpy emails about it. One of the points I was trying to get across was that there are some aspects of the XR strategy and rhetoric which show a complete disregard for the lived experience of the people most economically marginalised and that this is a fucking problem for many reasons. Not least because it’s the most economically marginalised, particularly people of colour who are going to be, and in many cases already are, the first to suffer directly from the environmental destruction that is already on its way.

This article isn’t a rehash of that, it’s a continuation of one of the arguments I put forward in my book Chav Solidarity, and one that is present in the Indy article. That social movements in the UK repeatedly ignore the lived experiences and more importantly wisdom, knowledge and wishes of those most directly affected by the movement’s focus.  Despite using words like horizontal, grassroots, anti-oppression and diversity, many of these movements are led, and dominated by, specific segments of the population. This, I want to argue here, isn’t just disingenuous, it’s a reason they’re all so fucking ineffective as well.

The capitalist class and the rest of us

The argument I’m gonna present here has a couple of premises. One is, that I’m working with a classical Marxist definition of class. Not because I think it’s always the most useful or the most accurate reflection on how the capitalist class system works, but because it holds some truth and enables me to construct the argument I want to make. Plus I’m trying to not to use the phrase middle-class today, ’cause everyone gets in a tizzy about defining what the middle class is, who is in it, and that is fairly boring to me.

So, today we’re saying there is the owning class, the capitalist class, and there is the rest of us: the workers, those who sell their labour because that’s what we have to sell. Some of us are excluded from doing this, and the difference between those wages for our labour is vast.

The second premise is that in order to stop the destruction of the planet, in order to end the exploitation and oppression for the majority of the world’s population we need to replace capitalism. We need to remove the wealth and resources from the capitalist class and place them into the hands of the rest of us, the workers.

If you fundamentally disagree with all of that, then this article isn’t for you. If it kinda resonates with ya then stick around. And if a more nuanced and historically informed version analysis of capitalism is running around ya head, then that’s great, but I’m trying to be succinct and I ask ya to carry on reading.

So, me and you, we are part of the working class, and we want to end capitalism. Not make it nicer, nor make it more equal, just end it. We see it as the primary cause of the oppression and exploitation spread throughout our lives, our communities, and nearly every part of the world. It works in tandem with other pervasive ideologies, including patriarchy and white supremacy, to kill, maim and imprison, friends, neighbours and everything else on the planet. We want this to stop. Do we know how to make it stop? Do we fuck. We’re not the only ones to feel this way, there have been people on board with this for generations. Did they know how to make it stop? Meh, I don’t know, but they didn’t succeed.

So, me and you, we are part of the working class, and we want to end capitalism. And let’s say we live in the UK. I know I do, and if you’re reading this there’s a good chance you do too. Maybe we live in the same city, and maybe we’ve got some mates who are also part of the working class, who also want to end capitalism. I’m a survivor of the care system, the prison system, homelessness and drug addiction, who works as an agency care worker with his partner and we have no dependents.

You? Let’s say you’re working in social services, mid-level job, you did well at school and uni and your parents are well paid white collar professionals. We’ve both been organising against austerity for the past decade. You’ve got a mate who works in renewable technologies, he went to private school and he’s already inherited some money from his grandparents, and he knows more is coming.

And then let’s say…

I’ve got a mate, who’s going in and out of prison for most of her life, was raised in care, and has developed physical and mental health problems due to periods of incarceration and homelessness. She was released from nick a few months ago and is trying to get visitation rights with her youngest kid reinstated. We’re all part of the working class, and we all want capitalism to end. We decide we want to do something about it: we meet up for a drink.

We chat a little about some of the things we’ve been thinking about when your mate starts explaining the great historical success of civil disobedience to us. Without context or understanding, he talks of the Black Panthers, he talks of Gandhi, he talks of the Zapatistas, he talks and he talks. He tells us that there’s a new movement being formed to bring down capitalism. He reckons it’s taking all the best bits from his favourite social movements in history, and the plan is to blockade every shopping centre in the UK. He picks up his bag and pulls out some pamphlets. He pulls out some t-shirts and tells us to put them on. We’re forming the local chapter of End Capitalism Wow. He tells us about the training dates we’ve got to go to.

You think it sounds great. You’re not working that day anyway. You can’t believe someone is this organised and that we’re really going to take the fight to the rich bastards. Your mate says he has to go, he’s meeting some mates on the other side of town, he knows they’ll be up for it. He asks you if you know Theodore, you say you do, he invites you with him to meet Theodore and Sebastian at the microbrewing exhibition. You both leave.

Me and my mate stay and get pissed. We tell sad traumatic stories as jokes and get a kebab to share on the way home. And yes, we fall asleep in our respective beds, wearing our new End Capitalism Wow t-shirts.

We are the working class, and we want capitalism to end. We are only going to do that if we stand united, working together, acting in solidarity with one another, basing our lives in mutual aid and self-defence. But we live under white-supremacist patriarchal capitalism, and the difference in experiences of this are vast. These experiences have left us with very different resources.

To highlight this isn’t privilege politics; it’s a call to deal with these differences in a real way. Those of you who have benefited the most from living in the UK under capitalism, and sing from the anti-capitalist song sheet need to do two things. You need to act in solidarity with the resources you have access to, and you need to take responsibility for how you do this. Find people in the same boat as you, pool those resources and offer them the fuck up. Find anti-capitalists who do not and have never had those resources, and they don’t need to be Negri reading, Lenin quoting, finger wigglers to be anti-capitalists. They might just be finding ways to defend their community from the violence of capital. Now hand over your resources, and then when you’ve done that, ask what can you do to support their mission. What’s their strategy? What’s their plan? How can you help?

An arrogant refusal to listen to lived experience

I am bored with my so-called social superiors, I am bored with your ways of doing it. Your smugness, your self-righteousness, your utter disregard for the people who I came up with. The anarchists, green and black, red and black, socialists, the communists, the Leninist, the Leninist-Marxists, the trots, the autonomists, the trade unionists, Momentum, the Labour Party, all of them filled with brilliant thoughtful working class people who have struggled against the onslaught of capitalism. All of them filled with a self-aggrandising, arrogant refusal to listen to the lived experiences, wisdom and ideas of those who have been hit hardest by austerity, neo-liberalism, and the logic of capital.

To recap I’m kinda in favour folks from all walks of life, all professions, all cultures, all neighbourhoods, fighting back against capitalism and its myriad of effects. But this ain’t gonna work if the voices always heard loudest are those who are economically secure, rich in social and cultural capital and who have turned social change into a professional position.

We have chronic elitism and gross snobbery in our social movements.

If we’re a working class fighting together then we have to develop equity in our ranks. At the moment, and for as long as I can remember, and for as long as many of those twice my age can remember, this hasn’t been the case. We have chronic elitism and gross snobbery in our social movements. It’s stupefying. It’s made us weak and ineffective, and it has to stop quickly.

Because this is very far from being just an XR problem, although they’re reaching new dizzying new heights. But they’ve come from our movements, and they are a reflection of our shittiest tendencies. And as happy as I am to see critiques of XR being circulated, sharing one of those critiques on social media doesn’t absolve your group and organisation of the same fundamental flaw.

It’s one thing not to care about the lives of the economically marginalised and socially maligned – if that’s the case, go on with ya, fuck off. But if you’re saying that you do, then that means building social movements with those folk from the outset, not asking them to tag along to your big new idea. It means creating contexts where the most marginalised can have their say in the direction, the strategy, and the message. If creating that context seems like too much work, something too time consuming, too much of a distraction from all the radical shit you want to do, then go fuck yourselves.