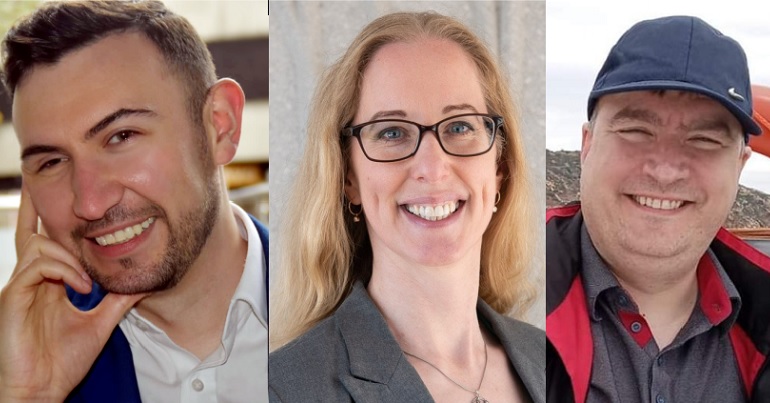 The Tories aren’t the only ones choosing a new leader. The Scottish Green Party is also electing new people to its top jobs. The party is in the process of an election for its two co-leader positions. And three people have already thrown their hat into the ring.

The first person to announce her candidacy was Lorna Slater. She announced her intention to stand on Twitter:

I'm standing to be Co-leader of the Scottish Green Party @scotgp because I believe that we are ready for a fresh new start.

With a new party structure & a new election cycle in Scotland; I hope that you are as excited as I am about the opportunities that the next few years hold. pic.twitter.com/Ou1vsV6hPE

Slater’s background is in renewable energy engineering. And she was second on the Scottish Greens’ list for the 2019 European Parliament elections.

During that election, she built a reputation as a strong performer in public debates and the media.

Speaking to The Canary on her leadership bid, Slater said:

I hope to be a fresh start for the party and lead the Scottish Greens through the uncertainties of Brexit and toward the opportunities that Scottish Independence offers. I will support the Scottish Green volunteers in their work to get more Greens elected in Scotland.

Only the Scottish Greens are taking the climate emergency seriously and have practical policies to tackle it. We will continue to work for social justice, sustainability and grassroots democracy in Scotland. The Scottish Green party are committed to working towards an Independent Scotland inside the EU.

I'm standing to be Co-leader of the Scottish Green Party. I stood for the  Co-convener post a couple of years ago and was encouraged by the responses I got by many party members. pic.twitter.com/Ur3t3xqjd7

This is Kerr’s second run at the party’s top job. He previously stood to be the Scottish Greens’ co-convener in 2017. Speaking to The Canary, Kerr said:

I want to take our party forward gathering support not only from our own current supporters but from people who are disillusioned with the poor offering of the other Scottish parties at a time when austerity is biting hard and there is a climate emergency.

And then on 22 June, a third candidate announced their intention to run. Guy Ingerson, a campaigner from Aberdeen, put himself into the contest. Speaking to The Canary, Ingerson said:

We’ve seen how well Green parties can do across Europe, and it is my ambition to emulate that success here in Scotland. I got into Green politics during the height of the oil price crash in 2015, like many others in the North East I suffered, and as a result I [have] seen the need for us to change our economic future. Fossil fuels are [not] just destroying our planet, they are damaging the lives of ordinary working people too.

We’ve seen Labour collapsing and, this week especially, we’ve seen the SNP block or delay progressive legislation in areas such as the environment, housing, transport, planning and LGBTI+ rights. That means we have to step up to the plate and offer a progressive and pragmatic alternative. That requires new leadership and a renewed sense of purpose.

The Scottish Green Party’s present co-conveners – Maggie Chapman and Patrick Harvie – are yet to say whether they will be seeking election to the new leadership posts. Both have long been associated with the party among the public, with Harvie having been in the role since 2008, and Chapman since 2013. Should either of them stand in the election, they will enter as the favourites.

But Chapman and Harvie aren’t the only prominent Greens staying silent so far. None of the Greens’ five MSPs who sit alongside Harvie in the Scottish parliament have announced their intentions one way or the other. Any of them could be strong competition.

Alison Johnstone was recently appointed as the co-leader of the Scottish Greens’ parliamentary group. This has seen her taking on Nicola Sturgeon at First Minister’s Questions. Standing for the leadership of the party could be a natural next step.

Another MSP with strong name recognition is Ross Greer. Elected to the Scottish Parliament aged 21, he was the youngest ever MSP. This year, he came to national attention through a heated exchange with Piers Morgan about Winston Churchill and racism.

The Greens’ other MSPs are John Finnie who recently pushed to overturn Thatcher’s ban on publicly owned bus companies; Mark Ruskell, who has been fighting to introduce a 20MpH speed limit in Scotland, and the land reform campaigner Andy Wightman.

Nominations close for the leadership election on 28 June, with voting taking place in July. With three contenders already in the race, it looks as if this election will be fiercely fought. And the two people who end up on top will steer the Scottish Greens’ course as it prepares for crucial Scottish Parliamentary elections in 2021.