Jeremy Corbyn is at a crossroads. The decision he makes now will change everything. - Canary 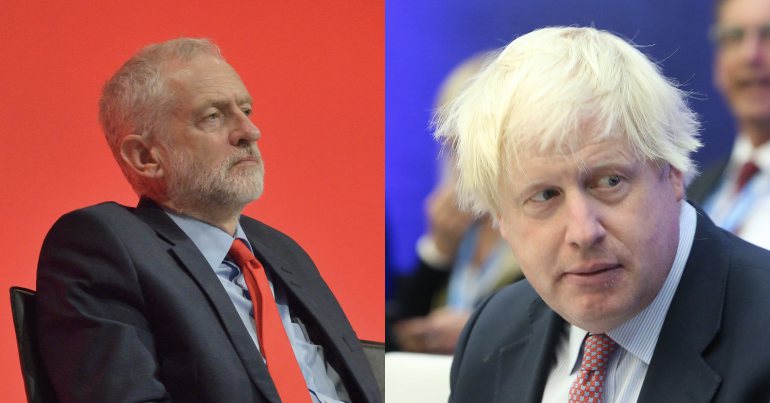 Jeremy Corbyn is at a crossroads. And with scientists warning we have 18 months to begin a green industrial revolution to avoid climate catastrophe, the stakes have never been higher. The decision the Labour leadership makes now will change everything.

Britain may be a small country, but if it elects Corbyn as the prime minister of a genuinely progressive government on the promise to deliver a green new deal, that will have global repercussions. It will be a turning of the tide against far-right victories such as Donald Trump and Brazil’s Jair Bolsonaro.

The UK’s domestic issues are also high stakes. As The Canary reported in 2017, experts predicted 100 excess deaths a day linked to Conservative austerity between then and 2020.

Facing prime minister Boris Johnson, Corbyn has two choices as far as I can see. He can align with the centrists, placating them with power and policy concessions to try and create a top-down ‘popular front’ against a hard-Brexit, as Paul Mason argues. Or Corbyn can energise his base with a manifesto at least as transformative as 2017, continue the process of allowing party members to replace neoliberal-gravy train riders as candidates for parliament, and turn the electoral question to one of austerity and the future of our planet rather than Brexit.

Johnson is desperate for him to do the former. His strategists are lining up to paint Corbyn’s Labour as part of the establishment. Vote Leave director turned Johnson special advisor Dominic Cummings is “already planning the Facebook campaign for a ‘people versus the politicians’ election”. They want to “destroy the Corbyn project and the Labour party” through stealing Corbyn’s anti-establishment credentials.

Right off the bat, shadow Brexit secretary Keir Starmer is walking straight into the trap, generating headlines such as:

Johnson’s strategists could ask for nothing more than Labour teaming up with austerity-delivering technocrats like Hammond. They are desperate for Labour to return to the toxic legacy of Tony Blair’s top down, managerial regime. The logic goes something like: ‘Corbyn may present himself as an anti-establishment force, but really he’s just another cosmopolitan elite closing ranks with other politicians to shut down the popular uprising many consider Brexit to be’. That line of argument is ludicrous to anyone watching closely. Many people are not.

Instead of playing the establishment’s game, the Labour leadership should use the 2017 general election as its main point of reference. This is the only example we have of what happens when a Corbyn-led Labour energises its base with a transformative programme and ignores the centrists even while they are in open revolt.

In 2019, Labour can oppose a hard-Tory Brexit while avoiding making the issue its flagship.

Presently, Mason and co are hard-lining for Remain and playing into Johnson’s strategy of the Remain technocrats V people-powered Brexit. This is a striking lesson in how to lose. Many Labour voters seem to care much less about Brexit than the chattering class will have you believe. By the end of the 2017 general election, only 8% of Labour supporters listed Brexit as their top concern, compared to 48% of Conservative voters. The Labour leadership’s strategy helped bring about this sentiment by avoiding becoming the party of Remain, which sidelined Brexit as an electoral issue.

When the dust cleared, the Conservative Party’s record of austerity, privatisation, and inequality was there for all to see. It stood in stark contrast to the Corbyn-led agenda of social housing, free lifelong education, and ending the wars.

The message of pro-Corbyn activists – “hold on, this guy is actually worth voting for” – rippled throughout the country in an unstoppable force. Labour’s manifesto became the first document of its kind to go viral online. In the space of the six-week campaign, Corbyn’s Labour went from 21 points behind in numerous polls to achieving 40% of the vote share, a whisker off victory. In fact, Survation – the only poll to accurately predict the results – had Labour on 45% and the Conservatives on 39% just a day after the election took place.

Even three shocking terrorist attacks – which traditionally benefit the Conservatives – couldn’t stop the swing to Labour. Rather than treating the public as children, Corbyn ignored the right-wingers in his party and launched an honest critique of UK foreign policy and how it contributes to terrorism. This was a huge victory for the Labour leader.

We should not underestimate the value of an election campaign with a programme people can get behind. This comes into even sharper focus when you consider that 57% of 2017 Labour voters selected the party within a month of election day. In other words, Corbyn’s Labour won almost two-thirds of its vote share in the four weeks before 8 June.

To beat Johnson, Corbyn must play to his strengths – activists, social media, and a membership of over 500,000 people. Any concessions with the centrists and the corporate media will only be used against him. It’s time to marginalise the Labour right and put the transformative programme front and centre as the solution to Britain’s problems.

Being inside the EU did not stop the past eight years of Conservative climate destruction, austerity, or war. And leaving the trading bloc won’t either. Because only Labour’s investment-led programme can end the Conservative misrule, while energising the grassroots sufficiently to beat Johnson.