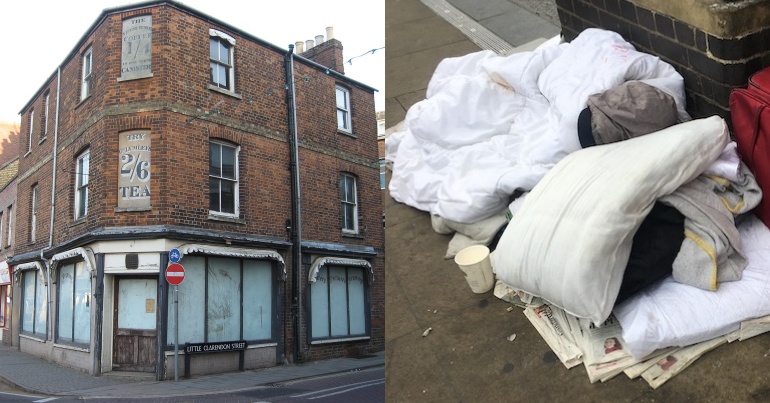 On 30 September, as rainstorms battered the country, around 20 homeless people reportedly squatted an empty building in Chester. The following morning, “heart-breaking” new figures showed that around two homeless people died every day in 2018.

After nine years of Conservative-led austerity, there’s a growing housing and homelessness crisis. Meanwhile, there are thousands of unoccupied, empty buildings in towns and cities everywhere. Yet the richest people make huge profits owning property. So it’s time to rise up, take back the power, and occupy those buildings. Because the more people start squatting, the harder it will be to stop it.

As one of the homeless people currently squatting in Chester said:

I think it’s really, really bad. You’ve got all this empty space – I mean look at this, this building doing nothing, and you’ve got the likes of us.

There should not be homelessness.

Since 2010, the number of people sleeping rough in the UK has risen 165%. According to official government estimates, 4,677 people were rough sleeping in 2018. But this data is collated as a “snapshot figure“, and as Homeless Link noted, it’s actually incredibly difficult:

to work out the number of people sleeping rough for a number of reasons. People bed down at different times, move about, and can be hidden away

It doesn’t take long to do the maths here. And this pattern is reflected all over the UK. Properties lie empty, yet homeless people are dying. Meanwhile, the richest “1% own 29 times what the bottom 20% own”.

The history of squatting is inherently linked to an ongoing attack on civil liberties. But this wasn’t always the case.

After World War 2, even the Daily Mail considered squatting “an act of patriotism”. As Vice reported, huge numbers of “homeless families and veterans” occupied empty properties after the war and:

By 1946 there were almost 40,000 people squatting in England and Wales, in everywhere from luxury flats in Kensington to holiday homes in Brighton. The press looked on sympathetically.

Many people continued to squat, with a ‘boom’ in the 1960s and 70s. In London, for example, “radicals seized empty council properties that the Greater London Council [GLC] had left to rot”. On the whole, the GLC tolerated this.

But everything changed in 1994.

Fight for your right

The 1994 Criminal Justice Act (CJA) gave police a range of new powers. It famously criminalised raves. But the CJA also took aim at travellers, activists, and squatters. As Squall reported in 1993, legislation against travellers and squatters:

is an issue concerned with homelessness, human dignity and cultural identity… The work now is to inform politicians, journalists and Joe Punter of these realities and expose the criminalisation of squatting as draconian and bigoted.

The later 2012 Act was seen by many as a further attempt to “criminalise homelessness and the vulnerably housed”.

But this situation is only getting worse.

Author Alexander Vasudevan has explained the links between squatting and the ongoing “neoliberalisation of capitalism”. As he stressed:

the recent problems of financial capitalism have been displaced onto the poor while the state has withdrawn or privatised services and placed a premium on exclusive property rights.

And here we are in 2019 with more homeless people dying than ever and properties still empty. Years of cuts and neglect have run alongside soaring rents, dwindling social housing, and a boom of fat-cat owners whose profits soar.

Although homeless people should be the priority, there are also millions of people pushed into poverty and paying crippling rents for “unsafe and unaffordable housing”. More young people than ever can’t afford to leave home. Meanwhile, profit-hungry landlords and universities take around 85% of students’ loan and grant income for housing.

Mass occupations of empty non-residential properties offer people a route out of this. Because despite draconian legislation, as SQUASH said:

The more people squatting, the stronger squatting will become.

A mass squatting movement won’t instantly solve the underlying causes of the UK’s crises. Nor will it end austerity. But it does offer solutions: an instant alternative to rough sleeping or dangerous hostels. And it’s a people-powered, community-based action that’s relatively easy to do with just a little legal knowledge.

Autumn’s now biting, and winter’s not far away. How many more homeless people need to die before something changes? This Tory-led government won’t help. There’s no safety net. Homeless charities do what they can, but funding cuts are rife.

A mass movement to occupy empty buildings around the country is one of the simplest and most disruptive grassroots direct actions imaginable to draw attention to this crisis. And more than that, it’s a massive two fingers up to this cruel and corrupt state.

If you plan to squat, make sure you’re aware of your legal rights. The following groups can give advice, support and information: