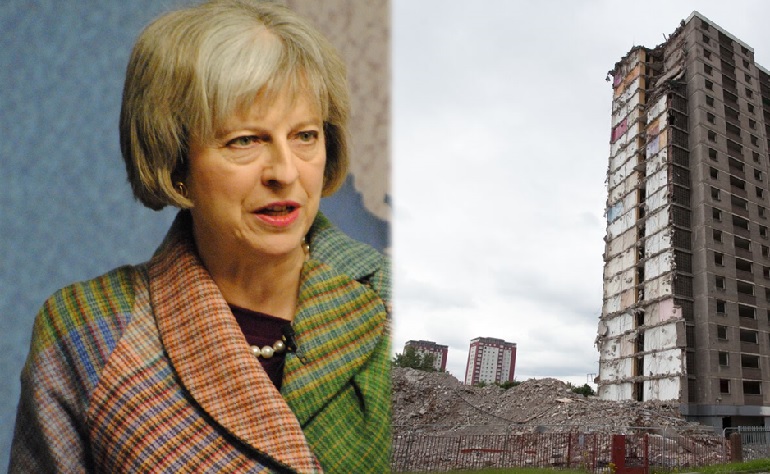 A new film explores and exposes the tragic crisis that the Tories would love to keep quiet until after the general election: the housing crisis.

Feature documentary Dispossession: The Great Social Housing Swindle is directed by Paul Sng and narrated by actor Maxine Peake. The film premieres on 8 June at the East End Film Festival. There will then be a UK cinema tour with Q&A panels from June to July to discuss the issues.

The Big Issue has called the documentary:

Perhaps the most important British film since I, Daniel Blake.

Dispossession explores the political failures that have led to the currently chronic shortage of social housing in Britain. And in particular, it looks at the ‘right to buy’ policy, so-called ‘regeneration’, the unfair stigma surrounding council estates, and the 2016 Housing and Planning Act.

The Conservative Party, however, would love to keep the issue of housing quiet during the election campaign. Since taking power in 2010, the party has focused on promising “affordable” homes without specifying what it considers affordable. Meanwhile, it has overseen a worsening housing crisis, including:

In fact, the housing crisis is so bad that it’s taking its toll on people’s mental health. And with a shed in London selling for £350,000, even one Tory MP admitted in 2016 that he’d had to move back in with his parents. But as 39% of Tory MPs are landlords themselves, resolving the crisis appears not to be at the top of the Conservative agenda.

A key issue on 8 June

In 2016, one former aide to David Cameron said that:

This housing crisis, and the related feeling of unfairness, is the one thing Labour under ­Jeremy Corbyn could use to claw itself back into power.

And indeed, Jeremy Corbyn’s Labour Party has prioritised the issue, making a number of proposals to deal with the crisis. These include creating a new Department for Housing which will oversee the building of 100,000 council and housing association homes every year, and the suspension of the current sell-off of social housing. Corbyn has said this would be one of his first priorities in power, insisting:

We need a serious national initiative to deal with the housing crisis; by building for those that need homes rather than building for speculative investment…

#WeDemand a housing market that works for the many, not just the few. Watch the longer film here: https://t.co/UCNENFi6M2 pic.twitter.com/SS2iS9iarP

The issues covered in Dispossession: The Great Social Housing Swindle

There are currently 300,000 fewer homes for social rent than 20 years ago and about 1.2 million families on local authority social housing waiting lists. In this context, Dispossession interviews a number of housing experts and activists. And between them, they insist that the housing crisis is “the challenge of our generation”; and that “housing doesn’t work if provided through the market”. They also focus on the following political failures:

Dispossession also points out the absurdity of it all, and the obviousness of the solution. It looks at how housing benefit costs have grown because of the move from social housing to the private rented sector; in other words, taxpayers are giving money to private landlords and not getting anything in return. This year alone, in fact, around £8.8bn in housing benefit will go to private landlords (and this figure has been higher in previous years).

The only solution, one commentator in the film says, is “to invest in social housing again… in the way that the post-war government invested”.

The reality today, however, is that an entire generation of young adults are finding it almost impossible to buy a house or get a council tenancy. And with secure, dignified, and affordable housing essentially out of the question, Dispossession insists that “private landlords are calling the shots once more”.

On 8 June, we have a chance to change that.

– Vote on 8 June. And strongly encourage others to do the same.

– See more on the film and the housing campaigns it supports here. Also see more on Invisible Britain, another film from the same team.

– Read more articles on the housing crisis by The Canary.