Owen Jones throws BBC bias back in its face, branding Theresa May a 'threat to national security' live on TV [VIDEO] - Canary 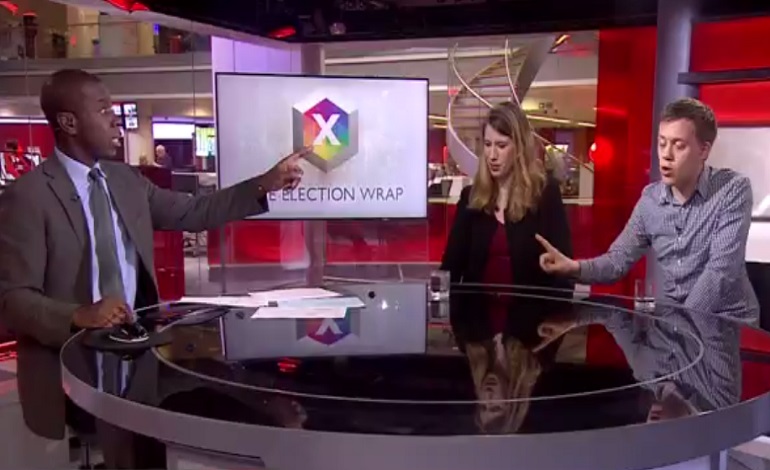 Guardian columnist Owen Jones didn’t mess around when asked during a BBC debate about police cuts and the security services. The host tried to regurgitate a now well-worn smear against Labour leader Jeremy Corbyn. But Jones flipped that smear on its head by branding PM Theresa May the “threat to national security”.

Jones was taking part in the BBC‘s Election Wrap along with Spectator journalist Katy Balls. Host Clive Myrie led the debate to talk about police cuts in the wake of the terrorist attacks in London on 3 June, which killed seven people and injured over 40. Myrie tried to swerve the conversation towards Corbyn being [6.02] “proud of the fact that he has voted down anti-terror legislation”.

But Jones hit back, with probably one of the most effective lines of the general election:

You can’t hide from the facts

Jones is right about the cuts to the police force. Because since 2009 in England and Wales, 20,000 police officers have been cut; real terms budgets have been reduced by 18%; total employment in the force reduced by 17.4%; in 2016, the number of officers on sick leave increased by 11.5%; and the number of armed officers has halved [paywall] in the past 15 years. Also, at least a third of all police stations in England and Wales have, or are due to be, closed.

And he was also right about May voting against terror legislation. For example, since 2000, Theresa May has voted against or been absent from votes on:

But Myrie wouldn’t let the issue of Corbyn and security lie. He flipped it back at Jones, saying [7.01] “I asked you about Jeremy Corbyn”. And at this point, Jones put the ball in the back of the net:

It is inconceivable that May should not hold some of the responsibility for the failures surrounding the police and security services, in relation to recent terrorist attacks. But this inconvenient truth would seem a little too unpalatable for the BBC.

Regardless of the outcome on 8 June, the issue of domestic and foreign policy in relation to terrorism under the current PM’s watch poses troubling questions. Answers are needed from May. And quickly.