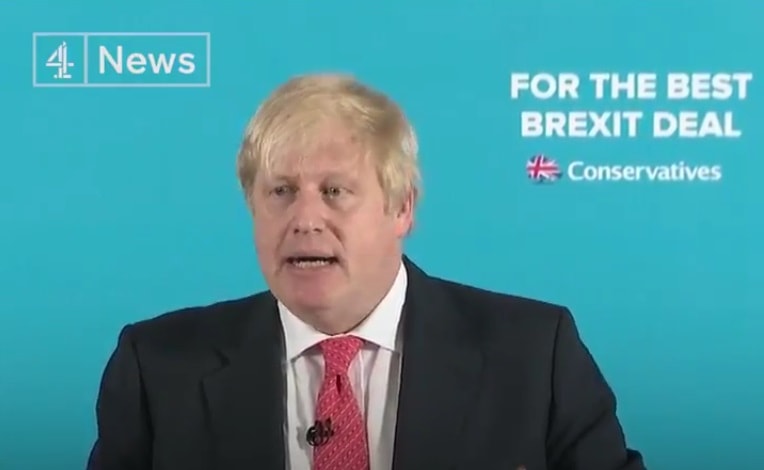 At long last, a journalist has asked the question that could sink the Conservatives after the recent terror attacks. Channel 4‘s Michael Crick left Foreign Secretary Boris Johnson in a mess after challenging him on a report into terrorist funding. The Conservatives are trying to suppress the investigation because it reportedly highlights the role Saudi Arabia plays in funding terror.

Theresa May is a strong supporter of Saudi Arabia, and her government recently approved £3.5bn worth of arms export licences. The Conservatives only issued the investigation in the first place as part of a deal with the Liberal Democrats. Now they are burying its findings, which appears to suggest the ruling party values arms sales to a foreign power over the safety of British citizens.

“Why has your govt suppressed a report on the funding of terror groups?” @MichaelLCrick challenges Foreign Sec on relationship with Saudi. pic.twitter.com/iU4EqdauWL

Mr Johnson, why has your government suppressed this report on the funding of terrorist groups, which apparently points the finger hugely at the Saudis? Isn’t it better for you, in the current climate, to confront the Saudis about this rather than cosying up to them?

The Conservative Party has a close relationship with Saudi Arabia. Tory politicians have received nearly £100,000 in gifts, trips and fees from the hereditary dictatorship.

Look I… I…  think err, you’re making a, err… valid point about the funding…

Then Johnson engaged in about a minute of empty platitudes. Speaking about institutions where “all sorts of hate-filled nonsense is being spouted”, he simply said:

we’ve got to stop that

‘You’re suppressing it, aren’t you?’

But Crick wasn’t having it:

… You’re suppressing it, aren’t you?

No, Michael. We have plenty of stuff we don’t publish.

But by the end, Johnson was saying:

We do not have any confidential report of the kind that you described.

By contrast, Jeremy Corbyn’s Labour has pledged to place UK foreign policy in line with international law. The party will end all arms sales to regimes if there is concern they are committing war crimes. Corbyn would also create a new Minister for Peace. The Labour leader said:

I see it as the next Labour Government’s task, as my task, to make the case for Britain to advance a security and foreign policy with integrity and human rights at its core.

Meanwhile, Johnson’s spluttering response shows the Saudi question really hit a spot. Voters will rightly be asking how the government expects them to believe it is serious on terror, while suppressing a crucial report to protect a foreign power. Especially given the Saudi state ideology of Wahhabism is the driving doctrine behind Daesh (Isis/Isil).

In the current climate, the appalling display of messed-up priorities could sink the Conservatives.