Just before the election, a Newsnight presenter drops a massive truth bomb about BBC bias - Canary 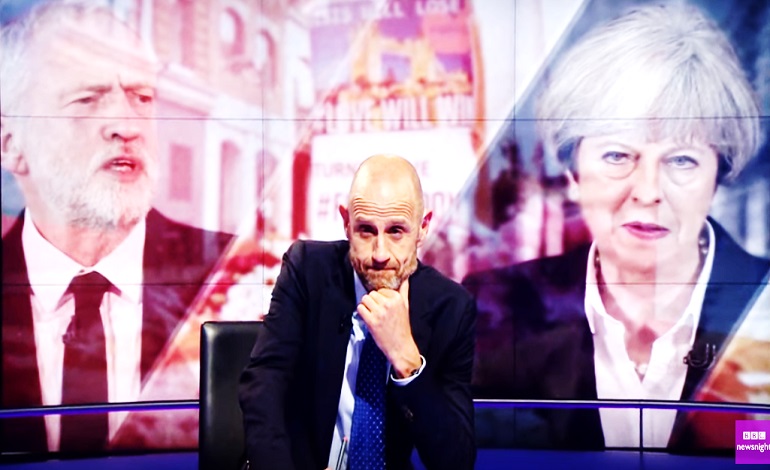 The lead host of BBC Newsnight may have just finally confirmed what many have suspected of the public broadcaster for quite some time. That it ignores accusations of bias, and is often driven by its own vested interests.

On Sunday 4 June Newsnight presenter Evan Davis was speaking at the Hay Festival in Wales. And as several media outlets documented, he reportedly made some interesting comments about the BBC and its alleged bias.

Davis said that while complaints to the BBC about bias are frequent, those in charge don’t ever seem to act on them:

All the time we get those [bias accusation] emails. And honestly, no one at the BBC takes those kinds of things into account… Maybe people at the very top of the BBC do, I don’t know. Maybe they do. But none of the people who are making programs do.

In the public interest?

And he also seemed to confirm an accusation levelled by many people at the BBC. That it’s often driven by corporate interests:

A study from Cardiff University revealed that the BBC is pro-business and conservative-leaning in its coverage. Its research showed that 11% of news sources quoted were from business and finance, compared to Channel Four News who used just 2.2% from the sector. And specifically on BBC News at Six, business representatives outnumbered trade union spokespeople by 19 to one.

Nothing to see, here…

But Davis was also frank about how the BBC does attempt to present balance in its programming:

There are some diktats at the BBC. They’ll be on certain specific things like, ‘you have to interview a Lib Dem during this part of the campaign,’ ‘you cannot not have a Lib Dem on your program,’ or ‘you can’t do this thing without having UKIP on’ or something like that… That sort of diktat is imposed, where there’s a sort of a fairness issue.

But this doesn’t mean the BBC is impartial when it comes to internal party politics. A study by the Media Reform Coalition on the so-called ‘Chicken Coup’ against Labour leader Jeremy Corbyn in June 2016 showed clear bias. Because the BBC gave double the airtime to Corbyn’s critics than to his allies at the start of the coup.

And in January 2017, the BBC Trust found that BBC Political Editor Laura Kuenssberg had breached the corporation’s impartiality and accuracy guidelines. The breach was in relation to reporting on Jeremy Corbyn and his comments over the ‘shoot-to-kill’ policy of the police.

We need a media revolution

Whatever the outcome of the general election, there is bound to be an autopsy afterwards into the role the media played in the run-up to 8 June. But instead of just the usual complaints, criticisms and then resigned shrugging of shoulders, the UK needs to have a serious conversation about its media. Because while the British media languishes at 40th in the world Press Freedom Index, we all suffer. And the marginal levels of democracy we already have in the UK are subverted even more by a press that’s compliant and servile to those in power. While screwing the rest of us over.