Tens of thousands have died in the name of austerity. A senior Tory’s response is utterly despicable [VIDEO] - The Canary 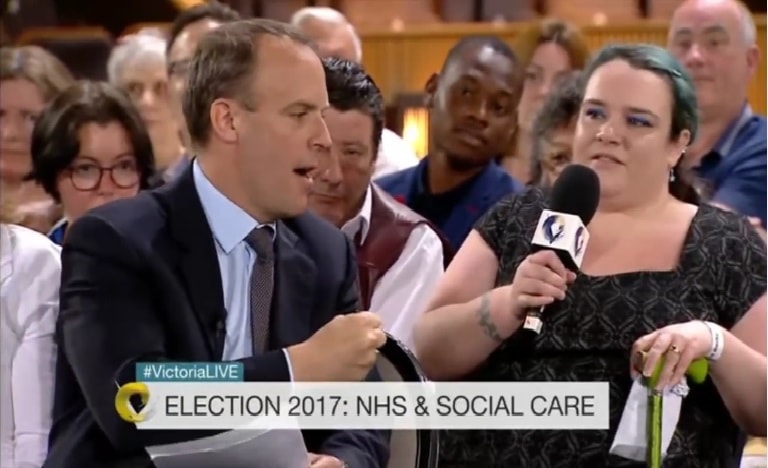 There were 30,000 excess deaths in 2015 alone in the name of Conservative austerity, according to an Oxford University report. Cuts to health and social care are likely to be the “main cause” of tens of thousands of British citizens losing their lives early. And on The Big Debate, senior Tory Dominic Raab’s response on the matter was utterly despicable.

Tens of thousands of disabled and sick people are dying every year… there have been hundreds of suicides… I spent 48 hours after the last general election trying to talk people out of killing themselves and I didn’t always succeed.

Unable to look Fiona in the eye, Raab responded:

Unless you’ve got a strong economy, creating the revenue, it’s just a childish wish list.

Fiona was unequivocal about what voting Conservative in this election meant:

This election is life or death for us. Anybody who votes for the Conservative Party, who are going to further these cuts… they are complicit in these deaths.

On the BBC, Raab appeared to make a startling admission about his government:

There are plenty of heartbreaking stories here.

That’s under Conservative rule. Then, he wheeled out the well-rehearsed Conservative justification for the cruelty:

The raw truth is that the money’s got to come from somewhere.

Previously, Fiona branded the Work Capability Assessment (WCA) an “act of violence”. Contrary to Raab’s response, the WCA has actually cost the government far more to administer than it has saved in reduced benefit claimants. In short, it actually costs the taxpayer money to put people through such trauma.

By contrast, investing in disabled and sick people is not a cost to the taxpayer. Welfare spending is not consumption, but an investment that powers the economy. As renowned economist Ha-Joon Chang lays out in The Guardian:

So welfare spending of this kind increases productivity and can empower disabled people to contribute to their communities. Yet Rabb brands such spending a “childish wish list” in the face of 30,000 excess deaths in a single year. No wonder he couldn’t look Fiona in the eye. Utterly despicable.