Watch the last two minutes of Jeremy Corbyn’s speech, that were so stunning two rainbows appeared [IMAGE] - The Canary 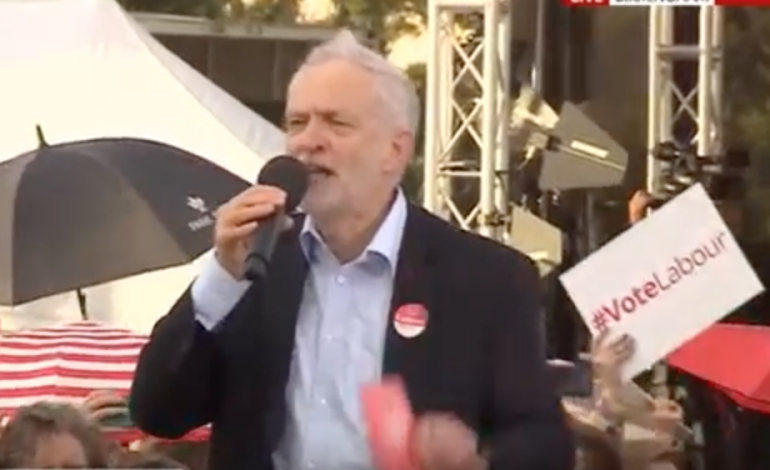 With just 36 hours to go before polling stations open, Jeremy Corbyn gave an impassioned speech to a crowd of thousands in Birmingham. The event was also livestreamed on Facebook, where its audience hit 40,000 viewers. And as he delivered his message of hope and doing things differently, two rainbows appeared:

Corbyn gave a strong and emotional speech. But the vision of hope and difference he gave in the last two minutes was stunning. Corbyn addressed the crowd:

Look around you here tonight in Birmingham… Look at each other. Look at your faces. Look at who we are. We’re young. We’re old. We’re black. We’re white. We’re gay. We’re straight. We’re men. We’re women. We’re everything. We are community.

And he described what has happened to the Labour Party:

And you’ve got a popular movement. You’ve got people coming out because they want to do things differently.

Corbyn also had a clear message for what we need to do in the next 36 hours:

But Corbyn was most moving when speaking about how we can do things differently:

Corbyn has brought something new and different to this election campaign. He’s brought integrity back into parliamentary politics. It’s seen in what he says and also what he doesn’t say. He hasn’t engaged in personal slurs and mudslinging. And his message is really reaching people, as Channel 4 News journalist Michael Crick pointed out:

Corbyn rally, Birmingham tonight. He has probably addressed bigger meetings in 2017 than any leader since Churchill pic.twitter.com/FOKWoKNXAA

And Corbyn is right. We need to spend all the time left until the polling stations close talking to people. Everyone needs to get out and vote. This speech, hours before the election, is an indication of just how much Corbyn has changed politics. This is a once in a lifetime opportunity to vote for something different. Please take it. And please make sure everyone you know takes it.

– Vote on 8 June! And strongly encourage others to do the same.