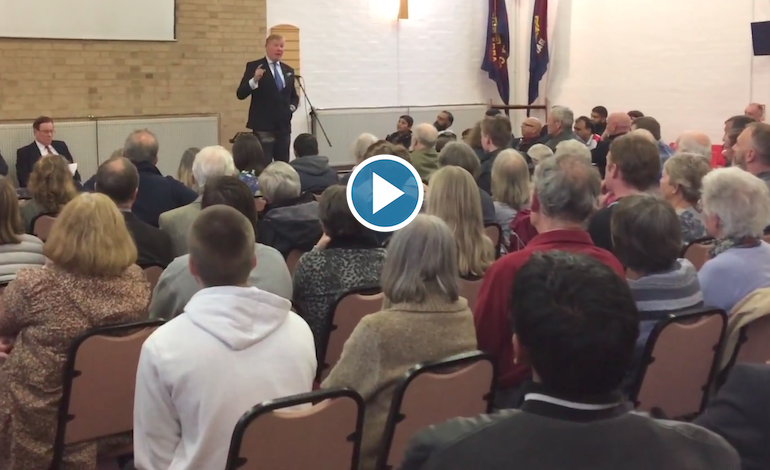 On Monday 5 June, a hustings took place in Keighley in West Yorkshire. Kris Hopkins, the Conservative candidate and incumbent MP, asked assembled voters if they really wanted Jeremy Corbyn as their next Prime Minister. He probably wasn’t expecting the response he received.

Hopkins’ speech didn’t go to plan from the start. He was heckled when he talked up the Conservatives’ abysmal record on the economy, and jeered when he accused the Labour Party of picking “bingo numbers” for its manifesto.

But things got really animated when he asked:

Do you want Jeremy Corbyn to be your Prime Minister?

The room erupted into such loud cheers and shouts of “yes!” that his final words were drowned out, and he quickly retired to his seat:

The question – and the response to it – exposes just how far the permanent political class stands from voters.

Hopkins presumably asked the question because he was expecting a horrified “no” from voters and didn’t foresee the possibility that the answer would be a resounding “yes”. And he’s not alone. The entire political class has been unable to see the popular movement happening right under its nose.

The Conservative campaign has been based on the assumption that Corbyn is unelectable, so the party didn’t have to do much to win. It just had to focus on personality (“strong and stable”) rather than policy. It could even attack its core voters and get away with it.

Some Labour candidates have also sought to distance their campaigns from Corbyn, believing him to be a liability. Back when the election campaign started, their beliefs were backed by polling experts and spouted as a self-evident truth by a media that was almost universally hostile to Corbyn, despite the fact he had confounded their expectations in not one but two party leadership elections.

But all of that has now changed. While the political and media classes keep trotting out the same old lines, the ground has shifted beneath them. It turns out that, the more voters actually get to see Corbyn, the more they like him. And the more they see of May, the more they dislike her. Theresa May’s name is now so toxic that it seems to have been taken off Conservative campaign posters. Her ratings, meanwhile, have plummeted to a record low.

Corbyn, however, is enjoying soaring ratings and record crowds. As Paul Mason has said:

The polls told her [May] she could absolutely wipe the floor with Labour. They assumed Corbyn was their secret weapon. It turns out he is our secret weapon.

The public have been upsetting the political and media classes throughout this election campaign. On 8 June, they have a chance to really upset the establishment. That chance should be seized with both hands.