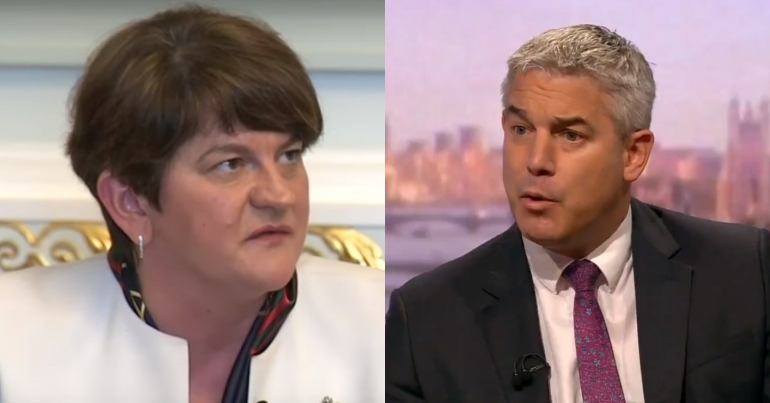 On the BBC’s Andrew Marr Show on 6 October, Brexit secretary Stephen Barclay indicated that the UK government could “rethink” its latest Brexit proposal to the EU, that would allow the DUP to veto EU alignment on the island of Ireland. And while Barclay’s announcement could be dismissed as mere rhetoric, it does expose how vulnerable the DUP is in current Brexit negotiations.

As The Canary reported, Boris Johnson’s current Brexit proposal to the EU would leave the north of Ireland fenced in by two borders. This is because the north would leave the EU customs area, along with the UK, but it would stay in the EU single market area on agriculture and food products, along with the south of Ireland. It would also follow EU single market rules on agriculture and food products under this plan.

However, staying within the EU single market area is dependent on the northern government agreeing to do so. This is problematic for a number of reasons. Firstly, the north’s government, the Northern Ireland Assembly, has been suspended since 9 January 2017. Sinn Féin blames the DUP for this.

Secondly, even if the Assembly was to reconvene, a mechanism introduced by the Good Friday Agreement (GFA) known as a petition of concern could prevent the north following any EU rules at all. The GFA introduced this petition to prevent one community discriminating over another by allowing it to block contentious legislation. But it also has the other effect of allowing one community to impose a veto on the other.

A petition of concern would therefore mean that certain legislation, such as the north adhering to EU single market rules, might not pass through the Assembly without Sinn Féin and DUP support. The petition only requires the signature of 30 Members of the Legislative Assembly (MLAs) to succeed. As there are 40 unionist MLAs, all of whom support Brexit, these MLAs could use this power as a veto.

The Irish government fears the DUP would use its power to veto. And worse still, Johnson’s proposal doesn’t detail what would happen if the DUP did so. But it could mean the north and the south would operate under different rules on food and agriculture, thereby making life very difficult for people living on the island of Ireland.

If the UK government removes this possibility from the DUP, it would mean no veto. But it would also leave the DUP somewhat powerless on Brexit. When it comes to broader UK politics, the DUP is a one trick pony. And it’s a pony that, if speculation comes to pass, could lose seats at the next election. This would confine it to complete irrelevancy.

Long way to go in such a short space of time

The clock is ticking on the UK’s Brexit leave date of 31 October. In fact, it’s even shorter given there’s a vital EU summit on 17 October. Realistically, all parts of a new Brexit puzzle need to be in place for that summit. And Barclay’s ‘rhetoric’ also demonstrates the clock could be ticking for the DUP.