If ever there's been a time to stand with Jeremy Corbyn, it's now - The Canary 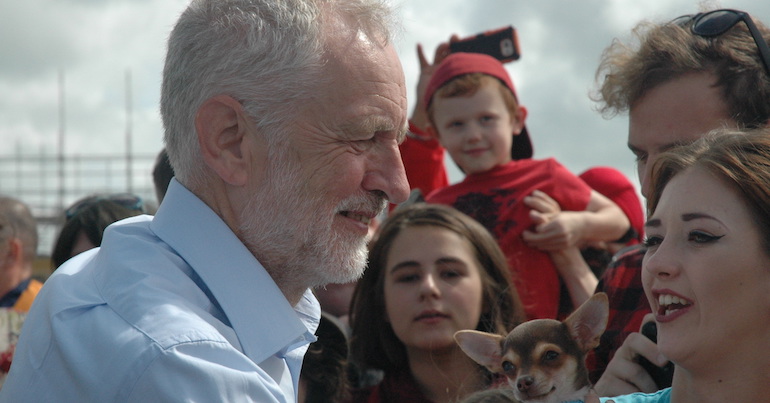 The right-wing press is in full attack mode against Jeremy Corbyn. Again. It’s now churning out rumours about a “soft coup” against the Labour leader. After four years of attacks, and perhaps with a general election looming, this isn’t surprising. Because in all honesty, the attacks never stopped. But now, more than ever, it’s vital for the grassroots supporters who elected Corbyn to stand strong. We need a Corbyn-led socialist government, and the establishment’s throwing everything it has to prevent that.

I Stand With Corbyn

On 13 October, the Sunday Times ran a story that said shadow chancellor John McDonnell is:

leading a “silent coup” against Jeremy Corbyn amid claims that he has replaced the Labour leader in all but name.

And, of course, the right-wing press jumped all over this. Some divisive Labour MPs like Jess Phillips, meanwhile, had already thrown their names into the hat.

But afterwards, the hashtag #IStandWithCorbyn began trending on Twitter. This level of support is one thing the right fails to dent. Because despite constant smears and misrepresentation, grassroots support for Corbyn remains strong. In fact, as one Twitter user pointed out, no matter how hard they try, Sunday Times owner Rupert Murdoch or the establishment media can’t force people to abandon Corbyn:

Jeremy Corbyn has had 4 years of character assassination from the press.

The thing is, I don’t abandon someone because Rupert Murdoch tells me to. If we don’t have principles as a voter then we shouldn’t expect MPs to have them either.#IStandWithCorbyn

Others, meanwhile, pointed out the simple fact that Corbyn’s a twice-elected leader with a huge mandate:

Corbyn is leader of the biggest political party in Europe, with an overwhelming mandate from Labour members. For 36 years in Parliament he's been honest, consistent and unstoppable. Why would we want a change?🌹#IStandWithCorbyn#IStandWithJeremyCorbyn pic.twitter.com/1bUpAVQRez

Disgusted by rumours of a silent coup.

Jeremy Corbyn is our leader. We chose him twice. Emphatically. When I was homeless, the Blairites didn't care. Corbyn truly does.#IStandWithCorbyn because he fights for me everyday & I'll fight for him with everything I have.

And as Johnson’s Brexit carnage continues, aided and abetted by the Lib Dems, others pointed out that Corbyn’s solution is the only option that acknowledges both sides of the Brexit debate:

“Any political leader who wants to bring the country together cannot wish away the votes of 17 million who wanted to leave, any more than they can ignore the concerns of the 16 million who voted to remain…” pic.twitter.com/d4nONDPpft

Labour voters made it clear that, even if there is another coup underway, they’ll stand by Corbyn no matter what:

I'll apologise now for any offence I may cause with this tweet. I don't swear on here often. That said.

If any of the bollocks I'm hearing is true, it's time to go for the hat trick and take down coup number 3. #JC4PM

Hi all, I really don't want to say this, but I'm hearing convincing accounts the soft coup rumours are true. Up to you whether you believe it, but if you want to show support to @jeremycorbyn please use the hashtags #IStandWithCorbyn or #IStandWithJeremyCorbyn in your tweets ✊

Coup or no coup?

That there’s another attack on Corbyn isn’t in doubt. But who may be behind a ‘third coup’ remains unclear.

The right wing seems intent on pointing the finger at John McDonnell. And the shadow chancellor certainly didn’t do himself any favours by agreeing to an interview with Tony Blair’s former communications chief Alastair Campbell. Despite Campbell’s goading questions in the GQ interview, McDonnell didn’t attack Corbyn. When asked what may happen if Labour lost the general election, McDonnell said:

What we’d do is as the tradition, which is have an election for a new leader.

Not really rocket science. But the establishment media leapt on his response and reported on little else. Corbyn’s now defended his position, saying:

John gave an answer to an interview that he undertook. My answer is this: I am leading this party to go into an election. We have hundreds of thousands of members determined to win that election.

Sky News has since claimed to have seen internal emails suggesting certain jobs within Corbyn’s office may be under threat. Apparently, one Corbyn ally said “a faction loyal” to McDonnell had launched a “political power grab under the radar”.

However, some people remain sceptical about the accuracy of Sky‘s reporting:

A Corbyn-led government will challenge the powerful and the privileged. And that’s always going to be where the attacks come from:

Just look at those trying to stop him.

They aren’t on our side.

They are on the side of a system that works for the privileged few.

Power & wealth are inextricably linked; @JeremyCorbyn knows this & wants to change this.

Don’t throw away this chance.

We’re just a whisper away from a general election. So the millions of people who do support Corbyn need to hold strong, ignore the establishment, and make sure he becomes prime minister.