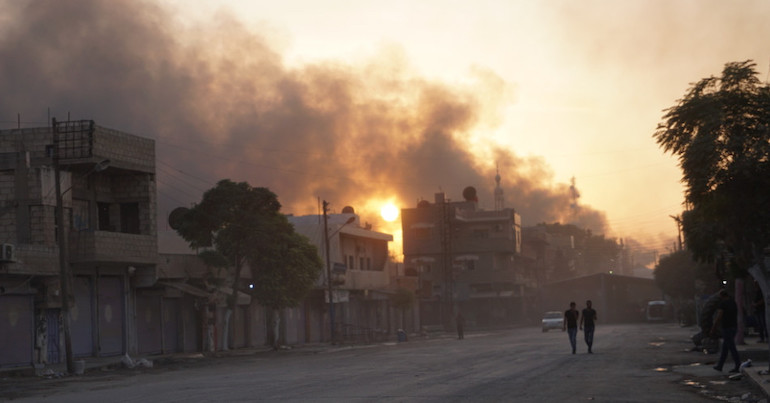 On 9 October, Turkish leader Recep Tayyip Erdoğan launched an illegal invasion of largely-Kurdish areas in northern Syria (aka Rojava). And the latest reports indicate that Turkey has killed at least 39 civilians and injured over 100.

A report from the Kurdish Red Crescent (KRC) reveals the brutality of this invasion. Between 9 and 13 October, Turkish forces and bomb attacks killed at least 39 civilians and injured at least 132. Harrowingly, this isn’t the full number, because as the report notes:

Many of the Dead could not be registered because of… distortion.

Nor does it include casualties and fatalities from the latest airstrikes in Serê Kaniyê (Ras al-Ayn) on 13 October.

Those recorded as dead – or “martyred” – include:

Among the injured are:

So far, this invasion has also displaced over 190,000 people. Turkish forces targeted the main water station in Alok, leading to water shortages in a key area and affecting a number of hospitals. Electricity and phone signals are also reportedly “decreasing”.

As the fight was coming so close, the security team of the camp… announced that they were not able anymore to control it.

Kurdish Red Crescent, which is the main health responder in the camp, had to leave as well due to security issues…. ISIS [Daesh] supporter were carrying weapons with them (seems they had it before).

By 4pm that day, a Turkish airstrike hit the centre of Serê Kaniyê, a densely populated town. This attack:

caused 11 deaths and 74 injuries at least, among them civilians and reportedly a number of international journalists, but we think the number of the victims will increase because there were a lot of… injuries.

By then, casualties had to go elsewhere because the hospital was full.

Khalaf was reportedly tortured and executed. A graphic video purportedly showing the circumstances of her death is circulating on social media

Some people who shared this video called the invasion “ethnic cleansing”.

I’m not going to share the video of human rights activist #Hervin_Khalaf after she was raped and stoned to death.

But I will say, I never want to hear a DAMN WORD out of @IvankaTrump’s mouth about women’s rights. She is Lady MacBeth, and this blood will not wash off her hands. pic.twitter.com/4YdknlKLYH

The SDF reportedly said Khalaf’s murder showed that “the Turkish invasion does not differentiate between a soldier, a civilian or a politician”.