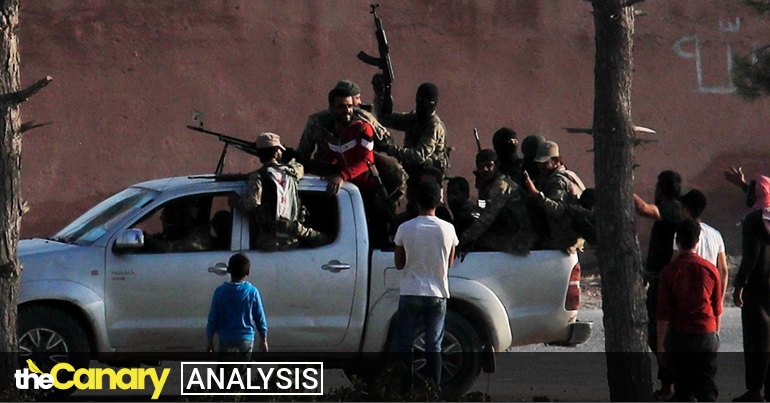 The Syrian army has now deployed near the Turkish border. This came hours after Kurdish-led defence forces in northern Syria (aka Rojava) said they had reached a deal with Damascus to help them resist Turkey’s illegal invasion.

On Monday morning, Syria’s state news agency said that the army had moved into the town of Tal Tamr, which is about 12 miles from the Turkish border. Tal Tamr is a predominantly Assyrian Christian town that was once held by Daesh (Isis/Isil) before Kurdish-led forces liberated it. Many Syrian Christians, who make up about 10% of Syria’s pre-war population of 23 million, left for Europe over the past 20 years, with the flight gathering speed since the country’s conflict began in March 2011.

Political talks between Rojava and Damascus have long been on the table but there has so far been no agreement. And according to the Rojava Information Center, the current deal is “on a military basis” rather than a political one:

We have spoken to two diplomatic officials with knowledge of negotiations, they said:

It also said the autonomous administration in Rojava had “requested Americans to leave to clear the way for Russians to control airspace” in order to “remove Turkish-backed forces”. However, it clarified that “much of the detail of the agreement – particularly on the civil and political side – remains unclear”.

Rojava has forged a green democratic revolution in the middle of Syria’s brutal war. Its system is feminist, socialist, and opposes all religious and ethnic discrimination. And both militarily and ideologically, it played a key role in defeating Daesh in Syria. Over 11,000 Rojavan fighters died in this war.

In late 2014, Daesh besieged the blockaded Rojavan city of Kobanî as Turkey watched from across the border. But the city’s local defence forces resisted for much longer than anyone expected, eventually defeating Daesh. And this got the world’s attention. Amid almost total destruction in Kobanî, for example, the US finally decided to give strategic support to these forces in their fight against Daesh, after isolating them for years. There was no meaningful political commitment, but there was a temporary military alliance to defeat Daesh. While some criticised Rojava for accepting this support, Daesh would almost certainly have taken control of Kobanî and other areas, leaving death and destruction in their wake. In short, it was a pragmatic survival tactic.

Under Donald Trump, however, that pragmatic connection has ended. And while the Syrian government (like the US) has blood on its hands, a deal with Damascus now seems to be the only realistic option Rojava has for survival.

In the decades before Syria’s current war, the Assad dynasty had improved health indicators (its healthcare system was reportedly “the envy of the Middle East”). It also displayed consistent support for Palestinians against Israeli occupation, while receiving praise for its secularism. But its Ba’ath regime was always authoritarian, repressive, and corrupt. And it increasingly took a neoliberal path in the 21st century – cutting public spending and allowing increased privatisation. These ‘reforms’ contributed to decreasing living standards and growing public anger.

The absence of citizenship rights for the country’s Kurdish population, meanwhile, left 300,000 to 500,000 people stateless for decades. The Kurdish language was also prohibited under the Ba’ath party; and an Arabisation policy saw Arab settlers arrive in Kurdish communities and town names changed. Bashar al-Assad only took measures to address these issues after the start of the 2011 protests against his rule.

In Syria’s ongoing war, hundreds of thousands of civilians have reportedly died; and different groups recording the statistics agree that the Syrian government is responsible for most of these deaths.

But as in 2014, Rojava faces a simple choice; it can either deal with Assad’s government, or face death and destruction at the hands of NATO’s second-largest army.