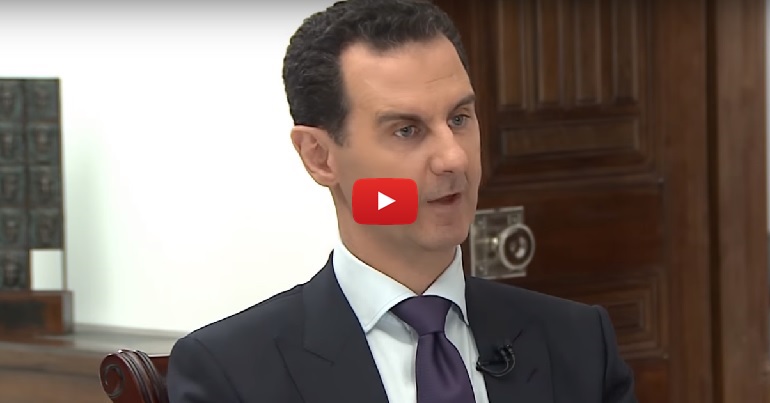 On 31 May, RT published an exclusive interview with Syria’s Bashar al-Assad. And in it, Assad issued an ultimatum to Kurdish anti-terror forces in northern Syria.

According to one analyst who spoke to The Canary, the resulting process could potentially mark the beginning of peace in the country.

In the interview, Assad referred to the Kurdish-led Syrian Democratic Forces (SDF) as his ‘only remaining problem’.

The SDF has been one of the most effective Syrian ground forces in the battle against Daesh (Isis/Isil) in recent years. The main forces within the SDF are the progressive and mostly Kurdish YPG and YPJ of northern Syria (aka Rojava). These militias have also been protecting the formation of a democratic system in the north – one that is secular, feminist, multi-ethnic, and opposed to religious discrimination.

The West and its regional allies had isolated these forces for years, but they soon gained international media attention because of their strong resistance to Daesh. Western governments gave them limited strategic support in this fight from late 2014 onwards. They have since defeated Daesh in its de facto Syrian capital of Raqqa.

Regarding the subject of the SDF, Assad told RT:

We’re going to deal with it by two options. The first one: we started now opening doors for negotiations. Because the majority of them are Syrians and, supposedly, they like their country; they don’t like to be puppets to any foreigners… So, we have the same basis…one option is to live with each other as Syrians… If not, we’re going to resort to liberating… those areas by force.

What does this mean for Syria and the SDF?

To discuss Assad’s ultimatum in more detail, The Canary spoke to Macer Gifford – a British citizen who has volunteered in northern Syria with the YPG, the SDF, and their allies in the Syriac Military Council (MFS).

First, we asked how the SDF was likely to respond to Assad’s comments. Gifford said:

It seems more of a negotiation tactic than anything else. The message is clear: nothing is off the table – including an attack. Carrot and stick diplomacy.

I think the preference and the eventual outcome will be a settlement.

This preference would make sense, as the SDF and its grassroots supporters have long called for its inclusion in Syria’s peace talks.

We then asked what influence the US was likely to have on the process.

And one thing in particular that Gifford pointed out was that Assad is actually doing a well-known Trump move: making threats and promising destruction as a last resort (i.e. his tactics with North Korea). But he also insisted:

It seems like the negotiation for the future of Syria is beginning.

We then asked Gifford if he thought one option during negotiations would be to offer Syrian Kurdistan a certain amount of autonomy within Syria – as happened with Iraqi Kurdistan, which gained autonomy but stayed within Iraq after the 2003 invasion.

We also asked how Turkey – which has played a key role in the intensification of Syria’s conflict and has brutally attacked Kurds both at home and abroad – would respond to potential negotiations between Assad and the SDF. And we asked if Britain would have any sway in the process.

And on the topic of Turkey, Gifford spoke of the potential concessions both the SDF and Assad might have to make during negotiations. In particular, he mentioned the areas in northern Syria that Turkey invaded earlier in 2018. And he insisted that, in these complex negotiations, there would likely be some very difficult decisions to make.

The Turkish issue could be key

Gifford mentioned that, if all the main regional and international players involved in Syria could somehow unite around the issue of Turkey’s occupation of northern Syria, they could put significant pressure on it diplomatically and push it out of Syria completely. This, he said, would be in the interests of peace in Syria.

When The Canary asked if such united pressure on Turkey was likely, Gifford noted that Ankara would do all it possibly could to stop it from happening. He also pointed out that Turkey’s allies in the West would likely pursue a policy of appeasement towards the Turkish government. And for these reasons, a united effort to push Turkey out of Syria would be difficult to achieve.

Gifford, however, implored Western leaders not to fall for Turkey’s manipulative tactics, and to put the best interests of Syria first.

Overall, it seems most likely that the SDF will respond positively to negotiations with Assad. But these will not be easy. And they’ll involve some difficult decisions.

Further escalation, however, is not a solution to Syria’s conflict. Assad’s hands aren’t clean, and neither are those of his enemies. And after the war, the international community can and should hold those responsible for war crimes to account. But if innocent Syrian civilians are to have the peace they desperately need and deserve, there will need to be negotiations and compromises. So the beginning of such talks is well overdue.