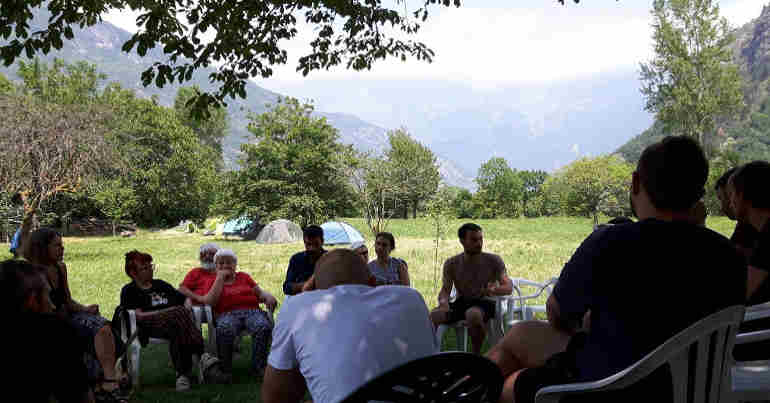 Ecological activists from Switzerland, Italy, Britain and Germany gathered in the Italian Alps between 28 and 31 June in solidarity with a green revolution in northern Syria (Rojava).

The aim of the gathering was to make plans for the international ‘Make Rojava Green Again’ campaign (MRGA).

The Canary asked a MRGA activist currently volunteering in Rojava whether the campaign’s name is a play on Donald Trump’s ‘Make America Great Again’ slogan. He said:

Campaigners hosted the gathering in the Susa Valley in northern Italy. The valley is the site of a three-decade-long ecological struggle against a high-speed train line – the TAV – from Lyon in France to Turin in Italy. Local people argue that the train line will cause irreparable damage to this beautiful Alpine environment. The Canary attended a presentation on the last day of the gathering where the valley’s ‘No-TAV’ movement was sharing ideas and experiences with the MRGA campaign.

The ecological ‘pillar’ of the revolution

The 2012 Rojava revolution has reorganised society in northern Syria. Decisions are made by federations of grassroots communes in a system called Democratic Confederalism. The three key concepts of the Rojava revolution are direct democracy, women’s freedom, and ecology.

MRGA is an international campaign which focuses on the ecological pillar of the Rojava revolution.

Before the Rojava revolution, the Assad regime encouraged reliance on monoculture to try to ensure that Rojava could never become a viable separate entity. At the same time, other types of agriculture – like the planting of fruit trees – were banned.

This monoculture was very heavily dependent on water – and on chemicals and fertilisers, some of which have been banned in Europe.

The MRGA campaign aims to help put the ecological ideas of the revolution into practice by creating alternatives to monoculture agriculture. As one internationalist volunteer told the gathering:

We carry out research with people living in [Rojava] about the way they used to live, how people used to work with animals and with nature.

We have created a tree nursery where we have collected [many] types of tree, some of which didn’t exist any longer in Rojava.

We have been carrying out practical work with a commune in the next city of Derik, planting trees on the river banks.

We have also set up a greywater project at the Internationalist Commune to re-use waste water. And we are working in the city of Qamişlo to build up the waste recycling system there.

Another MRGA activist told the gathering:

We… try to exchange and share knowledge about low-tech technologies, which can be democratically managed and governed. This knowledge is particularly useful because of the effects of the embargo on Rojava on technological development.

A long-term ‘No-TAV’ campaigner, meanwhile, told the gathering that:

Over 30 years of struggle, we have learnt that we can’t wait for governments…

Another thing we have learnt is to listen to the experiences of other struggles and learn.

We share a lot of solidarity with the struggle for Democratic Confederalism [a form of direct democracy] in Rojava because, like our movement, it is a struggle of the people from the bottom up.

Toward a global ecological revolution

Overall, the gathering was an inspiring opportunity for internationalists to discuss playing a part in making Rojava green again. But it was also a chance to come together in nature, at a site of struggle against ecological devastation, and begin to envision a truly ecological revolution in Europe – and further afield.

The author is part of the Shoal Collective: a cooperative producing writing for social justice and a world beyond capitalism.