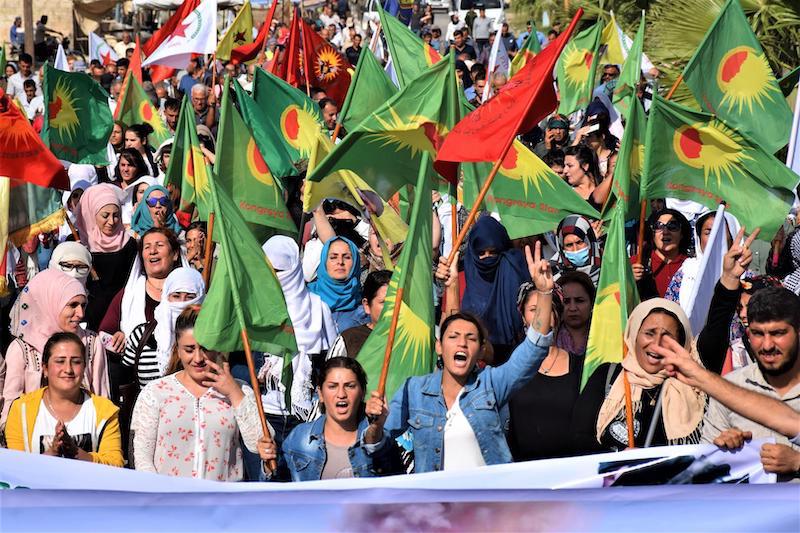 On 8 October, a member of Women Defend Rojava (WDF) spoke exclusively to The Canary from on the ground in Rojava. She gave further insight into the current situation, but her words also offer a vital reminder of why it’s so important for all progressives to oppose this invasion, and why solidarity for Kurdish people and women is so very important.

Rojava is a multi-ethnic but mostly Kurdish part of Syria. Since early on in Syria’s war, the region has led a green democratic revolution. Its system is feminist, socialist, and opposes all religious discrimination. And it’s played a key role in defeating Daesh in Syria, gaining limited support from the West in the process.

Women from Kongra Star started the WDF “to co-ordinate international resistance” in solidarity with women and “against the occupation war of the Turkish state”.

we understand the threats on the revolution in North and East Syria to ultimately come from all nation-states and from the forces of fascism and capitalist modernity.

It can take the form of invasion, attacks by jihadist gangs, but also special warfare, assimilation, and neo-colonialism.

“When we defend Rojava, we are defending ourselves”

Berivan told The Canary that the WDF “isn’t just about solidarity”. “Because,” she said, “the values of the revolution here are crucial to the future of humanity and to defeating patriarchy.” She continued:

When we defend Rojava, we are defending ourselves. And self-defence can take many forms – from education and information-sharing to community building, to action in the streets or in a war.

As the attacks started, Kongra Star called on “all women worldwide” to oppose Turkish fascism:

#Turkey's war on NE-#Syria has started. We are on the ground in #Serekaniye, protesting against Turkish attacks. Now Turkish airplanes are bombing villages nearby.

We resist together with #YPJ #YPG & call all women worldwide to rise up against Turkish fascism.#WomenDefendRojava https://t.co/NfmnQKuGaI

Berivan explained that, even before this latest attack, “women always take the front and have a strong presence” in daily marches and demonstrations. And the power of these actions can’t be underestimated. As she said:

Other things stand out as well: the presence of music, dancing, a sense of joy in resistance even when combined with furious anger.  When the women of Kongra Star are not out in the streets they are raising awareness, organising education, discussing on doorsteps and in classrooms, and focusing on the needs of women in society.

Women’s self-defence doesn’t begin or end with a crisis situation.

“What Turkish fascism wants to destroy is still strong”

As The Canary reported, ahead of the invasion, many people started “maintaining permanent human shield protests along the border”. As Berivan explained, these human shields are mostly led by women and this has huge significance:

Day to day here, we are connected to the women’s movement so we are out in the streets seeing how women and people are organised against the current threats. You really see the strength in society as the basis of the movement here.

Because as she stated:

Without society, the movement has no meaning. So when there’s an action like the ‘Living shield’ at the border, it’s much more than just symbolic.

It’s demonstrating that exactly what Turkish fascism wants to destroy is still strong.

“Struggling for freedom wherever you are is defending Rojava”

What Berivan really emphasised, though, is that the wider fight everywhere for women and women’s rights is part of a far wider struggle:

Here and in Europe, we say ‘Women Defend Rojava’ because it’s only through gender liberation that a society can become free.

As she so vitally and importantly stressed:

Fighting for gender liberation at home is also defending Rojava.

It’s essential we follow the example of the revolution in North and East Syria and put anti-patriarchy at the centre of our struggles.

Struggling for freedom wherever you are is defending Rojava.