Don't trust the US government, even if it's helping you fight Daesh - Canary 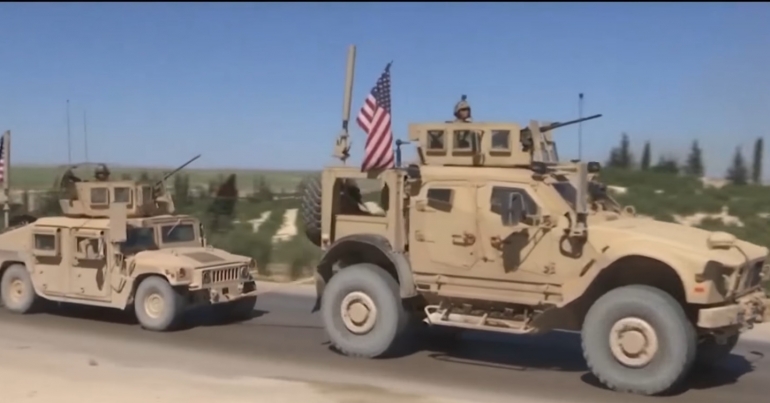 The author of this article is Conor Mason (pseudonym) – an international volunteer with the Kurdish Red Crescent (‘Heyva Sor‘) aid organisation based in northern Syria.

Strategic military cooperation between the US military and the Kurdish-led Syrian Democratic Forces (SDF) in northern Syria has doubtless been key in driving Daesh (Isis/Isil) out of the territory. It has also likely restricted Turkey from intensifying its invasion beyond the Afrin region which the SDF previously held.

Washington’s Middle Eastern foreign policy, however, is not about defending Kurdish rights or the progressive democratic system developing in northern Syria. And as one politician from northern Syria told The Canary in an exclusive interview, people there are fully aware of that.

People can reshape their own countries without foreign interference

US following in the footsteps of 20th-century colonial powers?

Former CIA and NSA director Michael Hayden bullishly described the US perspective on the ongoing Syrian conflict in an interview with Kurdistan 24 in July, insisting that:

post-World War I state structure in the Middle East is gone. And it’s not coming back… [at least not] in its previous form, where countries like Iraq and Syria were unitary states.

Just as colonial predecessors created such ‘unitary states’ in the first place at the start of the 20th century, it seems Hayden sees Washington’s policy-makers redrawing the political maps of the Middle East in much the same way today. “We need to be creative,” he insisted, as he proposed the formation of several “stable,” ethnically divided political “entities” from the dissolution of Iraq and Syria.

Alongside the “rump state” of Syria would be an Arab “Sunnistan”, and an Iraq “with a predominantly Shi’a identity”. In his eyes, a united Kurdistan would bring together the predominantly Kurdish areas of northern Iraq and Syria. But the US would need to consult with Turkey to ensure it was “comfortable with” any such creation.

Hayden failed to mention, however, that Iraq’s Kurdistan Regional Government (KRG) opposes northern Syria’s democratic confederalist project. The latter doesn’t call for a separate ethno-state, and it explicitly rejects the nationalism of the KRG.

Hayden also failed to mention NATO ally Turkey’s military assaults on northern Syria’s budding system of direct democracy. And there was no talk of the Turkish regime’s war crimes against Kurdish people both at home and abroad.

In short, it’s business as usual. Because foreign powers imposing their own versions of ‘stability’ in the Middle East has never been about peace. Nor has it ever been about serving the interests of local people.

“Stability,” as Hayden refers to it, is diplomatic code for ensuring compliance from so-called ‘friendly’ states and limiting opposition from ‘unfriendly’ ones.

Frances Brown, a former adviser on the White House’s National Security Council, clarified the issue in an opinion piece co-authored with ‘defence’ analyst Melissa Dalton. They argue that US investment in Syria has a clear strategic basis, saying:

Failing at stabilization would greatly undermine other U.S. objectives, including deterring further Iranian involvement in Syria and Iraq [and] competing with Russia for influence and access…

there is also the basic problem of leverage. Without continued U.S. military and civilian engagement, we will not have a relevant voice on any possible political solution.

And the US government’s recent commitment to an indefinite presence in Syria seems very much about remaining a “relevant voice” in the Middle East.

An exclusive northern Syrian perspective on US intervention

‘Short-term tactics for a long-term strategy’

Rojava, known today as the Democratic Federation of Northern Syria (DFNS), has a role to play in America’s plans – however temporary.

With a socio-political model advocating communal democracy and women’s liberation, Rojava is seemingly a world away from imperial power plays. The political leadership here, however, is under no illusions as to the nature of its relationship with the US.

America has both a long-term and short-term plan. You might say they use tactics in the short term to advance a long-term strategy.

Fighting terror allows the US to play its geopolitical games

Our relationship with America is dependent upon the situation in Syria. We started to work together after the war in Syria started and Daesh appeared.

The Kurdish-led SDF militias have now forced Daesh out from most of the territory they formerly held in north-eastern Syria. But Daesh’s remaining numbers and recourse to terror tactics render them an unpredictable and persistent threat. The SDF’s ongoing fight against Daesh will be essential in securing the safety and stability of Rojava in the longer term. And according to Mustafa, this situation also benefits the US:

In the short term, it helps America to have the Kurds as military allies. The fight against Daesh allows the US to maintain a presence in northern Syria. America wants to cut off Iran’s influence in Syria. That’s why they are trying to set up a presence in the North East.

US-Turkish alliance is here to stay, and Rojava is fully aware of that

Turkey is still too important for the US to ignore

The US-Turkish alliance is central to Washington’s long-term presence in the region, however. And that fact is not lost on Mustafa:

The exhaustive media coverage over the recent breakdown in relations between Ankara and Washington emphasises the mutual value of the alliance.

In an August opinion piece for the New York Times, Turkish president Recep Tayyip Erdoğan threatened to “start looking for new friends and allies” should the US not comply with his demands to end its cooperation with Kurdish-led military forces in northern Syria. US president Donald Trump responded by vowing to increase metal tarriffs on Turkey.

Despite Trump’s gloating over the subsequent fall in the value of the Turkish Lira, the purpose of his measures is not to damage the alliance. The mutual threats, for example, have since cooled. The US is simply reminding Erdoğan that, despite his ambitions, he remains the junior partner in the relationship; and that Erdoğan has overstepped by conducting an arms deal with Russia and challenging US military ‘sovereignty’ in Syria.

In short, there are few who doubt the importance of Turkey in Washington’s long-term strategic planning.

We know Turkey is an ally of the US, and America will not damage that because it suits them in the long term. They don’t care [who is in government in Turkey], they are only concerned with keeping Turkey as an important ally.

Moreover, diplomatic relations between the two NATO allies go back decades. And at the same time, Mustafa explains that the US has shown no willingness to acknowledge Rojava/DFNS as a political entity. He said:

They only speak about the military side. They say ‘[the Kurds] have courage, they are strong, they do a good job in Rojava’. But [the US] does not speak about the political side.

He then insisted that the US should:

But Washington has offered no such acknowledgement. It has simply increased its military presence in northern Syria as Syrian president Bashar al-Assad and his Russian allies prepare for an attack against rebel-held Idlib.

Look to Rojava for a solution – not to the US

The US chooses not to stop Turkey’s war crimes. That is sufficient proof that it has little interest in standing up for Rojava.

Foreign powers vying for influence in Syria have provided little to no assurance for the long-term security of Rojava’s people or their democratic project. And to expect the US to back Rojava would mean ignoring both history and the political realities defining the current conflict. When it suits the US to leave, it seems highly likely that it will, regardless of the consequences for the people of Rojava.

US tolerance for Turkish war crimes against Kurdish communities should dispel any doubts over its motivations in Syria. Because Washington doesn’t have to turn a blind eye to Erdoğan’s misdeeds. It could pressure Turkey to withdraw its forces and mercenaries from northern Syria by leveraging its economic and political power. But it chooses not to.

The spat between Turkey and the US will likely end with a begrudging handshake. But in the broader scheme, the NATO allies have little to quarrel about.

Defence against the odds is a speciality of the people here in Rojava. Kurdish-led defence forces continue to actively resist the Turkish invasion of Afrin. Meanwhile, people strive daily to build upon their democratic project through meetings, communes and cooperatives across the region.

Persistent foreign interference can only bring more division and war to the Middle East. Self-determination for the people of Rojava, and the wider region, can only come by their own hands. And those of us in the West who support the progressive project in Rojava must remain vocal opponents of our own government’s criminal behaviour.

– Write to Theresa May and your MP and demand they cancel current arms sales to Turkey and stop approving further sales until Turkey completely withdraws from Syria. Support Campaign Against Arms Trade to help make that happen.