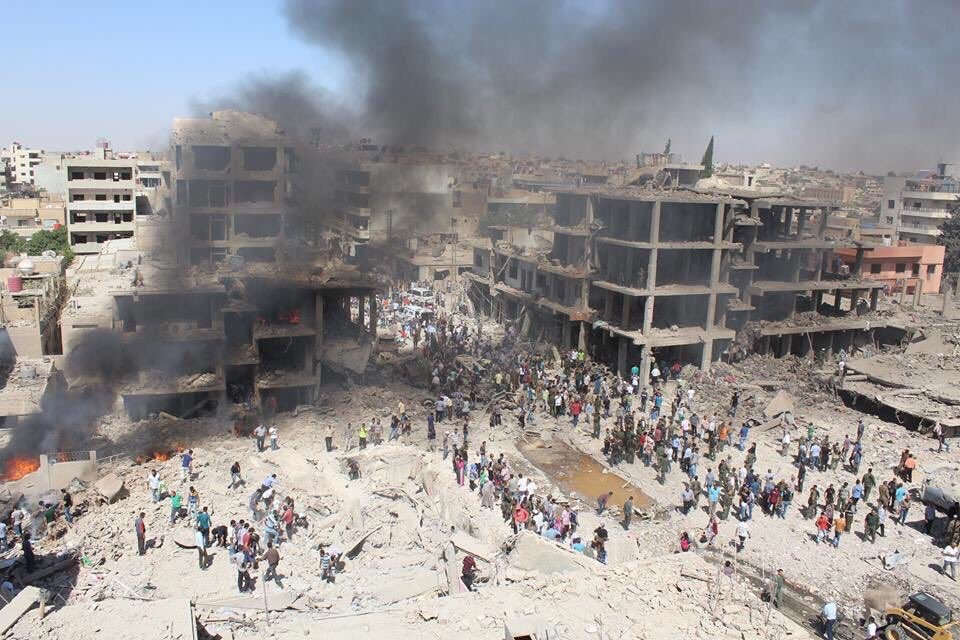 On the morning of 27 July, a bomb-laden truck exploded in a crowded area of Qamişlo in Rojava (northern Syria). This terrorist massacre, claimed by Daesh (Isis/Isil), killed at least 44 people and left around 150 more injured. Many surrounding buildings were destroyed, and among the dead were a number of women and children.

The city of Qamişlo was named as the proposed capital of the self-declared federal system of ‘Rojava and Northern Syria’ earlier in 2016. A multi-ethnic city of Kurds, Arabs, Assyrians, and Armenians, it’s on the other side of the Turkish border from the city of Nusaybin – one of the largely-Kurdish communities in Turkey which has been destroyed in recent months by NATO’s second biggest army.

Daesh quickly claimed responsibility for the massacre of 27 July, claiming it was in retaliation for a Rojava-led military operation aimed at closing the final link between Daesh and Turkey in Syria. The attack hit an area close to a local police centre and a nearby government building, but many of those who died were civilians.

Starting at the end of May, the Syrian Democratic Forces (SDF) – the army of Rojava and Northern Syria – encircled and entered the city of Manbij, which is still under Daesh control. The focus of defeating Daesh in Manbij is to cut off the group’s Syrian capital – Raqqa – from Turkey. This offensive has been covered recently in the western media, but with minimal focus on the progressive and democratic struggle of the SDF.

As well as retaliation, the attack on Qamişlo may also served as a distraction from the Manbij Offensive or, as the Rojava Cantons General Coordination has argued, an attempt to obscure Rojava’s successes – such as gender equality, secularism, and direct democracy.

But Rojava has been under attack from Daesh and other jihadi groups in Syria since long before world leaders started to recognise their existence in 2014. And according to the Movement for a Democratic Society (TEV-DEM), which is the most influential political coalition behind the Rojava project:

Our people will give the most ideal response to these inhuman terror groups and the powers supporting them by strengthening their unity and further embracing the values of revolution.

The importance of the Manbij Offensive

The SDF was ready to launch an attack on Manbij early on in 2016, but the USA encouraged it not to do so largely because of Turkish opposition to its presence around Manbij. As Rojava has been blockaded by Turkey ever since 2012, the SDF very much relies on its tactical cooperation with US airstrikes to boost the impact of its committed ground forces. For this reason, it heeded American advice.

But because pushing Daesh back in Syria would be welcomed as such a big achievement in a pre-election USA, the Obama administration eventually ignored Turkey’s requests and gave the SDF the go-ahead at the end of May.

While the Manbij Offensive is essentially an SDF operation, it is led by the 3,500 fighters of the Manbij Military Council (MMC), 3,000 of whom are local Arabs from Manbij. Like the SDF, the MMC is a multi-ethnic organisation, and also includes Kurds, Circassians, and Turkmen.

On 27 July, as MMC forces approached the centre of Manbij, one fighter said:

More Manbij youths join us as we move forward. People have joined us because they see that the power of ISIS gangs has been broken.

Indeed, local people from the area have spoken of their happiness since liberation from Daesh. And one reason for this is that, although Daesh has delayed the offensive by using civilians as human shields, MMC fighters have opened humanitarian corridors in order to rescue civilians – many hundreds of whom have been brought to safety and away from the warzone in recent weeks.

We are trying to be precise and sensitive because of civilians. We are going to liberate the city when the time is right.

Terrorism will not stop the liberation of Manbij, and Rojava’s fight against Daesh will continue

After Raqqa, Manbij is the second largest city occupied by IS in Syria. Militarily and in terms of contact with the rest of the world, Manbij is of strategic importance. Manbij connects the gang group to the rest of the world and to Raqqa. For this reason our offensive to liberate this city is a big step towards the liberation of [Raqqa].

The terrorist attack in Qamişlo will not change anything. The people of northern Syria will continue to liberate their communities from the oppressive rule of Daesh. And they will keep resisting the seeds of division and hatred that these chauvinist jihadis seek to sow. That is the nature of Rojava’s political model, which is not just about self-defence but about forging an inclusive, democratic, and egalitarian alternative.

So while Daesh seeks to kill and enslave all who get in the way of its chauvinist mission, Rojavan forces will keep liberating and empowering them. And no amount of terrorism will stop them from dreaming and fighting for a better future.

See the author’s interview with an inhabitant of Qamişlo here.

See images from the aftermath of the attack below:

– For more information and background on the situation in Rojava, see related Canary articles here.

– Ask Theresa May and your MP to officially recognise and support Rojava, to delist the PKK, and to push the Turkish regime to stop its war on Kurdish communities.

– Learn more about the inspiring process underway in Rojava in this introduction book or this detailed investigation.