The Daily Mail recently published a story about Syrian refugees on the Scottish island of Bute, claiming they were depressed and that it’s “full of old people and where people come to die”. However, local residents have taken to Facebook to discredit the story and show how welcome refugees are on the island.

Local resident, Lisa O’Donnell, emailed the editor of the Scottish Daily Mail to complain about the article. She stated:

The Syrian families contacted you but to highlight problems regards unemployment and council issues, not the Isle of Bute itself or the people, young or old.

Through language, syntax and dialogue devoid of any inflection (and badly translated – despite your seeming efforts) your paper published an article making the family seem ungrateful and by implication not worthy of the safe haven provided for them on Bute, which is entirely in keeping with your newspapers right wing agenda reflected in all the nonsense you published during the EU ref.

I hope people from my Island share my post, but only to help this family who have been shamefully abused and manipulated by the conservative right wing horror that is The Daily Mail. A journalist came to the Island basically and wrote this article based on information received from a local refugee with very limited English skills. It is clear to me what has been lost in translation. This family miss their home and the life they once lived before the war. The father in the article observes Rothesay is where people go to die, what he probably meant is Rothesay is where old people go to retire but this was leaped on by a nasty journalist to pen something the man didn’t mean to imply and given he probably saw houses bombed and innocent children slain on Syrian streets it’s fairly unlikely he said something like this. He also says the Island is beautiful, but it is not his home and it’s okay for him to say that because it’s not. If his family have been humbled by charity and he feels embarrassed then this is a human response and I would feel the same if my independence was taken from me and I could not provide for my family and had to rely on other people. He once owned a shop, was a man of property, this family has lost a great deal. Of course they are allowed to grieve that, but the deliberate misinterpretation of that grief by the DM is designed to incite hatred by making the family appear ungrateful and don’t doubt it. It is a shocking abuse of power and could lead to violence and I think we can agree this family have been through enough. People in Rothesay have been very supportive of the refugees and I really hope the good people of Bute will extend that generosity by seeing this trash for the manipulative right wing rhetoric it is. Don’t let the Daily Mail infiltrate our pure waters by bringing hate to our wee Island, encouraging people to bully and harm this family or any family who are going through so much already adjusting to the new world they occupy. As you can see the family have been photographed, despite idiot journalist not naming family for apparent concern for their safety, so if you are from Rothesay be kind and show your real hospitality by preventing ignorant bullies from having their way. Take care of our Syrian friends. I know most people on Island appalled by this article, but also aware there will be those minorities who will use it as an excuse to vomit nasty politics which could be harmful to our community.

However, not only has her post been shared thousands of times, it has also been picked up by other residents showing support for both the family in the article and other families living there: 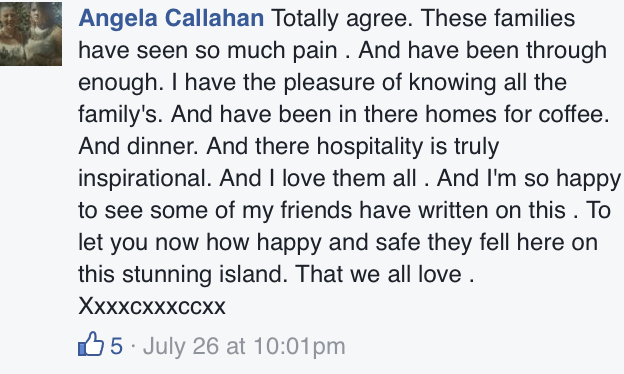 But perhaps the most moving responses have been from the refugee families themselves living on the island who have responded to the post: 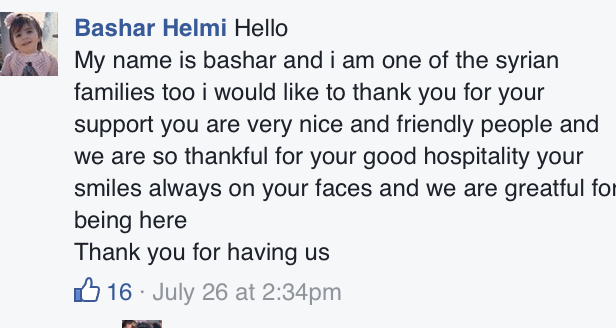 It should come as no surprise that this so-called newspaper is peddling this hate filled nonsense. They have produced one screaming headline after another abusing and dehumanising refugees.

However, this beautiful, heartwarming response shows humans and communities at their best. Accepting, welcoming, empathic and supportive. It is very far from the hate mongering perpetuated by papers such as the Daily Mail and is a message we all need to spread far and wide.