A socialist peer-to-peer lending group has been viciously trolled and attacked by Owen Smith supporters – after it was wrongly accused of “buying votes” in the Labour leadership election.

Gimme 25, a closed group on Facebook, was formed to financially assist people who were struggling in the present climate, and specifically Labour supporters. The site said from the outset that it was apolitical, and did not want any involvement in the leadership election. According to its page, it is:

An experiment in direct socialism. We all go through tough times in our lives, and sometimes if you just had £25 to help towards something important it would make all the difference. There are many other people who could probably spare £25 for someone who needs it much more than they do. This group is about bringing those two categories of people together. Don’t think of it as begging, just think of it as direct socialism, and an acknowledgement that we really are all in this together.

However, the group soon caught the eye of website Guido Fawkes, who ran an “expose” on it. Guido quoted from the above statement but said that “it avoids explicitly saying that the money will pay for votes for Corbyn. But the intention is clear”.

Soon, however, the attention that the Gimme 25 group were receiving began to turn sinister. Namely in the form of trolling and abuse from a particular Owen Smith supporter. The Canary has taken the decision to conceal the identity of the person involved.

The person infiltrated the group anonymously, with seemingly the sole intention to orchestrate a smear campaign against it: 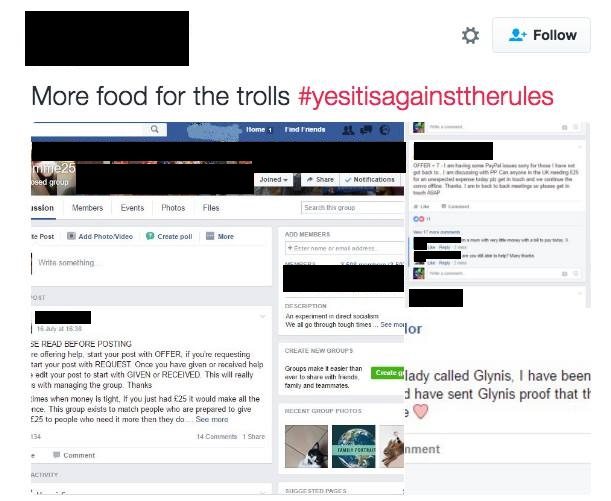 They began a somewhat relentless campaign against the group, claiming it was nothing more than a front for buying people Labour membership: 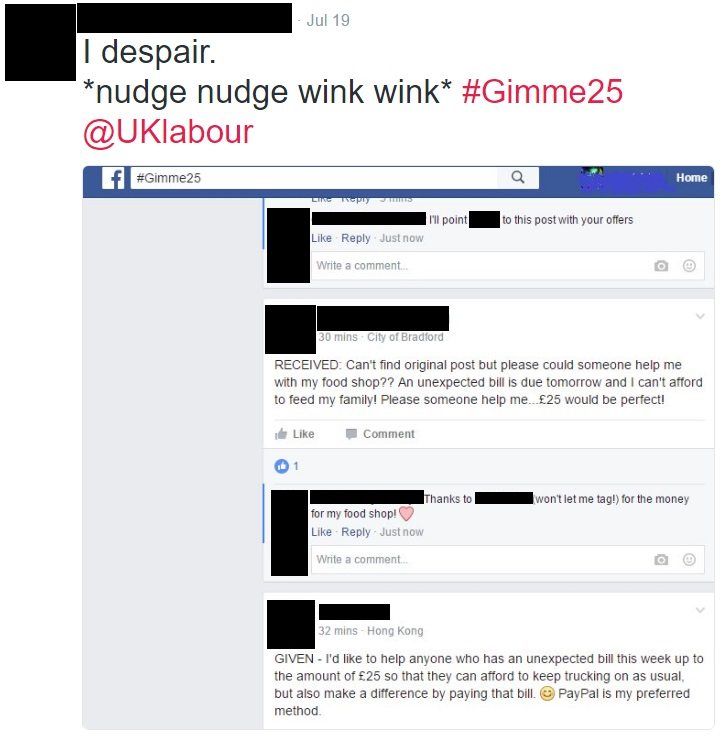 This is something the group admins strongly deny, and assert that in such instances they have attempted to stop such behaviour: 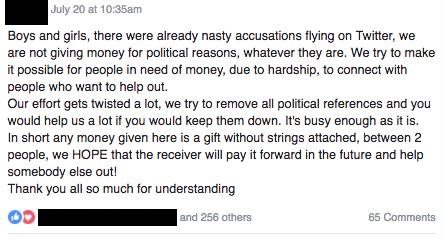 However, the Smith supporter, most worryingly, chose to publish screen grabs with the names and private email addresses of those in need of financial assistance, or who were willing to donate. We have retracted all names involved: 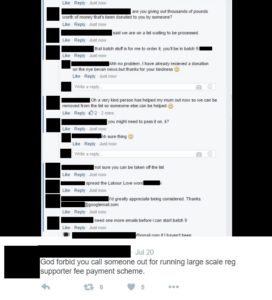 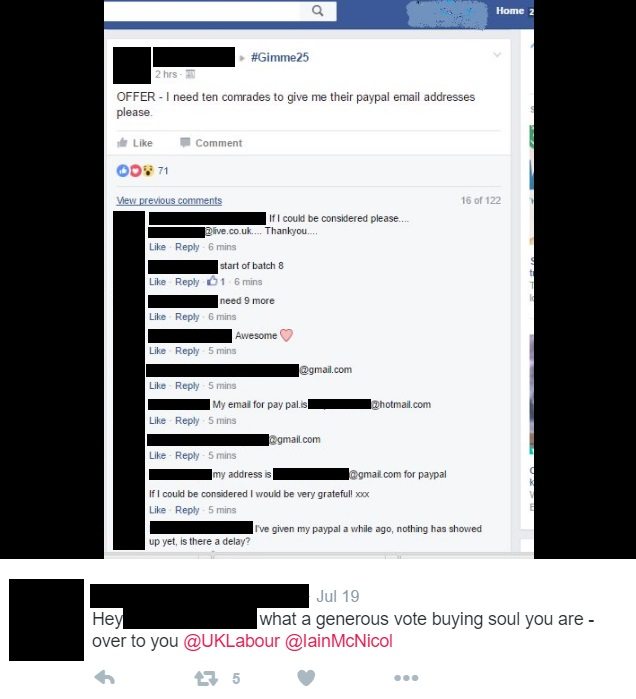 When questioned about the fact they had published sensitive, personal information from a closed Facebook group, which included people’s email addresses for their PayPal accounts (potentially leaving them open for fraud or identity theft), the perpetrator didn’t seem to care:

What is most concerning about the individual targeting the Gimme 25 group, is that they hold quite an important position in a registered UK charity (we have, again, redacted their details). When confronted (via Twitter) by admins of the group regarding their employee’s willingness to release individual’s private information, including sensitive email addresses, the charity responding by blocking them.

One of the people involved in Gimme 25 is comedienne Mel Moon, who complained directly to the charity involved: 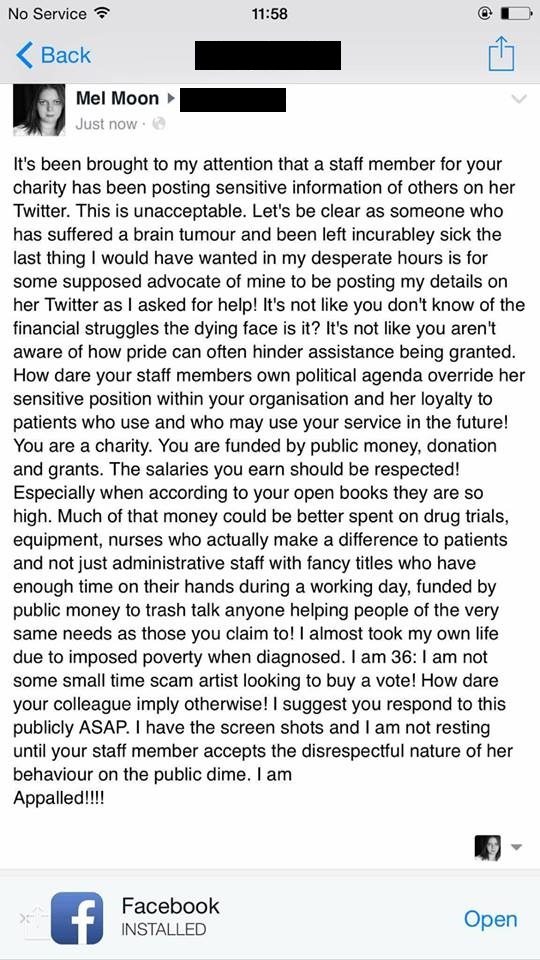 One of the group admins, who wished to remain anonymous, spoke to The Canary. They said:

I’m shocked that vulnerable people were exposed. If this person thought it was vote buying, why not contact Labour quietly instead of endangering people who have serious problems by dragging something out of a secret group and posting it on Twitter? People are devastated by what this individual has done, out of nothing more than spite. It’s been absolutely horrible. I’m outraged that trying to do something humanitarian is treated like a political agenda.

A formal letter of complaint has been sent by a Gimme 25 volunteer to the charity involved, but they have so far received no response: 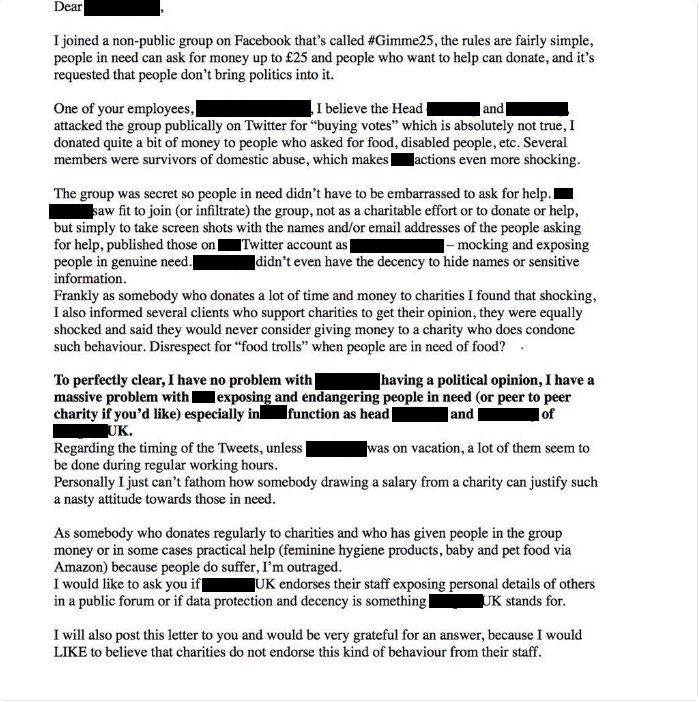 While trolling, abuse and defamation of character on social media is nothing new, this particular incident highlights the lengths some people will go to, to garner political leverage over their rivals.

When a group of individuals set-up a fundraising page, with the intention of helping those less fortunate, only for it to be systematically targeted, the level of discourse in the Labour movement has plumbed new depths. And it’s even worse when it manifests from an individual who cites “charity” as their full-time occupation.

Support a local food bank near you.