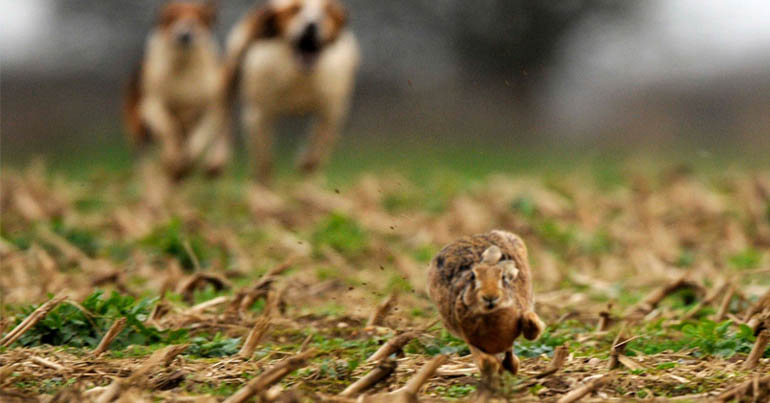 On 18 November, the Labour Party published its latest plans to tackle illegal hunting in England and Wales. The Conservative Party also made its stance on the issue clear on the same day. Nearly 15 years after hunting was supposed to have been consigned to the dustbin of history, this ‘minority pastime‘ still plays a role in election campaigning. And the way that parties have responded to it reveals the very different hearts beating at their cores.

Shadow environment secretary Sue Hayman described Labour’s animal welfare manifesto as the “most radical animal welfare plan anywhere in the world”. Points affecting hunting include a new ‘recklessness’ clause, closure of “loopholes… that allow in practice the continuation of illegal hunting”, and the removal of research and observation clause used by stag hunts. It also plans to review penalties for illegal hunting as well as expanding rural crime policing units.

This would shake up the Hunting Act. Labour’s plans reflect ideas that many anti-hunting campaigners have long called for, such as the need for a recklessness clause. This would stop hunts side-stepping responsibility for killing by claiming it was an accident. Hunts too often claim animals killed during a hunt were the result of hounds straying from an alleged trail.

For example, documents I read while writing a piece about the Blencathra Foxhounds on Lake District National Park Authority land showed the hunt consistently portraying dead foxes as having been chased and killed after the huntsman lost control of the hounds. Because of this, despite dozens of chases and kills over seven years, the hunt faced no repercussions. A recklessness clause could change that.

Increasing penalties could also help successful prosecutions feel more worthwhile. When Ipswich magistrate’s court prosecuted members of the Thurlow Hunt in March, the huntsman’s penalty for illegal hunting was a £150 fine. Even the headline-making Heythrop Hunt prosecution brought by the RSPCA in 2012 was paltry. It landed the guilty huntsman with a £250 fine per charge of illegal hunting. And when Nottingham magistrate’s court sentenced two members of the Meynell and South Staffordshire Hunt on 21 November, the pair each received a £350 fine. It was the second time members of the hunt had been prosecuted for illegal hunting.

Upping these penalties and introducing custodial sentencing may remind hunts of the gravity of their actions. Certainly, this is what the League Against Cruel Sports (LACS) believes, saying Labour’s plans would make the Hunting Act the “effective deterrent it should always have been”.

There are problems in Labour’s proposals, though. The most obvious is that, for any of the above to apply, evidence of illegal acts has to be gained in the first place. Hunt saboteurs and monitors are most likely to get this evidence as they spend multiple days a week, many months of the year, following hunts across the countryside. But there aren’t enough activists to cover every meet by every hunt in the country. LACS recently estimated there are 10,700 hunting days per year. But this number only counts 191 foxhound packs. Taking harrier, staghound, beagle, basset, and minkhound packs into account, the total number is more like 350. Sabs and monitors can’t be at all of these. Once a hunt realises nobody’s watching it, the gloves will come off.

Labour promises to double the number of rural crime officers from 88 to 170. But how much would this impact illegal hunting? These officers also have duties beyond the Hunting Act, including tackling other serious wildlife crime such as raptor persecution and hare coursing.

Moreover, there are questions over the complicity of certain police officers or forces with hunts. West Midlands Hunt Saboteurs, for example, allege that Operation Blackthorn actively disrupts the attempts of sabs to prevent hunts from killing animals. The group claims Operation Blackthorn is led by Leicestershire Police and involves several other forces. I have written about the questionable relationship between North Wales Police and local hunt supporters. In May 2018, fellow Canary writer Mohamed Elmaazi revealed that one police unit had listed sabs in a counter-terrorism guide. And a document published by CAGE, which fights state discrimination of Muslims, revealed that Surrey Police also included sabs in a 2015 counter-terrorism document. Increasing policing of hunting has the potential for increasing the harassment of people trying to hold hunts accountable.

Furthermore, Labour’s plan also doesn’t address the harm caused to animals used for hunting, such as the thousands of hounds that hunts kill because they are “unsuitable”.

Yet Labour’s promises better reflect those that oppose hunting than most other parties. A YouGov poll commissioned by LACS revealed cross-party backing for a recklessness clause and custodial sentences. Even Tory voters agreed with these ideas at a rate of 51% and 55% respectively. It’s no surprise then that the Conservatives appear set to ditch a long-running pledge to give parliament a free vote on repealing the Hunting Act.

This seems to be as far as the Conservative Party is willing to go on the hunting issue, though. And what’s important here is what isn’t said. As I’ve already outlined, hunts operate today much as they did before the activity was banned. A pledge not to hold a repeal vote goes no further than not changing the status quo. That simply allows hunts to continue hunting as they do today. Given the slew of bad press and court cases that hunting has faced over the past few years, this is the best that hunts could ask for.

Before writing this article, I contacted all the major parties as well as the Brexit Party. Labour provided its press release while the Lib Dems said:

a Liberal Democrat government would not bring forward legislation to change the Hunting Act.

The Green Party didn’t respond, although it’s 2019 manifesto says it will “ban all hunting. This includes trail hunting, where dogs are used to track foxes who are then shot”. This appears to conflate the Hunting Act with the Scottish government’s Protection of Wild Mammals Act. Nonetheless, a total ban would be the ideal end result. But I’m not sure the Green Party will ever get enough clout within the awful parliamentary system to even have the proposal entertained.

The Conservatives also didn’t respond to my query. Nor did the Brexit Party, although based on its other environmental policies, and Farage’s love of hunting, I could guess at what it’s position is:

As a result, it makes Labour’s flawed plans for the Hunting Act the best one available. Its claims show that the party at least understands animal rights concerns and is willing to speak out on them. The Conservative response is an insidious sleight of hand, but with its legacy of U-turns, I’m not sure we can trust them even to hold to this.

The Hunting Act has a role to play in the ‘diversity of tactics’ against hunts. It gives legal recognition to the cruelty, viciousness, and abuse that hunters and their goons mete out to wildlife. But the fact is none of the parties offers policies that go far enough. Anything short of a law that shuts down the kennels completely will not properly hold hunts to account. Only direct action will do that.

Support your local hunt saboteurs – they put themselves in harms way to protect our wildlife by enforcing the Hunting Act 2004. Our police will enforce the law against hare coursers but seldom do so against hunters. pic.twitter.com/xf5TznnkI3