As if it was possible, Labour’s £54bn pledge for WASPI women makes Johnson look even worse - Canary 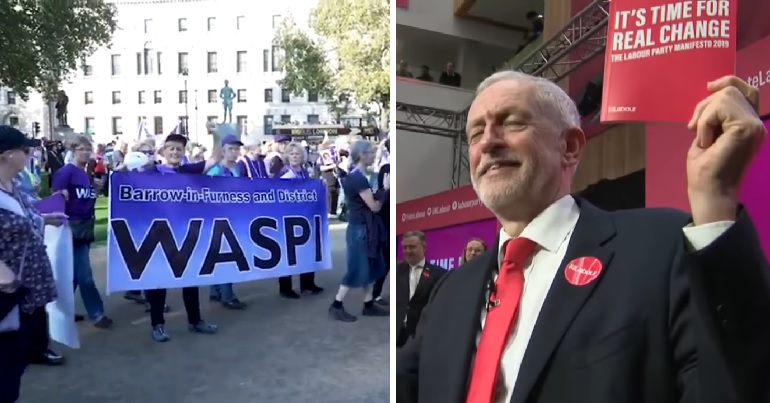 In a hugely significant development, Labour has pledged a solid £58bn to compensate so-called WASPI women (Women Against State Pension Inequality). They face huge pension losses as a result of Tories increasing the retirement age to 66. This change affected an estimated four million women. Labour’s latest announcement is therefore predicted to have a considerable impact on the outcome of this election.

During the Leaders Special broadcast on the BBC on 22 November, an audience member asked Boris Johnson if he’ll help those women affected. Johnson squarely evaded the question and said:

I cannot promise that I can magic up that money for you.

Given the amount of money this government has ‘magicked up’ for a host of other issues – such as £6bn for Brexit planning – Johnson’s claim is disingenuous at best. But more so, he and his government keep failing to take responsibility for the problems their policies have created.

And his refusal to help WASPI women may play a vital role in this election. As Joanne Welch, founder of Backto60 told the Independent:

There are almost 6,000 women born in the 1950’s in each constituency across the country on average. If the incumbent MP’s majority is slim, then they can easily sway the result of that constituency.

The Conservatives’ disdain for ordinary people is becoming increasingly clear in this election. Whether through Johnson’s refusal to help WASPI women or the home secretary’s dismissal of the government’s role in creating poverty.

Speaking on The Andrew Marr Show on the BBC on 24 November, Labour’s Angela Rayner highlighted how this government has effectively ‘stolen’ these women’s pensions. Rayner said:

The Conservatives with the Liberal Democrats stole this money from those women who were born in the 1950s. It’s completely unacceptable. And millions of women have been plunged into poverty, and don’t just want handouts by social security, they want their money back, and quite rightly so. They should be feeling angry about what the government did. And we will right that injustice because justice is a price worth paying.

The Tories and Lib Dems stole the pensions of @WASPI_Campaign women. #Marr pic.twitter.com/QKpJQaefgh

The retirement age increase is yet another example of how working-class and vulnerable people don’t feature in the Conservatives’ priorities. Changes proposed in 2011 were supposedly a measure to reduce the government’s budget deficit. However, the media and campaigners have refused to be silenced on this issue. Because these changes disproportionately affect millions of women born in the 1950s.

When Labour’s manifesto was launched, there were initially some concerns that commitments to WASPI women were not specific enough. But this latest announcement doesn’t just address these criticisms, it goes further. And it does so in a way that puts Johnson and the Conservatives to shame.

WASPI women can rest assured that they have a specific, meaningful pledge from Labour if the party comes to power in this general election.