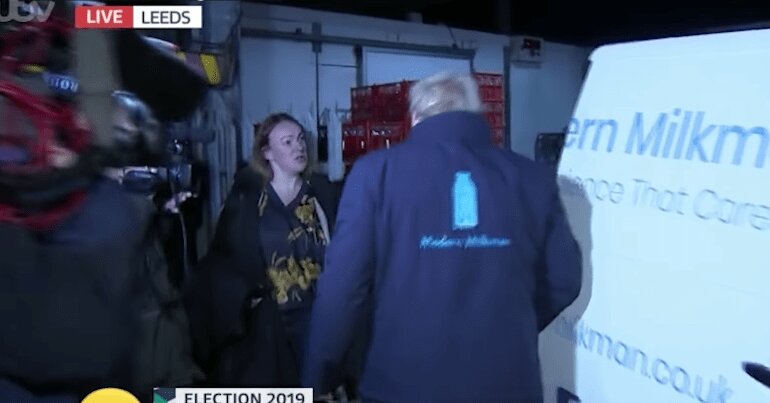 Boris Johnson took over the news agenda on 11 December but perhaps not in the way he’d like. After Good Morning Britain reporters tried to ensure Johnson followed through on his promise of an interview, the sitting prime minister hid in a fridge.

Can’t even defend his record to the corporate media

But the ITV broadcast wasn’t the only critical interview Johnson dodged the day before the election. The Conservative prime ministerial candidate skipped scrutiny again and refused to appear on BBC Radio 2:

Boris Johnson has refused to follow the other six leaders who have taken part in the leader interviews @BBCRadio2. His staff constantly told my producers — until this morning — that he was "very likely" to come on. Today we were told he couldn't, and no reason was given.

Despite the fact the corporate media is generally pro-establishment, Johnson still can’t even perform on his home turf. This has been a pattern throughout the election. Back on 24 November, the Conservative leader refused to attend a head to head debate against Jeremy Corbyn on Channel 4.

Voters will rightly be thinking ‘what’s Johnson got to hide?’. In another dodge, he wouldn’t even look at a viral photo of a four-year-old boy that NHS staff were treating on the floor due to lack of beds. Bed shortages under Conservative rule are forcing the NHS to cancel cancer surgeries. Instead of engaging, Johnson took the journalist’s phone and put it in his pocket.

The BBC has behaved like a Tory PR office – still he can’t face them!

But perhaps the most high-profile dodge of the election was Johnson refusing to face BBC presenter Andrew Neil. In this election the BBC has favourably edited footage of the Conservative leader a number of times. These include editing out audience members both laughing at Johnson and making difficult points, while also playing the 2016 Remembrance Sunday footage of Johnson laying a wreath instead of the 2019 footage where he placed his wreath upside down. But still, Johnson can’t even face this broadcaster in an interview.

The Tory leadership dodging scrutiny hardly stops there either. Johnson was supposed to attend a Channel 4 leaders debate on climate change but he and Nigel Farage refused to turn up. Meanwhile, the Conservative government has been rolling out fracking against the will of local communities and climate scientists say it has been “deliberately weakening environmental protections”, according to the Guardian.

Then, on 8 December, Channel 4 empty chaired both the Conservative and Brexit parties after they again wouldn’t face scrutiny.

If Johnson can’t even defend his record or face a corporate media biased in his favour, how can anybody vote for him? Theresa May’s 2017 performance suggests that Robot-style campaigning doesn’t really fly in modern politics. People want to know what you actually think and whether you’re just another chancer in a suit. And, to be frank, I think that’s what Johnson is.