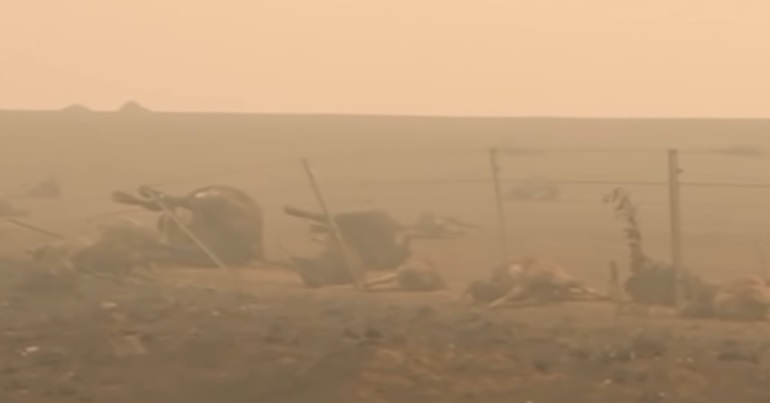 CORRECTION: This article was updated in several places at 5pm on 17 January following a complaint from a reader. The updates added more of the colonial context around the introduction of camels to Australia, made clear that the justification for culling often relates to the protection of native flora and fauna, and emphasised that the solutions to the climate crisis may not be quick or easy.

Wildfires have ravaged the country since September 2019, due in no small part to the human-induced climate crisis. At least 26 people have died in the avoidable tragedy. But compare that to the loss of life of non-human animals: 1.3 billion of them have potentially perished. In short, for every human life lost, 50 million animals have likely died.

Many Australians have responded by putting themselves in harm’s way to save the remaining animals. But South Australia has disturbingly decided to cull thousands more wild animals amid the crisis.

A mass cull (killing) of wild camels – a species introduced by white settlers in the 19th century for human use – in South Australia’s north-west started on 8 January. The camel population in the region has reportedly increased during the dry season, as camels have headed there in search of water. The South Australian Department for Environment and Water (DEW) claims the animals are a pest on three levels:

In some cases, dead camels have contaminated important water sources and cultural sites

So, as the camels head to water sources en masse, the authorities have arranged for professional shooters to mow them down from helicopters in their thousands. The expectation is that shooters will kill between 4,000-5,000 within a week.

More culls are likely to follow. But Australia isn’t a stranger to such actions. A planned cull of thousands of camels back in 2009 provoked anger from animal welfare groups, who urged the authorities to opt for more humane solutions.

Of course, Australia isn’t the only country in the world which culls with enthusiasm. The British government began a badger cull in 2013, justified by the spurious argument that killing badgers would stop TB among cows. The cull has expanded over time, rising to an “unimaginable scale” in September 2019, despite conservationists and scientists standing in opposition to it. As the Badger Trust’s Dominic Dyer explained in 2019:

This year will take the number of badgers killed since the cull started to over 130,000, pushing the species to the verge of local extinction in areas of England which it has inhabited since the ice age.

The public costs of the badger cull are estimated to exceed £60m by the end of 2019, yet the government has provided no evidence to prove this cruel slaughter is having any significant impact on lowering bovine TB.

In short, the UK government is willing to risk the extinction of badgers in parts of England in order to forge ahead with its bogus cull. And Australia is willing to kill thousands of wild animals, rather than finding a non-lethal way to deal with them, in the face of a virtual genocide of wildlife in the country. Such is the state of human thinking right now when it comes to the natural world.

To be clear, there are circumstances under which culling may be the only possible option. But, particularly as the need to remove animals is almost always a consequence of human actions, the responsibility lies with us to exhaust every other option first. Currently, it’s a commonplace first resort in most cases.

Riffing on an earlier idea raised by the German philosopher Georg Wilhelm Hegel, one quote writer Aldous Huxley is famous for reads:

That men do not learn very much from the lessons of history is the most important of all the lessons history has to teach.

That notion very much pertains to our relationship with the natural world now. Ever since early humans realised they could subjugate other animals, they have done so. The same can be said about the whole living world. We have utilised the planet and its creatures for our own ends, with little regard for the needs and well-being of the ‘object’ in question. The life we couldn’t use, or that posed a threat to our lives or way of life, we often destroyed. That pattern hasn’t changed much since then, as these culls illustrate.

Indeed, part of the argument for camel culling in Australia goes as follows: they aren’t native and they’re a ‘pest’ so we should kill them. As previously mentioned, humans brought camels to Australia at a time in history when they were useful. Now that they’re less handy to humans, the species that has ‘dominion’ over the world, people consider their lives less valuable than native wildlife – regardless of the fact they’ve now lived in Australia since the 19th century.

As an experiment, let’s apply that argument to modern humans in history. Under that logic, none of our lives are of value unless we live in Africa, where homo sapiens originated. But we don’t use that argument for ourselves, because of the hierarchy of value we’ve imposed on the living world.

Furthermore, most pay little attention to the injustice and irresponsibility involved in treating the world like our personal playground. The white settlers in Australian were, of course, initially British. So the UK bears a historic responsibility for the presence of camels in APY Lands. But it is the indigenous community that’s largely left to deal with the situation. Such is the hierarchy we also place on value in the human world.

Humanity has made some progress in recognising the value of life aside from our own. Efforts to raise awareness of animal rights have been ongoing since the 18th century. Meanwhile, indigenous populations around the world have often maintained a relationship with the natural world based on mutuality and respect throughout history.

But the general progress of mankind has been at the expense of our fellow earthly travellers, and, indeed, the Earth itself. Now, we can clearly see where that’s got us: ecological and climate collapse. This is what history has taught us. That if we subjugate the living world entirely for our own ends, with no consideration for the well-being of it or even how our use of it might affect our own future, things will not end well for us.

As already noted, people don’t only cull other animals to benefit human populations. Often the justification for culling relates to the protection of native flora and fauna, as is partly the case with the Australian camels.

However, whether culling is in service of humans or other native animals, it feeds the pattern already discussing here: that we are within our rights to kill the life we deem not useful. That we are the architects of this world and get to decide what life has value. That we know best.

That pattern has led us to where we are today: ecological chaos. But will we learn from that ‘lesson of history’?

Learning from our mistakes

The climate crisis we’ve created has brought the importance of the natural world home to many people – especially as millions of their children are forcing the issue into the public consciousness by striking from school. Thankfully, some people have started to explore what leaning towards the less destructive side of our humanity can look like.

Renewable energy is now widely available. Ideas abound for the rewilding of our world. We now have at least the potential to move towards feeding much of the world through lab-grown foods and pesticide-free crops so we can end the cruel, planet-destroying agricultural system we’ve created. There are other things we can do, and further ideas will naturally arise as we move forward.

None of these initiatives represent a silver bullet. Neither are many of them easy or quick. Tackling the mess we’ve created is not going to be simple.

But, what’s clear is that the single biggest impediment to action is ourselves. Because, to find the answers to the climate catastrophe, humankind needs to fundamentally change its relationship with the natural world.

The whole ‘survival of the fittest’ and ‘man’s dominion’ way of thinking isn’t going to help us tackle the climate crisis – understanding that we are a part of a vital system in which all life is intertwined and deserving is. With the strength of will, we can choose to get there. What sets humans aside from most other animals is our big brains, after all.