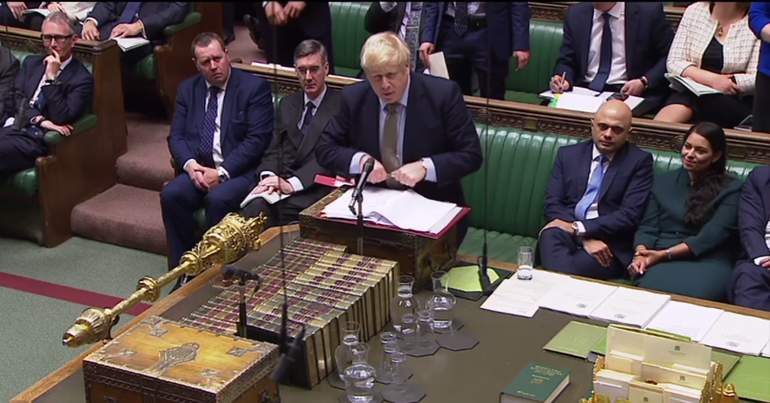 Boris Johnson’s cosy relationship with US President Donald Trump is nothing new. After Theresa May’s resignation, Trump was quick to endorse Johnson as her replacement. He even described him as “Britain Trump”. Ever since becoming prime minister, Johnson has returned the favour by further aligning Britain with the US administration. Shortly after his election victory in December 2019, the two announced that they had discussed an “ambitious free trade agreement” in a phone call.

Johnson’s affinity for US neo-conservativism is, likewise, hardly breaking news. As a ‘journalist’ for right-wing publications such as the Spectator, he was a regular cheerleader for various US foreign interventions. And as a backbench MP in 2003, he voted in favour of the disastrous Iraq War, which led to the deaths of thousands of US and UK troops and hundreds of thousands of Iraqi civilians.

Now, Johnson’s position as an outright puppet of the Trump administration has been laid bare for all to see. At the latest Prime Minister’s Questions (PMQs), he demolished any lingering doubt that his government will only further cement Britain’s status as a proxy force of US imperialism.

On 8 January, Iran launched airstrikes against various US military bases in Iraq in retaliation for the assassination of major general of the Islamic Revolutionary Guard, Qassem Soleimani. The following day, Johnson faced questions from Labour leader Jeremy Corbyn about the escalation of tensions between the US and Iran.  And his answers were revealing on several levels.

First, Corbyn asked Johnson whether he opposes any further retaliation and violence between the US and Iran, pointing out the potential risk of the situation escalating into full-scale war. Tellingly, Johnson failed to answer the question. Instead, he engaged in some evasive and self-congratulatory prattle about his government’s handling of the crisis and partnership with “European allies”. Into this drivel, he slyly inserted two boilerplate neoconservative propaganda points. Firstly, that Soleimani was a ‘bad guy’, and secondly that opponents of US imperialism and lawlessness like Corbyn don’t share this view of him. He said:

we drew particular attention to the baleful role played in the region for a very long time by Qassem Soleimani. And that was a collective European view, but a view that doesn’t yet appear to be shared by [Corbyn].

As The Canary has previously argued, Soleimani was certainly no saint. But that’s not the point. Because there are several subtle but insidious rhetorical tricks that Johnson is using here. First, he seems to be suggesting that the US government is justified in assassinating the leader of foreign military force.

Secondly, he’s implying that those who question anything about the assassination must only be doing so because they secretly agree with these ‘bad things’ that Soleimani is alleged to have done. In doing so, he both unfairly smears those who question his position and also conveniently and duplicitously sidesteps the complex legal, ethical, and political questions surrounding how states can behave on the world stage. The reality, of course, is that Soleimani’s assassination was a completely unjustified political murder that flies in the face of international law.

After stumbling with a dud question about UK troops in the region, Corbyn then got to the crux of the issue by asking whether Johnson has any evidence that the assassination wasn’t illegal under international law. Revealing just how little backbone he has when it comes to standing up to the US trampling over international law, Johnson responded that “clearly the strict issue of legality is not for the UK to determine since it was not our operation”. In other words, he thinks that the UK government shouldn’t speak out or hold the US to any standard of international law whatsoever.

Next, he employed another classic neoconservative talking-point about how the assassination was somehow a legitimate act of self-defence. He said:

But I think that most reasonable people would accept that the United States has a right to protect its bases and its personnel.

Here he is subtly inserting another assumption without explicitly spelling it out: that the US has a right to have bases and personnel in the Middle East in the first place. The reason he isn’t spelling it out is, of course, because on close examination it is completely false. As US Green Party presidential candidate Jill Stein has pointed out, the US has surrounded Iran with military bases on all sides:

Netanyahu said Iran wants to take over the world, but forgot to share this critical piece of evidence: pic.twitter.com/wiysC2TmhH

Obviously, the US would not accept Iran placing military bases in areas of Canada and Mexico right next to its border. And so clearly, suggestions by Washington that Iran is the primary aggressor in this situation are nothing short of laughable.

Johnson then reverted back to the ‘he was a bad guy’ line of argument by elaborating on the purported evils that he has committed. These accusations included Soleimani’s alleged involvement in arming of Houthi rebels and Hezbollah for use on civilian targets, “sustaining the Assad regime in Syria”, and “supplying improvised explosive devices to terrorists who [have], I’m afraid, killed and maimed British troops”. For good measure, he finished by stating: “That man had the blood of British troops on his hands”.

Johnson appeared to be shamelessly playing to the emotions of the public. It is exactly the kind of jingoistic and sentimental drivel that gutter tabloids like the Sun and Mail seize on then propagandise for him and other right-wing politicians. In terms of his accusations against Iran, there is also a huge element of hypocrisy. After all, both the UK government and the US government have been extensively involved in arming some of the region’s worst human rights violators.

This includes the brutal Saudi dictatorship, which is waging a devastating war in Yemen that has included multiple acts of state terror – including bombing a school bus full of children. The Israeli government, which is the largest cumulative recipient of US military aid since World War II, is occupying the West Bank, Gaza, East Jerusalem and the Golan Heights in violation of international law. Moreover, Israel’s military forces routinely commit massacres of the defenceless civilian populations of these areas, which has even involved killing children.

As the exchange went on, Corbyn issued a damning indictment of Johnson’s shameless bootlicking. He said:

The United States’ actions have undoubtedly escalated the risk of a dangerous conflict in an already destabilised region, putting civilians, UK troops, and nationals at risk, and leaving the Iran nuclear deal in danger of being dead in the water. This government’s response is not putting the interests of this country first, but instead seems more interested in prioritising the prime minister’s relationship with President Trump over the security of the region and of this country.

Isn’t the truth… that this prime minister is unable to stand up to president Trump because he’s hitched his wagon to a trade deal with the United States, and that prioritises everything else that he ought to be considering?

What makes this kowtowing to US interests all the more depressing is that Brexit campaign figures like Johnson complain that Britain has somehow become a “vassal state” of Brussels due to its EU membership. But the reality is that when it comes to foreign policy, successive Conservative-led governments far more resemble a vassal state of Washington than of Brussels.

Sadly, much of the British electorate has been duped twice over by a man who will further diminish British independence by further subsuming its state into serving as little more than a proxy of US military and economic might.

Dangerous days lie ahead, and the need for independent media to call out Johnson’s dishonest and hypocritical propaganda will only grow.