There's one clear winner in Trump's war with Iran - Canary 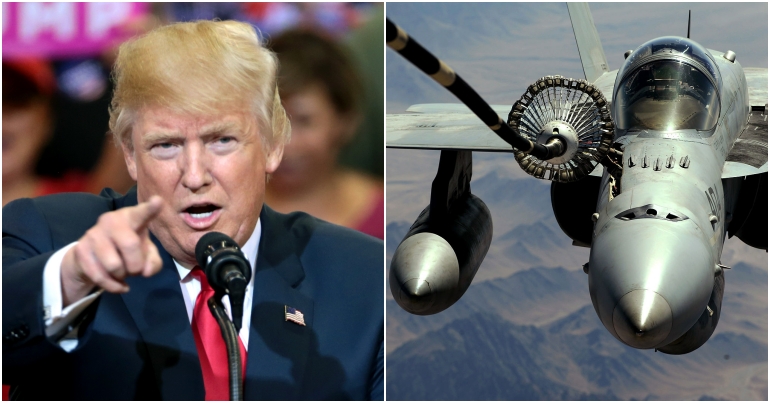 With depressing familiarity, the US is once more pushing us to the brink of war in the Middle East. But there’s one clear winner from the conflict – the arms trade.

This is important. Not just because of the gross immorality of a trade that profits from war, death, and destruction. But because it is this vile business that should be at the top of our list if we want to protest the conflict.

Learning from the past

Anyone who remembers the protests against the Iraq war in 2003 will remember the futility of those marches. One million people marched in Central London and Tony Blair carried on regardless. And if everyone was ignored by Blair, it doesn’t take much imagination to realise the impact waving a placard in Whitehall will have on Boris Johnson.

Meanwhile, Stop the War, dominated at a national level by the Socialist Workers Party, repeatedly funnelled people into more pointless parading. At the same time, it ignored, and at times undermined, those of us trying to stop the war by actually, you know, trying to stop the war – through going to military bases and targeting arms dealers.

Coming together for large marches can be a really positive experience. I’m not saying they shouldn’t happen or that we shouldn’t go to them. But if the extent of our resistance is still being shepherded around London, then the impact we can have on any conflict is going to be limited, if not non-existent.

Governments and corporations love money. Following this money is one of the most effective protest strategies we have, especially as part of a sustained campaign. But even if an arms manufacturer is shut down for one day, it costs them money and it has an impact.

However, targeted campaigns are where we can make a real difference. And if we want to take action against the arms trade, it’s important to look at the history of other campaigns. For example, the Stop Huntingdon Life Sciences (SHAC) campaign was described by Corporate Watch as:

perhaps the most ambitious and most effective anticorporate campaign against vivisection in the world. Its aim [was] to close Huntingdon Life Sciences (HLS), Europe’s largest animal testing laboratory.

In fact, SHAC was so successful that HLS only survived because it was bailed out by the government and the Bank of England. This success was achieved through:

aim[ing] to persuade companies to desist from investing in, supplying or providing services to HLS. This tactic recognises that corporations cannot do business in a vacuum but rely on other companies to provide a network of services to them.

Unsurprisingly, this level of effectiveness was met with extreme state repression and organisers were given long prison sentences for conspiracy to blackmail.

But we can learn much from this case and shouldn’t ignore the success of the campaign. We can transfer what was successful to issues such as tackling the arms trade. With Johnson’s majority, there’s little hope that parliamentary politics will change anything. It’s therefore down to us to take effective action.

Protest can, and does, work against the arms trade. Actions taken against the world’s largest arms fair in London have continually disrupted it and could, with enough numbers, shut it down. Meanwhile, in Cardiff, anti-arms trade campaigners successfully forced the Defence, Procurement, Research, Technology and Exportability (DPRTE) out of their city. In fact, DPRTE was also forced out of Bristol and Birmingham and is now attempting to hide in Farnborough. And in Australia, campaigners have successfully shut down arms fairs.

The arms trade only thrives because it’s profitable. In 2015, Bruce Tanner, the executive vice president of Lockheed Martin, was caught gloating about the “indirect benefits” of the conflict in Syria, largely in relation to Turkey shooting down a Russian plane, stating this “makes Syria an incredibly dangerous place to fly”.

If we want to have an impact on Trump’s war with Iran, or any other conflict, then marching is great. But once you’ve finished marching, find out about the arms trade and take action. Hit the profits these dealers make and show them that we, the UK public, are not going to sit by while they make billions from death and destruction.