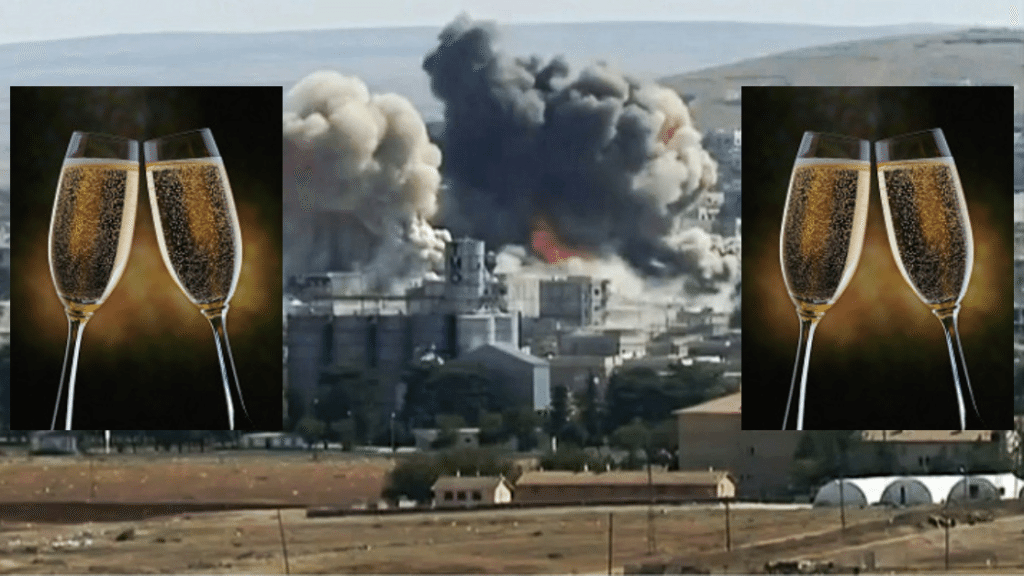 Arms dealers have been caught gloating about the “benefits” they are getting from war in the Middle East during a Credit Suisse industrial conference. Speaking at the conference, Bruce Tanner, the Executive Vice President of Lockheed Martin, the world’s largest arms company, spoke of the “indirect benefits” of the conflict in Syria, largely in relation to Turkey shooting down a Russian plane, stating this “makes Syria an incredibly dangerous place to fly”.

Tanner celebrated this escalation in conflict saying it meant more sales of their F22 aircraft. He described Lockheed Martin’s increase in profits as:

an intangible lift because of the dynamics of that environment and our products in theatre.

An extract of his speech can be heard here:

It’s no wonder he’s in high spirits – this week Lockheed Martin announced a $318 million (£212 million) contract to supply their Hellfire missiles to a whole host of countries, including the US, South Korea, Egypt, Pakistan, Iraq, India, Tunisa, Indonesia and Saudi Arabia.

In 2010, Hellfire missiles killed 128 people, including 13 children when they were used to supposedly target one jihadist. The UK government have admitted to paying compensation to a family in Babaji where, in 2009, 8 people – including 4 members of the same family – were killed in a mistaken attack by Hellfire missiles. Speaking to Channel 4 in 2009, Sufi Abdullah described what happened:

Suddenly I heard the sound of a blast. When I turned I saw that my son and brother were lying on the ground, unconscious and covered in blood.

However, Tanner was not alone in unashamedly boasting about the profits from death and destruction. According to The Intercept, Tom Kennedy, Chief Executive of another global arms giant, Raytheon, spoke of a “significant uptake” in sales to the Middle East. Referring to a meeting they had with Saudi Arabia – described in a previous Canary article as ‘ISIS with an embassy’ – he said:

Another arms dealer, Wilson Jones, president of Oshkosh, commented about how more countries wanted to buy their armoured vehicles “with the ISIS threat growing”.

Unfortunately, they are not the only arms companies celebrating an increase in profits. War is good for business, and arms companies have been seeing a steady rise in their profits since both the Paris attacks and the UK’s decision to bomb Syria.

Arms dealers have shown time and again that they are happy making money from the suffering of others. A report last year from the company Chemring, who supplied tear gas which has been used in Hong Kong and Egypt, described on page 7 how they were:

well-positioned to benefit from any sustained increase in demand as a result of the conflict in the Middle East. Furthermore, although there has been a slowdown in the West’s military spending, it is important not to forget that in both Asia and the Middle East there are signs that military spending is on the increase and Chemring will be looking to take advantage of this trend wherever possible.

Most of us are appalled when we see war and destruction, but to the arms companies it represents a business opportunity. Conflict and military intervention fuel arms sales, and line the pockets of arms dealing executives. These companies don’t care who uses their weapons or what they use them for, the only thing they care about is profit.

Not only do the arms industry literally make a killing out of war, they relish in the profits they make at the expense of the misery of others. These speeches and reports show just how far they are prepared to go in fueling, and benefitting from, conflict. They must be opposed if we want to take action against the bombing of Syria.