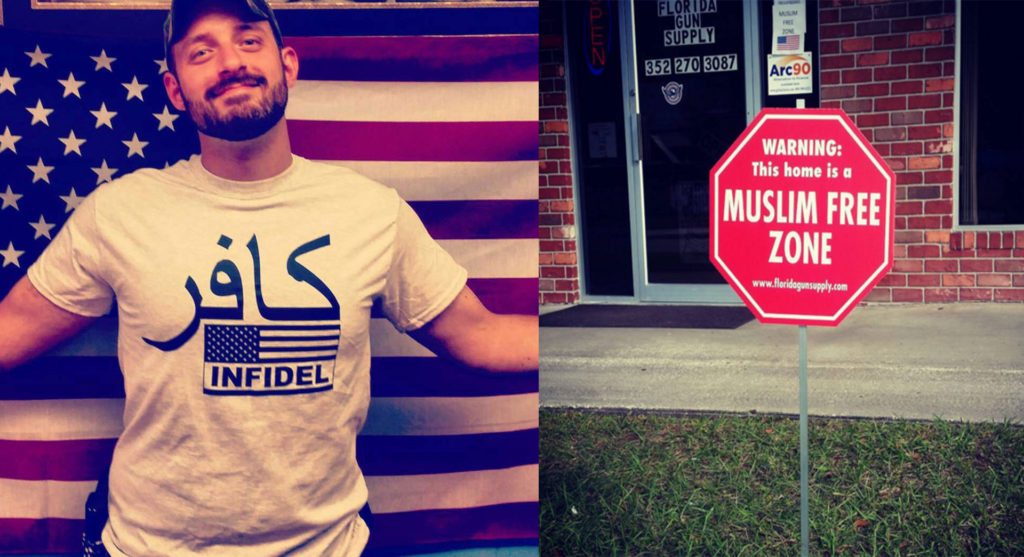 Signs and bumper stickers branded with anti-Muslim messages are being flogged online by a Florida gun store that declared itself a ‘Muslim-free zone’.

Under the description ‘Keep Your Home Safe with a Muslim Free Zone Yard Sign!’, a ‘Muslim Free Zone’ sign is listed for $19.55, while for as little as $4.88, shoppers can buy a bumper sticker adorned with MFZ in block capitals.

The gun store, whose owner Andy Hallinan declared the premises a ‘Muslim-free zone’ in July following a spate of alleged shootings by a Muslim man in Tennessee, also offers targets depicting the prophet Mohammed holding a machine gun and T-shirts featuring the slogan ‘Infidel’ below the US flag.

Last month, a federal judge threw out a civil suit filed against Florida Gun Supply, exonerating the store of discrimination on the basis of religion.

The case was brought in July by the Florida chapter of the Council on American-Islamic Relations (CAIR), who accused the store of violating the Civil Rights Act for banning Muslims from the premises.

However, US District Judge Beth Bloom dismissed the case on the grounds that nobody from the organisation had service denied from the store.

Justifying her decision, the federal judge wrote: “There are simply no facts grounding the assertion that Plaintiff and/or one of its constituents will be harmed.”

It is believed that store owner Hallinan banned Muslims from his premises following the alleged shooting of four marines and a navy sailor by Muhammad Youseff Abdulazeez.

The controversial merchandise came to the attention of The Canary after a picture of the sign was tweeted by the English Defence Leauge, a far-right protest group, alongside the message ‘this is how they do it in America’.

According to the latest FBI crime figures, anti-Muslim hate crimes rose 14 percent across America in 2014, while the total number of hate crimes dipped nearly 8 percent.

In the wake of Donald Trump’s latest Islamophobic outburst, anti-Muslim prejudice is rearing its head with gusto, with daily reports of disproportionate terrorist scares and acts of religious hatred becoming common place. But while it would be nice to think this intolerance exists solely on the fringes of society, anti-Muslim sentiment has been normalised across the western world – an inescapable symptom of the War on Terror. Case in point: a poll in June found that 38% or Americans would not vote for a Muslim president, while in Britain, a 2013 poll found that 44% of Britons do not believe Muslims share our values.

These prejudices – along with the more extreme views of the EDL and Florida Gun Supply – are morally repugnant, but while it could be easy to laugh them off as the opinions of a bunch of fringe extremists, these views are becoming increasingly mainstream and endemic – and they should be exposed and challenged by all of us.