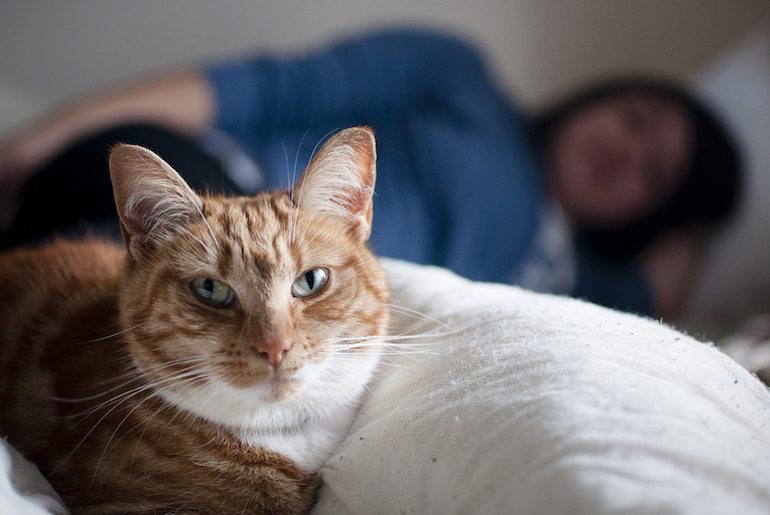 If you’re having trouble getting to sleep, you might want to try sharing your bed with a furry friend. Your pet, that is.

Sleep experts asked pet owners how sharing the bed with their four-legged friends affected their sleep. It turns out that for the majority of people, sleeping with a pet is actually beneficial.

In 2012, the American Veterinary Medical Association reported that dogs are the most popular pets in the US, with 36.5% of households owning a dog. Cats came a close second, at 30.4%. And since as many as 70% of pet owners let their pets share their beds, it’s good to know what effect – if any – they can have on sleep.

In the new study, scientists from the Mayo Clinic in the US collected information from 74 pet owning patients about whether they sleep with a pet. Around half of them (56%) said they did, and most weren’t disturbed by the occasional purring or pawing. In fact, 41% of the people who slept with a pet considered their furry friend’s presence to be beneficial.

The authors of the study explained:

Because humans spend considerable time sleeping, a pet owner’s desire to have animals close at night is understandable.

They also noted it can be a challenge to figure out where everyone sleeps:

As more households include multiple pets, the challenge of securing appropriate sleeping arrangements is increased.

This poses a problem. Although sleeping with a pet might bring some benefits, the new study isn’t definitive. Previous research has shown that sharing a bed with your pet is bad for your sleep. In the study, 148 pet owners explained the effect their pets had on their sleep, with 30% reporting being woken up during the night.

And according to another study, snuggling up could actually be putting us at risk of our pets’ diseases. From cats sharing the plague to dogs spreading Chagas disease, the risks involved in sharing a bed with a pet could be more serious than the occasional kick.

Either way, it’s clear that Fido and Felix can affect our sleep. It might be a good idea for doctors to enquire about insomnia patients’ sleeping arrangements, even if there’s not quite enough evidence to prescribe kitty cuddles.