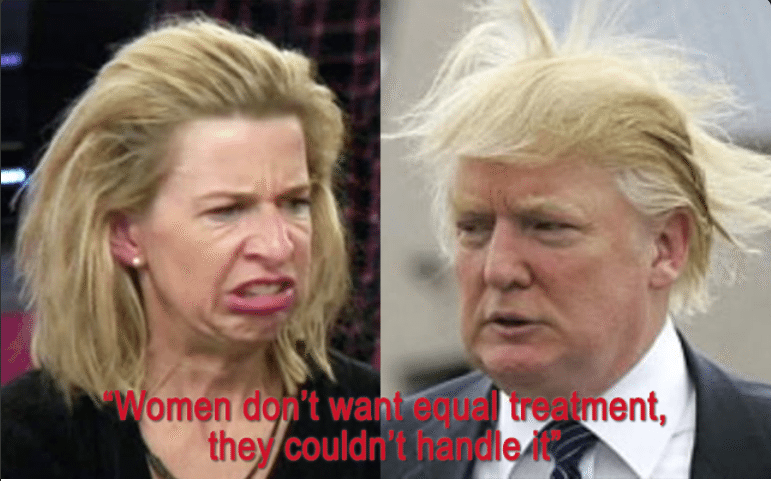 In scenes almost beyond parody, the biggest bigots either side of the Atlantic have found each other on Twitter – and are busily professing their love.

So, it started with Trump making some pretty outlandish claims about Britain’s alleged ‘Muslim problem’ – using literally the same language as was prevalent in 1930s Germany.

The United Kingdom is trying hard to disguise their massive Muslim problem. Everybody is wise to what is happening, very sad! Be honest.

What was the source for Trump’s view on the role of the Muslim faith in British society? Yes, you already guessed.

Thank you to respected columnist Katie Hopkins of Daily https://t.co/LgtY0qdv9U for her powerful writing on the U.K.'s Muslim problems.

The politicians of the U.K. should watch Katie Hopkins of Daily https://t.co/LgtY0qdv9U on @FoxNews. Many people in the U.K. agree with me!

Meanwhile, somewhere in Middle England, Katie Hopkins was enjoying a glassful of children’s tears when she came across the tweet and nearly hyperventilated with delight.

@realDonaldTrump thank you sir – #standstrong you have support in the UK. The liberal left love a petition! pic.twitter.com/TZnUy2a1N6

And then the whole thing simply devolved into some sort of bizarre bigot circle jerk.

It's because Trump & I articulate sentiments repressed by the politically correct consensus that we have a voice.https://t.co/jBEJETjBZt

But of course, this being Twitter, their love affair was noted and duly mocked. Former England footballer Stan Collymore kicked things off nicely.

And then came open season.

Then of course, came the parody responses. Like this from Dan Barker.

On balance, it’s fair to say that the courtship of Trump and Hopkins has been received with approximately the same exuberance as one might expect upon hearing that Skeletor was going to marry the Wicked Witch.

But, as hard as we laugh – there is of course a serious point to be made here.

The pair see themselves as valiant freedom fighters against political correctness, when in fact they are the oldest brand of bigot known to the world.

All the likes of Hopkins and Trump are defending, is the right to use their platform to offend an already persecuted minority, from the safety of their privileged surroundings. They are trying to protect their Right to Offend. A right that has been the privilege of the few for a very long time and remains firmly in place, or these two simply would not exist in the public space.

In fact, both exhibit an unsurprisingly hypocritical intolerance for Freedom of Speech if it is exercised by anyone other than themselves. Trump recently called on Bill Gates to ‘close’ the internet, saying that free speech was something only ‘foolish people’ wanted. Meanwhile, he hides behind the Freedom of Speech defense when calling for muslims to be banned from entering the United States (even US citizens who were currently on holiday). Hopkins has made similar pronouncements.

The real exercise in Freedom of Speech here, is the communities targeted (and their supporters) being able to say, to the likes of Trump/Hopkins, that they will not put up with being offended, and certainly not tolerate being asked to muzzle their own dissenting voices to give their accusers a quiet life.

To put it plainly, these two deserve each other. Now, let’s move on.