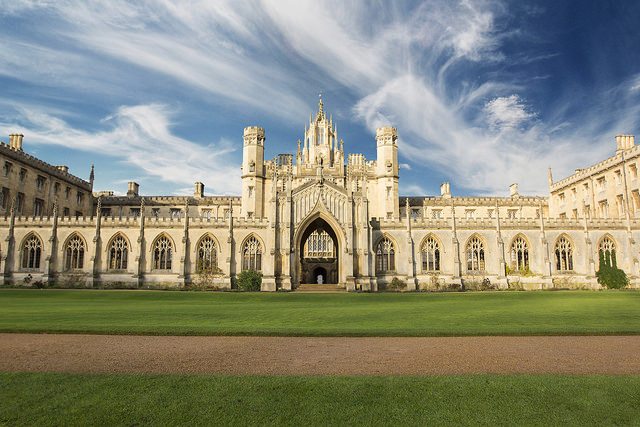 A drinking society at St John’s College, Cambridge University, has been accused of racist, classist, and misogynistic behaviour that causes “women and other minorities to feel unsafe” and promotes rape culture.

Other sickening statements made by its members at one of their events, reported by The Tab, include:

Stand up if your favourite type of girl is asleep.

Stand up if you’ve ever racially abused someone because they wouldn’t get with you.

Stand up if you hate the poor.

Stand up if you could buy this entire restaurant with your ring.

One female student who went out with the group described them as “really intimidating”. Another stated:

They didn’t even ask our names, they looked at us like they thought we were shit. They had no civilised conversation. It was literally like a contrived thing where they aimed to go and be misogynistic, vile and take advantage.

Although the university have claimed they are taking the matter “very seriously” and that the incidents only involved a “small handful of people”, evidence has been emerging over the last year from Oxford and Cambridge universities of widespread similar actions and “persistent rape culture” across many universities.

Writing in The Guardian, Jinan Younis claimed after returning home after her first term at university, “almost all” of her friends described how they had been “sexually violated”. Describing her time at Cambridge, she wrote:

Most of all, it’s a culture that belittles a woman’s right to say no. Joking about rape is a core part of the laddish environment that I have witnessed at university. At one student party, a boy was asked about the “rapiest” thing he had done. He said that he had made sure a girl was heavily drunk before attempting to kiss her, to which another boy replied “that’s a pretty standard pulling technique for most guys.”

Shocking figures released from a survey undertaken at Cambridge University last year showed that 1 in 13 students had been subject to attempted or actual serious sexual assaults. 88% of these assaults went unreported. An additional 43% said they had been groped, and 55% had been made to feel uncomfortable from sexual comments.

One woman, who didn’t report the sexual assault she suffered because of a “strong fear” she “wouldn’t be believed” said:

There is a privileged lad culture in Cambridge that doesn’t take sexual harassment and sexual assault seriously. They can make jokes because it’s not something they’re directly affected by; they don’t think sexual violence has anything to do with them or their friends.

Meanwhile, earlier in the year the head of Somerville College at Oxford University warned of an “unprecedented” level of “excessively harassing and intimidating behaviour”. In an email to undergraduates, Dr Alice Prochaska further wrote:

Rape is not a joke, as those who have been victims of it could tell you. Any level of sexual harassment is also not a joke; it is not acceptable that members of the college and their friends should be made to feel uncomfortable and disrespected here.

However, even when these threats are reported they are not taken seriously by the courts. In a case last month, Jack Fitzsimons was given a conditional discharge – pretty much the lowest punishment the judge could hand out for any offence – after threatening a 19-year-old student by telling her: “I want to take you home and abuse you and rape you”. During sentencing at Oxford Crown Court, Fitzsimons claimed his comments were a joke.

In handing down such a disgustingly insignificant sentence, judge Ian Pringle said:

You are a talented young man and I am going to pass a sentence that I feel won’t damage you over a long period.

Unfortunately, his comments are not surprising. It is likely the judge is part of the elite who have perpetuated this culture for years. Figures released last year investigating elitism in the UK found 75% of senior judges went to Oxbridge. Furthermore, 24% of all MPs attended the universities with 59% of the cabinet being alumni.

There has been much publicity about the actions of the infamous Bullingdon club whose previous members include David Cameron, George Osborne, and Boris Johnson. Whilst the Bullingdon is widely known for appalling levels of debauchery and destruction, accounts of their view of women are truly abhorrent. One former member described treating women like “fillies”:

Women aren’t allowed to formal dinners but at informal gatherings we would make them get down on all fours like a horse, whinny, and bring out hunting horns and whips.

Unless something drastically changes this abhorrent behaviour will be repeated by each generation of elite students, the very people that are set to become the next rulers. We need a dramatic change. In the short term, we need to wipe out rape culture, and eradicate sexual assaults. We need to support victims and properly punish offenders. However, in the long term there is a huge need to reverse elitist Britain, and to create a democracy representative of the majority of people who live here.