Here's the conversation the mainstream media is refusing to have about the war in Syria (TWEETS, VIDEO) - Canary 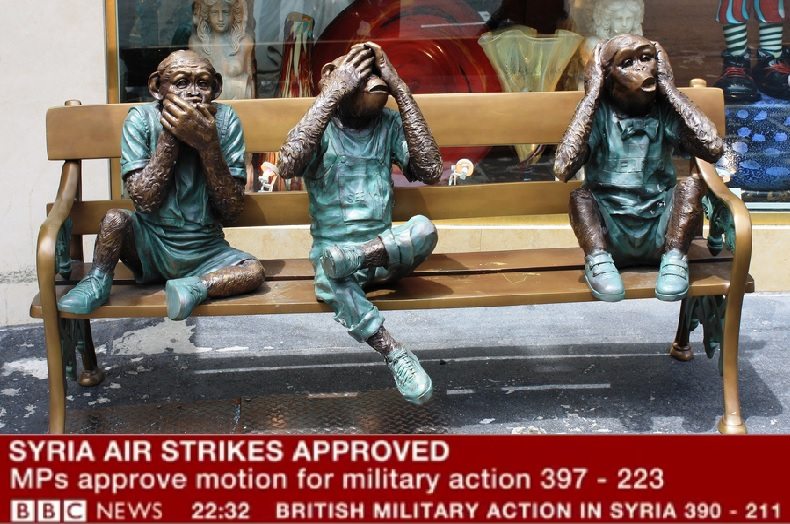 On 2 December, the UK parliament voted in favour of military action in Syria by 397-223, despite the fact that Cameron lacked the support of his own Foreign Affairs Committee and less than half of the public. Which begs the question, with so much opposition, why did the strikes go ahead?

A recent report from the Media Reform Coalition may provide some answers. The report is titled ‘Who owns the UK media?’ and the results are startling. According to the findings,

Just two companies, Rupert Murdoch’s News Corp UK and Lord Rothermere’s Daily Mail Group, control nearly 60% of national newspaper circulation. If you include online and mobile readers, the situation isn’t that much better with five companies accounting for 80% of all consumption, online and offline.

As the report notes, having so much narrative power in the hands of so few:

…creates conditions in which wealthy individuals and organisations can amass huge political and economic power and distort the media landscape to suit their interests and personal views.

Traditionally, the function of news is to inform the public, and hold the powerful to account. That is its merit, and is desperately needed now. As investigative journalist Nafeez Ahmed states:

In the aftermath of the Paris attacks, as governments push forward with new legislation on mass surveillance and anti-terror powers, as the drumbeat for more war in Syria intensifies, the need for journalism that operates in the public interest cannot be underestimated.

But in the lead-up to the Syria vote, did this concentrated UK press work in the public interest?

A drum, a drum, the war must come

As the Syria decision approached, some media outlets seized upon the opportunity to demonise Muslims. The Sun newspaper, for example, ran the now infamous headline, “1 in 5 Brit muslims’ sympathy for jihadis”. A story roundly debunked, but for which the Sun is yet to apologise or correct – despite it’s sister paper The Times admitting the story was bogus.

But what the media doesn’t say, is just as important as what it does.

For instance, David Cameron insisted he simply had to bomb Syria, because numerous foiled attacks planned for British soil were directed from there. Few media outlets, if any, pressed him for details of these plots to confirm the authenticity of his claims. In reality, none of the foiled attacks were planned in Syria, as Alex Salmond – not the media – revealed after the vote had taken place.

Not so unique after all

Cameron also asserted that the UK is needed in Syria because the RAF’s Brimstone missiles have ‘dynamic targeting’. This was commonly regurgitated in the media before the strikes, without query. As the BBC noted here,

The PM argues that the particular capabilities of the RAF provide something that others don’t have. That, he says, is one of the reasons why Washington and Paris want the UK engaged.

It is that precision strike that our allies really wanted us to bring to the campaign.

This is false. Saudi Arabia also has this ‘precision’ technology and is already in the ‘campaign’. Additionally, the US recently rejected the opportunity to purchase these exact missiles, opting instead for a further contract for hellfire missiles with Lockheed Martin – presumably, they think the targeting is better.

Politicians have generally indicated the strikes are legal, which has rarely been probed by the media. However, the legality of UK airstrikes is in serious doubt because we do not have authorisation from the sovereign Syrian government, which is the normal standard for legal engagement. There has been a recent UN resolution on Daesh, detailing what governments can do to combat their threat, but it does not explicitly authorise force. So, what is the legal justification? And why did our news guardians not demand an answer before we headed into another potentially illegal war?

Some have suggested the media industry is itself “hungry for war”:

However, the reason may be more insidious than this. Nafeez Ahmed, in the investigation cited above, explores what he refers to as the “Media-military-industrial-complex”. One example, among many, of the connections between these industries is given here:

Alwyn Lewis, another Walt Disney Company director who simultaneously has been a longtime director at Halliburton, one of the largest transnational oil services firms formerly run by Dick Cheney. A Halliburton subsidiary, Houston-based KBR Inc., received $39.5 billion in Iraq related contracts over the last decade – many of which were no-bid deals.

Walt Disney is the world’s second-largest media company, and so, as Ahmed notes, they “control the bulk of what we read, watch and hear, including online. They define our understanding of the world and even ourselves”.

With such a broad media canvas, they can protect their financial interests.

In the UK particularly, it seems the Syrian question has been forcefully linked to Jeremy Corbyn’s leadership. Since the authorisation of strikes, front pages have been filled with disparaging headlines about Corbyn. As Media Lens point out, this contrasted sharply with the plethora of media praise heaped on Hilary Benn for his oratory in support of strikes. They point out:

On December 3, BBC Radio 4 ran Benn’s entire speech and suggested he might become Labour leader. We can be sure that this would not have happened – no matter how ‘extraordinary’ the speech – if Benn had been arguing against war.

In short, Benn is being praised for saying the ‘right’ things.

Corbyn said the ‘wrong’ things, by arguing against war, and has been brutalised in the media because of it. Mark Steel satirized the lunacy of this situation with just one tweet.

Outrageous that Corbyn goes to a Stop the War dinner – he should go to dinners held by arms dealers and offshore bankers like a proper MP.

Corbyn also has consistently advocated for an informed public and more equal society which, as we have seen, could severely challenge mainstream media’s privileged position. Mark Curtis highlights the strategy:

Britain’s media is on a double-war footing. The first war is against Jeremy Corbyn, and is countering the threat that Corbyn’s more popular policies may gain even wider support. The second war is for Britain’s ongoing right to bomb somewhere whenever elites want. The two agendas came together in Benn’s speech

Accepting coercion of this kind is dangerous, in what we purport to be a democracy. The Media Lens article observes that:

When elite interests determine what is and is not politically possible, we are entering the realm of fascism.

In short, the media elite gave all their weight to ensuring the war went ahead, and not for the public’s sake. It was only challenged by social media, less vested online platforms, and precious few of the political class (Corbyn’s Labour, the SNP, the Green Party and Tory rebels) taking a principled, oppositional and democratic stance. That opposition convinced more than half the population there should be no strikes. This is why the media are going for the jugular, and why such principled opposition is so critical right now.