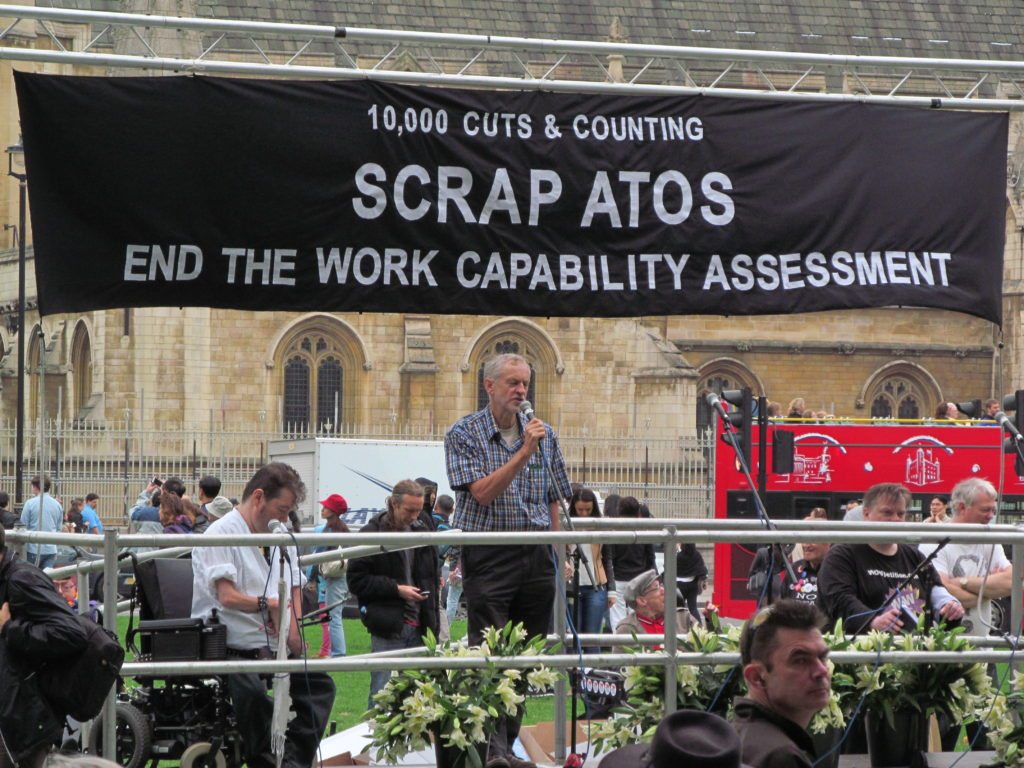 With disability advisers in jobcentres largely a thing of the past, Mind’s policy manager, Tom Pollard, predicted that Universal Credit would see people with mental health issues subjected to a “sausage factory” approach and treated as being “fit to work until proven otherwise”.

Around half of those subject to a Work Capability Assessment (WCA), the tick box test to determine if a person is ‘fit to work’, have a mental health condition. Last month, researchers linked the WCA, or simply the threat of it, to 590 suicides and more than 700,000 antidepressant prescriptions. Psychiatrists have blamed the test for causing relapses in patients with severe mental health problems. Even ‘passing’ a WCA and being declared ‘unfit for work’ doesn’t stop people being hounded. There has been a 668% rise in the last three years in the number of Employment and Support Allowance (ESA) claimants with a mental health condition being sanctioned.

But amid a benefits system that seems to be doing its level best to make mental health problems worse rather than better, we need to ask a simple, though easily overlooked, question – why is British society generating so much mental illness in the first place?

Because, as fast as the Department for Work and Pensions (DWP) can declare people fit for work or sanction them, new claims are made. According to the Organisation for Economic Co-operation and Development (OECD), 40% of new disability benefit claims in Britain are made because of mental health problems, the highest proportion among all 34 member countries. The latest figures indicate that 48% of ESA claims are for ‘behavioural and mental disorders’.

It is a question our political rulers are oblivious to. The Conservatives respond to the mental illness epidemic by mooting forced treatment. The opposition parties espouse a more compassionate approach but settle on superficial ‘talking cures’ such as cognitive behavioural therapy.

Austerity and social security cuts are a production line for the very mental health problems the government claims it wants to reduce. The Centre for Welfare Reform has blamed policies such as the bedroom tax for ‘savaging’ people’s mental health. The group Psychologists Against Austerity has identified ‘austerity ailments’, such as humiliation, insecurity and powerlessness – all experiences that “lead to mental distress”.

Even the staid OECD has concluded that you have to look deeper in order to stem the torrent of mental illness. According to the OECD’s Shruti Singh, “bad line managers and long hours”, as well as “job strain” are all “detrimental to workers’ mental health“.

But far from being alleviated, ‘job strain’ is being intensified. In April 2014, researchers from Cambridge University found that flexible employment practices – not just the familiar zero-hours contracts but also so-called ‘flexi-contracts’ and extreme part-time contracts which don’t provide sufficient hours to make a living – were causing widespread anxiety, stress and ‘depressed mental states’.

These are “all experienced as a form of job insecurity that causes untold stress for thousands of employees and their families,” said the researchers. The government completely misunderstands “the nature and scale of the problem,” they concluded.

We need to vastly expand our horizon of what engenders good mental health and the factors that lead to its opposite. A genuine attempt to reduce mental health problems needs to start by fundamentally de-stressing the workplace, enhancing the condition and stability of housing and removing the ever-present dread of income being snatched away.

Successfully combatting mental ill-health is dependent on creating a less unequal, more socially just and less stressful society. Radical political changes such as worker self-directed enterprises, basic income, and a huge expansion of social housing, need to come to the fore. Coincidentally, these are precisely the political directions we should be going in anyway.

In the 1950s, the famous German psychoanalyst, Erich Fromm, advocated concentrating our energies on creating a ‘sane society’. It is an aspiration that needs reviving.