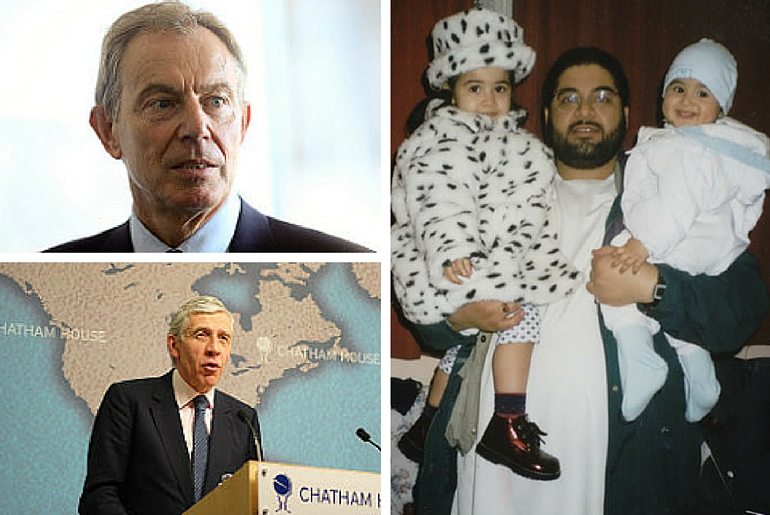 Shaker Aamer, the British resident who was shackled in Guantánamo Bay for 14 years, has decided he won’t sue anyone for his despicable treatment. This is despite the fact he claims Tony Blair and Jack Straw were complicit in his torture, along with an MI5 officer.

According to Reprive, a human rights charity and an organisation that has long campaigned for Mr. Aamer’s release, Aamer is a permanent UK resident who has four British children. While volunteering for a charity in Afghanistan in 2001, Aamer was kidnapped and sold to US forces. After being tortured for a significant length of time, he had no choice but to confess to the crimes the US forces accused him of. The US forces then took him to Guantánamo Bay, from where he was finally released in October 2015, without having a single charge carried out against him. Aamer’s torture at Guantánamo included sleep deprivation and being shackled to the ground in freezing temperatures. He was also threatened that his daughter would be raped. Aamer said:

He told me that your wife and your daughter is with us, and if you don’t start talking, we will rape your daughter and you will hear her crying: ‘Daddy, Daddy’.

That was completely inhumane. It was worse than the beating as well, worse than everything, just thinking of my daughter, you know, and I just sat there, you know, silent completely.

In addition, he claimed his head was slammed against a wall at a US airbase while a British intelligence officer was watching:

Aamer was almost certain that a British intelligence officer was watching:

I have no doubt he is an Englishman, because of the way he spoke, the way he is very careful, the way he was sitting far away, looking at me.

Aamer’s time in Guantánamo Bay raises fundamental questions about what the prime minister of the day, Tony Blair, knew about his treatment. He said that the UK government led by Blair, “know what they were doing”.

This has caused the SNP foreign affairs spokesman, Alex Salmond, to speak out against Blair and Straw:

The not unreasonable allegation that Shaker Aamer makes is that both the [then] prime minister Tony Blair and  Jack Straw must have known not just about his illegal abduction, but also about his torture at the hands of the US authorities

Salmond argued that “as with so many other things” questions remained unanswered and:

They have to be asked the straight question of how could they possibly not have known about the fate that had befallen a British citizen.

An inquiry was set up and led by Sir Peter Gibson in 2010 after it became evident that a number of British officials were aware of the crimes being committed against British citizens and residents in Guantánamo Bay. However, following evidence of M16 complicity and involvement, the inquiry – which was set up to uncover the relationship between British officials and CIA operations – was stopped. This inquiry is now being finished in secret, whether the truth will ever be heard is anyone’s guess.

What we do know is that Straw had allowed British nationals to be taken by the US to Guantánamo. Also, the Gibson report is unambiguous in asserting that MI5 and MI6 co-operated with those responsible for carrying out interrogations and torture, may have known about the practices or, at the very least, harbored strong suspicions about the abuse of those at Guantánamo.

Straw has defended himself, he said:

The British government was never complicit nor condoned torture or other ill-treatment of detainees wherever they were held.

I spent a large part of my time as foreign secretary making strong representations to the US government to get British detainees out of Guantánamo Bay and the US government’s ill-treatment and torture of detainees remains a terrible stain on its record.

Meanwhile, Blair has also denied any claims that he was complicit.

These allegations have led the chairman of the intelligence and security committee, Dominic Grieve, to say that he “very much” hoped that Aamer would be able to give evidence to the committee, along with other detainees.

Aamer believes that for the truth to emerge, there should be a promise that there will be no prosecutions of officials carried out.

While the truth is unknown, the fact the Gibson report unmasked immense controversies and was then halted, to be finished in secret, raises strong suspicions.

Moreover, Straw under Blair’s premiership had enabled US forces to detain British residents and citizens. If this happened without knowledge of what the US forces were doing, it shows a dire incompetence in his role, as he failed to ascertain the extent of their abuse.

After 14 years of despicable treatment, Aamer can enjoy time with his family, but justice is still yet to emerge.