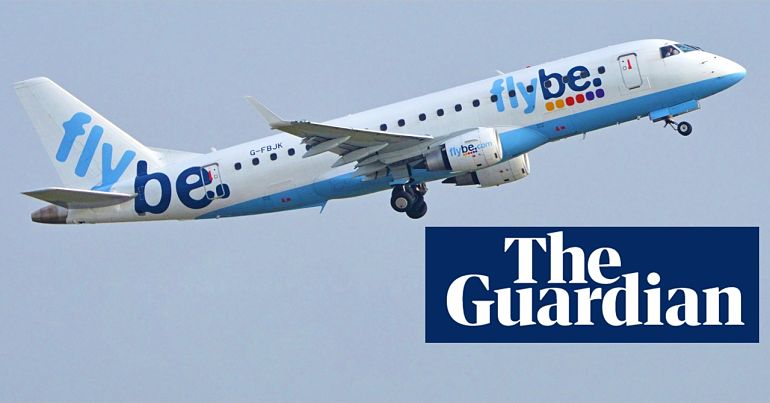 An article in the Guardian on 14 January highlighted the fears some Cornish residents have of being “isolated” if FlyBe collapses. But the article misses two crucial points. Firstly, and most importantly, there’s the fact we’re living in a climate crisis, and no-one should encourage domestic flights. Secondly, the Guardian only managed to talk to airline users to highlight these supposedly generic ‘fears’ – only two of whom are actual residents.

As a Cornish resident, it can be isolating living in Cornwall. But climate burning flights don’t make me feel less isolated. It’s the fact that we have an overpriced public transport system that makes it prohibitively expensive to go anywhere.

Addressing the climate crisis involves addressing our priorities, identifying the problems, and solving them. The Guardian mentions the cost of train travel to and from Cornwall. But it fails to look at solutions that aren’t bemoaning the loss of FlyBe.

Air travel from Cornwall is already subsidised. Train travel isn’t. At present, as a random example, if I wanted to fly to Manchester on 20 January, it would cost me £67.50 (if I only needed hand luggage) and take one hour, 15 mins. The equivalent train journey by train takes six and a half hours, and would cost £192.10. Even taking into account getting to and from the airport, it’s half the time and less than half the price. Obviously it’s a “no-brainer” – as the Guardian summarised one passenger’s comment – if you don’t care about the planet. 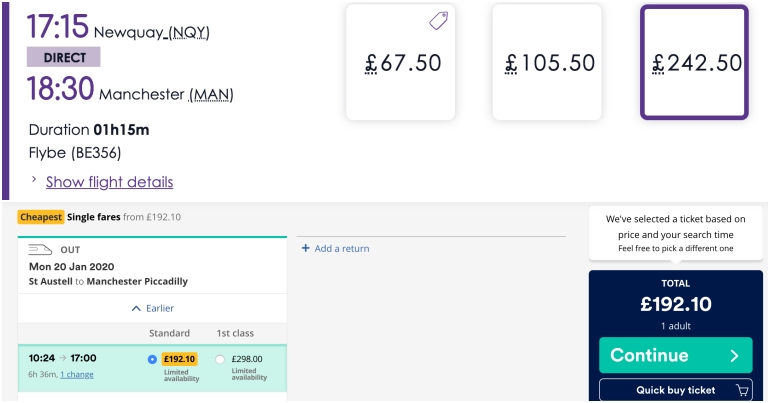 This is the problem Cornish residents face – as do people across the country. But it’s easily solved through better infrastructure and cheaper public transport. And it’s a problem we wouldn’t face if the UK didn’t have some of the highest rail fares in Europe. Yet the government appears eager to give tax breaks to the aviation industry to continue destroying the planet.

The climate crisis is happening now

Australia is burning. Ice sheets in Greenland are melting seven times faster than they were in the 1990s. Meanwhile, as Science Daily reported in 2018:

Arguably, the climate catastrophe is the biggest threat we’ve ever faced. According to NASA:

Even if we stopped emitting greenhouse gases today, global warming would continue to happen for at least several more decades, if not centuries.

But it’s not too late to make a difference. As NASA points out:

the solution will require both a globally-coordinated response (such as international policies and agreements between countries, a push to cleaner forms of energy) and local efforts on the city- and regional-level (for example, public transport upgrades, energy efficiency improvements, sustainable city planning, etc.).

But this isn’t going to happen with our current government and with supposedly environmentally progressive media such as the Guardian pushing the aviation industry.

No-one said it would be easy

Tackling the climate crisis isn’t going to be easy. It involves hard decisions and inconvenience. Ultimately, it will mean changing our lifestyles and admitting that things one traveller in the article described as “vital” are only ‘vital’ if we rank our immediate needs over the future of having a liveable planet.

But whatever the personal decisions we make and should be making, as NASA highlights, a global coordinated response is needed. For this to even start happening, we need a government committed to tackling the crisis rather than bailing out big business. And we need a media that doesn’t use rural communities as an excuse for domestic flights. Unfortunately for us, our children, and the planet, it doesn’t look like this is going to happen anytime soon. In the meantime, it’s down to all of us to make those personal choices, build alternatives and to force governments across the world to take meaningful action before it really is too late.