The MailOnline has generally set a fairly low benchmark for its accuracy and standards of reporting. But it plumbed new depths on Sunday 26 April. Because it quite literally photoshopped a picture of an Olympian to make it look like he had broken coronavirus (Covid-19) social distancing rules.

Feel free not to click any of the MailOnline links. Unless you enjoy funding the right-wing corporate press.

Former Olympic rower and gold medallist James Cracknell has been targeted by the MailOnline. In a sensationalised ‘scoop’ on 26 April which the right-wing rag ran with the headline:

You can say the headline out loud in a shouty, gammon-ish voice if you wish. The MailOnline metaphorically screamed:

James Cracknell appears to have potentially broken lockdown rules after posting and then deleting a picture of him visiting his parents.

In the now deleted Instagram picture, which the double Olympic gold medal winner uploaded on Sunday morning, Cracknell is seen sitting in a garden next to his father.

The 47-year-old posted the picture for his 37,000 followers alongside the caption: ‘Been too long since I caught up with my folks, loved it.’

The problem is, the rag photoshopped the image that it displays on social media shares of the article. 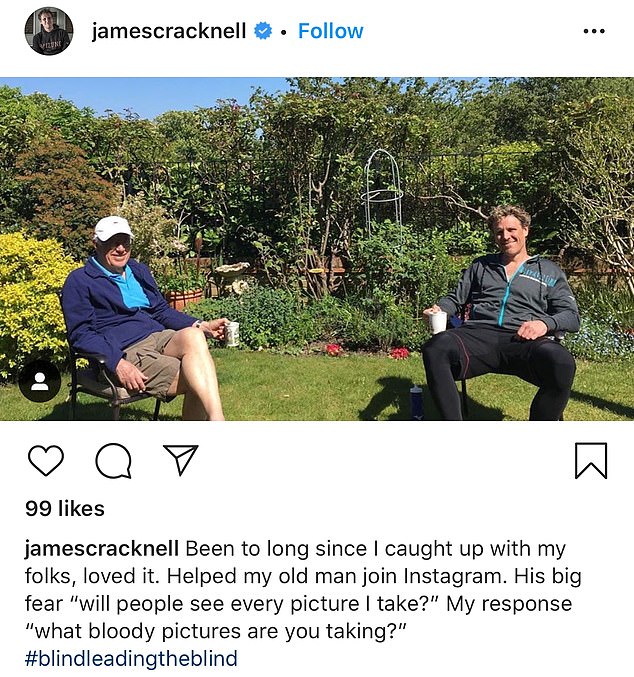 Social distancing rules applied? Check. But the image that people see on social media looks like this: 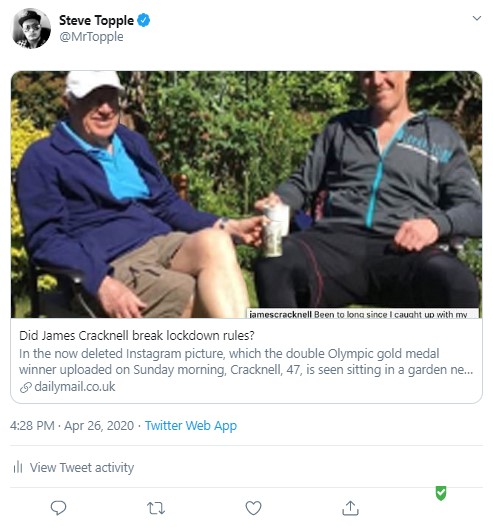 No, really. The MailOnline did just do that. Cracknell wasn’t best impressed. As he tweeted:

Here’s a game of spot the difference. 1) @dailymail ‘s pic of me & my dad 2) the actual picture. Socially distant, no physical contact & was bringing them food. Been a long month of no contact, my mum worked for the NHS her whole career so she was ruthless about distance. Thanks pic.twitter.com/4cWifBGzMa

People leaped to his defence:

This is disgraceful! And just shows how far the Mail will go to lie so something fits their hate-filled conceited narrative.

Others were somewhat sarcastic in their reactions:

Britain's newspapers are struggling to continue in circulation. It costs less than a cup of coffee, so could I please ask everybody to do their bit to help journalism in the UK.

And Ruth Mutton made a fair and balanced point:

Unbelievable! Whatever your opinion on whether he should be there or not, doing this with a photo is unacceptable.

But aside from the obvious false inference (or lie, if you like) from the MailOnline that Cracknell broke social distancing rules, did he break the other government coronavirus guidelines?

The official advice says that, among other things, you should only leave your house for:

one form of exercise a day, for example a run, walk, or cycle – alone or with members of your household.

That is, we shouldn’t be visiting family or friends who don’t live with us. But Cracknell was clearly in a quandary. As he said on Twitter, he was “bringing them food”. Not good enough for the MailOnline, though. It squealed that:

Where relatives are elderly or vulnerable, it is permitted to leave your house to help them, for example by dropping shopping or medication at their door. You can also help them to order online.

But Cracknell could well argue that him sitting several metres apart in his parent’s garden with them is no different, say, to seeing them in a park and standing several metres apart to talk to them. Which is not against the rules. Moreover, government schemes to protect people over the age of 70, for example access to food deliveries, are still not working properly.

My mother, 80, who lives with moderate dementia and only one functioning kidney, has had no communication from the government about being at increased risk. Her friends, all over the age of 70 themselves, have to get shopping from the supermarket for her. This is despite government guidance clearly stating over-70s have to follow strict social distancing, because they are at “moderate risk“.

Whether you agree with what Cracknell did or not, it doesn’t warrant the Mail on Sunday doctoring a photo of him just to drive traffic to what otherwise was an article in the realms of the ‘gossip columns’. Which was actually the thrust of the piece: detailing tittle-tattle about his ex-wife. But that’s the MailOnline all over.