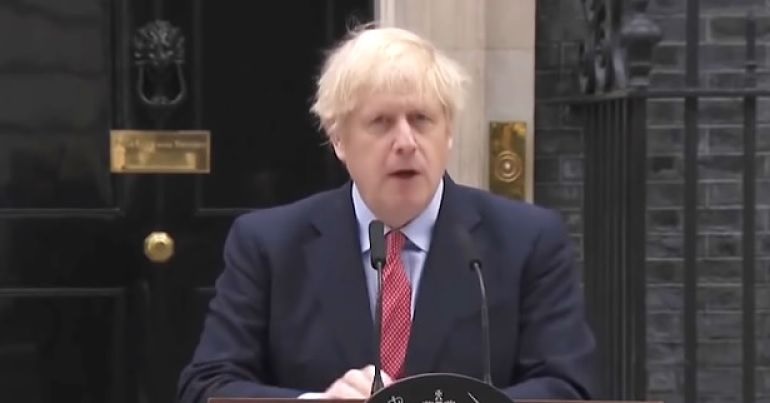 There’s been a sense in the press and among the right wing in England that Boris Johnson’s return to Downing Street would be a good thing. One Conservative MP even greeted the PM’s return from his coronavirus (Covid-19) absence by likening him to the Lion King.

Good to see @BorisJohnson back at the helm! pic.twitter.com/4aHbShoRCT

But Johnson scuppered any hope he’s the saviour that England – and the wider UK – needs within moments of returning. Because the PM’s response to 20,000+ hospital deaths, thousands more non-hospital deaths, fatalities of 90+ healthcare workers, inadequate personal protective equipment (PPE) for those workers, and numerous other failings was to hail the aforementioned as an “apparent success”.

God help us all.

Worse than the blitz

As The Canary‘s Kerry-Anne Mendoza recently reported, analysis from the Financial Times suggests that:

45,000 people have likely died from Covid-19. To put that in perspective, 43,000 died in the Blitz. Coronavirus has killed more British people than the Blitz.

A number of those deaths have occurred while Johnson was either in hospital, including on an intensive care ward, due to coronavirus or recuperating at the PM’s country retreat of Chequers. But anyone hoping his own experience, and the ghastly death toll he has returned to, would elicit some humility or mindfulness from the PM has been egregiously let down. Instead, upon his return to Number 10, Johnson stood outside and bellowed the following:

If this virus were a physical assailant, an unexpected and invisible mugger, which I can tell you from personal experience it is, then this is the moment when we have begun together to wrestle it to the floor.

It is also the moment of maximum risk because I know there will be many people looking now at our apparent success and beginning to wonder whether now is the time to go easy on those social distancing measures.

UK Prime Minister Boris Johnson tells business leaders "I understand your impatience" to get back to work, but says we "must also recognise the risk of a second spike"https://t.co/5ktCK6To75 pic.twitter.com/Qs5uOWdaMQ

No one can quite believe it:

"Many people will be looking at our apparent success," says Boris Johnson

Does he have any understanding of what a death toll of 40,000 and rising means – how many families have lost someone? Has he no empathy?

This picture has far fewer than 40,000 crosses. Each one was a life pic.twitter.com/gOkNMqmw8P

Boris Johnson just said ‘many people will be looking at our apparent success’ in relation to Britain & Coronavirus.
Our death toll is heading to be the 2nd worst in the world.
This is not a ‘success’, Prime Minister – apparent or otherwise.

I don't know how Boris Johnson can say with a straight face that ‘many people will be looking at our apparent success’. Unless his idea of success is achieving one of the worst death rates in the world. Thousands of lives lost due to inaction. This is not a success story.

In fact, some found the comment so outlandish and perverse that they thought Johnson must have been referring to something else:

When @BorisJohnson speaks of 'our apparent success' he means, as ever, his and his pals' apparent success in managing to fool just enough voters and editors to remain in power.

Or that he was talking to someone in particular:

"people will be looking on at our apparent success" pic.twitter.com/0UIsSEIhCO

But as offensive, as ludicrous, as off the charts tone-deaf as Johnson’s comment is, it is typical of the Conservative government. Tory politicians often make completely bogus statements and repeat them endlessly, apparently expecting people to ultimately believe whatever codswallop is coming out of their mouths. “Get Brexit done” was a prime example. As foreign secretary back in 2018, Johnson also attempted to characterise bombing in Syria as ‘humanitarian’.

As George Orwell observed in his essay Politics and the English Language:

Johnson’s narrative as he returns to lead government risks corrupting people’s minds by making them think its handling of the pandemic is a roaring ‘success’. Nothing could be further from the truth.