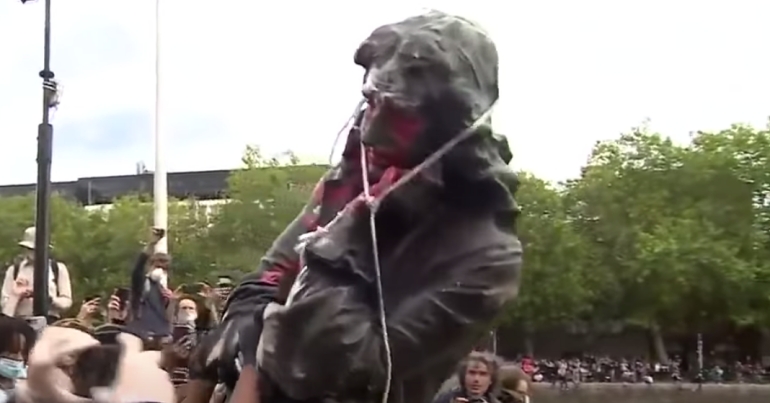 On 7 June, people celebrated as the statue of slave trader Edward Colston was finally pulled down and then thrown in the harbour in Bristol. Predictably, this amazing act was followed by condemnation from all sides of the party political spectrum and Avon and Somerset police launched an investigation.

But it seems that the people of Bristol are less eager to punish those who took part in the action. On 22 June, the police sent a collection of images out to the media of 15 people they wanted to identify in relation to the protest. And while the establishment media were happy to run the story, some local media took a stand and refused to publish the photos.

The Bristol Cable released a statement about its refusal to publish the images. It stated that it had already been careful to “anonymise footage” of the action and said:

As editors and journalists, every day we decide what to include, and what to exclude, based on what is most in the public interest (and our resources).

And it was adamant about why the photos wouldn’t be published:

In this case, it is clear. We will not be using our platform to aid a prosecution of individuals who, in a non-violent act of minor property damage, made a historic contribution to the honest reckoning with our country’s past that is so crucial to justice and building a future for all communities.

We think this is at odds with what the majority of Bristolians believe should happen – as demonstrated by our poll to which more than 10,500 people responded in two days. More than half of them said that those responsible should not be prosecuted.

We think the majority of Bristolians accept that the years of frustration and offence at the statue’s existence mitigate what happened two weeks ago.

But we do not agree that the actions of those young people should be reduced to a simple act of criminal damage which ignores the complex context and history around it.

A climate of fear

While the Bristol Live article also criticises the council and lack of transparency in whether it was the council or the police who wanted to take action, it’s important to remember this is a common tactic used by the police following perceived disorder on protests. And on 8 June, superintendent Andy Bennett said the police had already identified 17 people suspected of causing criminal damage.

Meanwhile, the Met Police have issued photos of 35 people they want to speak to in relation to the Black Lives Matter protests in London.

These actions are deliberate and they’re not just about catching alleged offenders. It’s also about creating a climate of fear designed to deter people from protesting. The police aren’t generally supposed to release personal details of people arrested to the media until they’ve been charged. But it’s okay to splash photos of people who might not have committed any crime for all to see.

The importance of resistance

It’s vital that these sorts of actions by the police are resisted and that people know their rights. But this isn’t something the police like. In 2010, following the student protests, an anti-police surveillance group I co-founded, Fitwatch, was targeted by the Met for allegedly perverting the course of justice. The site had published advice to people who’d been to the protests after the Met published a similar set of mugshots.

Our website was taken down because the Met claimed it was “being used to undertake criminal activities” and:

The website is providing explicit advice to offenders following a major demonstration in central London.

We weren’t. We were providing common-sense guidelines. As the Guardian reported at the time:

The guidance ranged from suggesting that students contact a lawyer or stay away from demonstrations for a while, to advising them to get rid of clothes they were wearing at the protests, as well as spray cans and “dodgy texts/photos on your phone”.

The post added: “The police often use the psychological pressure of knowing they have your picture to persuade you to ‘come forward’. Unless you have a very pressing reason to do otherwise, let them come and find you, if they know who you are.”

The tactic massively backfired. Within hours the guidelines had been published hundreds of times, and within days the site was back and running on a new server hosted overseas. As the first post on the new site stated:

This was a real attempt to squash dissent and criticism of the police, as well as attempting to stifle common sense advice to protesters subject to a witch hunt by the right wing press. The solidarity given by so many people has ensured this hasn’t happened, and has shown we can fight back. Even if we were to be arrested and prosecuted now, we would still be grateful to CO11 [the Met’s public order unit that was responsible for taking down the site] for the amount of publicity they’ve generated for us.

We’re back, and we’re stronger than ever.

Due to what I described at the time as “political intimidation” by the police, this attempt at repression resulted in massive solidarity and thousands more people knowing about our campaign and reading the post. In fact, versions of the post are still circulating to this day.

The decision by Bristol media outlets not to publish the images is powerful and necessary. At times like this, communities need to come together and defend what is right.

And just as the case was in 2010, and other countless times people have had their images published by the police, it’s important that people know their rights. At a fundamental level it’s knowing that just because the police have published your picture, it doesn’t mean they know who you are. In fact, the opposite is often true. If they know who you are, you’re more likely to get a knock at the door rather than a photo in the paper.

It’s also important to remember that just because the police have your photo, it doesn’t mean you’ve necessarily committed any criminal act. But it does mean that if you identify yourself, regardless of whether you’re charged, it’s highly likely you’ll end up on the controversial domestic extremist database and experience the repression and harassment that can come with that label. Domestic extremism is not a legal term and there is no need to have committed an offence, or in fact to be extreme in any way, to end up on the database.

The killing of George Floyd in the US has galvanised people across the world. In the UK, people are rising up against the systemic racism in our own country, and a history of white supremacy that needs to be recognised and taught, not celebrated.

With resistance comes repression. Those who enjoy their privilege and power will do everything they can to repress this wave of rage. We mustn’t let them. We must stand together, show solidarity, and ensure everyone knows their rights.