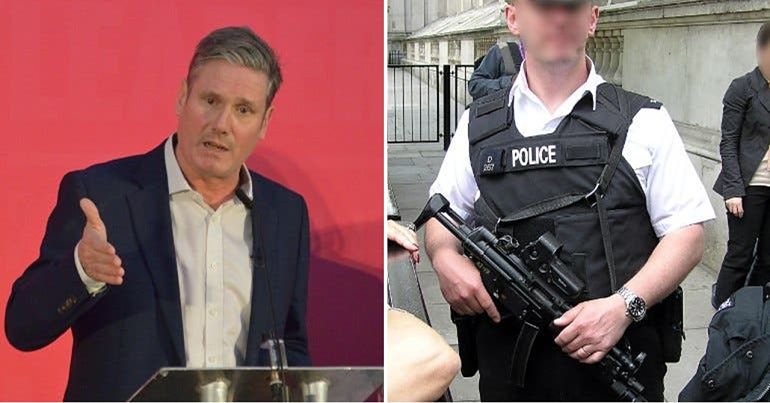 The killing of George Floyd by police in the US has sparked international debate about ‘defunding the police’. Some voices on the left have been arguing that doing so is an important step. And, of course, some on the right have been issuing ominous warnings about the potential negative consequences of such a move. But things aren’t as straightforward as they appear.

Because Keir Starmer’s latest comments have placed him, and by extension his party, to the right of some conservative pundits renowned for their tough-on-crime stances. By trying to give the image that he’s ridding Labour of the so-called ‘far-left’ legacy of the Corbyn era, he’s ended up landing further to the right than the right itself. Evidently, his leadership has already degenerated into some kind of bizarre Twilight Zone. And this raises questions about whether Labour will now revert back to the dark days of Blairism, or perhaps something even worse.

On 29 June, Starmer appeared in an interview on the BBC Breakfast show. In addition to defending his controversial sacking of Rebecca Long-Bailey, he also made some startling remarks about ‘police defunding’. Asked what he thought of such a policy, he responded:

That’s nonsense and nobody should be saying anything about defunding the police. And I would have no truck with that.

He then went on to flaunt his ‘law and order’ credentials. He noted, for instance, that he was “director of public prosecutions for five years” and “worked with police forces across England and Wales, bringing thousands of people to court”. He concluded:

So my support for the police is very, very strong and evidenced in the… joint actions I’ve done with the police.

What is ‘police defunding’?

He seems to not even understand what ‘defunding the police’ actually means. Because it most certainly doesn’t mean doing away with any kind of mechanisms for addressing the problems of crime and violence within society. Rather, supporters of police defunding propose:

There is no set-in-stone model for what this would look like, but it could resemble a community-based public safety approach that works to prevent crime by, for example, settling disputes peacefully within neighbourhoods. This already forms an (albeit small) part of the UK’s law enforcement apparatus in the form of ‘community liason officers’. Writing in The Nation, sociologist Alex S Vitale summarised police defunding as “redirect[ing] resources into community-based initiatives that can produce real safety and security without the violence and racism inherent in the criminal justice system”.

Further right than the right

Clearly, Starmer is trying to exude the image of adhering to a ‘sensible’ centrism that, according to this narrative, will make him more electable than his predecessor. But he seems to have overshot the centre by several miles and ended up on the far right. For one thing, saying that “nobody should be saying anything about defunding the police” seems like he’s advocating coercive suppression of open debate, which borders on the fascistic.

But leaving that aside, the reality is that by making these hardline comments he has positioned himself further to the right than even some of the most right-wing ‘law and order’ voices in all of the UK. In a bizarre irony, whereas Starmer tacitly rejects even a modicum of the reforms that police defunding supporters advocate with his glib dismissal, some pundits from the political right have actually been making the case for some degree of these reforms for years.

‘An occupying army’ rather than Robert Peel’s vision

Anthony Daniels (better known by his pen name Theodore Dalrymple) and Peter Hitchens are both known for their strong criticism of the British criminal justice system. In fact, they both believe firmly that it is currently far too lenient on criminals. Yet in spite of this, their positions on the police are much closer to those of supporters of police defunding than those of Starmer.

Writing in City Journal in 2006, for example, Daniels opined:

In Britain, we once prided ourselves—rightly—on our unarmed police force. The police were the servants of the law-abiding citizenry, nothing more and nothing less.

Recently, though, the police have become more militarised in manner and appearance. Increasingly, they look like an occupying army, festooned with the paraphernalia of repression. This is not to say that they are effective in suppressing crime, however. On the contrary: the more aggressive they look, and the more bullying they become, the less effective they grow.

Writing on his blog at the Mail Online in 2015, meanwhile, Peter Hitchens stated:

the job of the police is not primarily to ‘catch criminals’. Robert Peel persuaded a reluctant Parliament to agree to set up a police force because it would *prevent* crime.

Each crime and each arrest represents a *failure* of the prime duty of the police, which is to prevent crime and the disorder which encourages it. The system of regular preventive patrolling was developed to create an atmosphere of safety on the streets, to deter crime and disorder.

Whether consciously or not, these arguments are essentially the intellectual pillars on which advocates of police defunding build their argument. Surely, something is seriously amiss if Daniels and Hitchens are to the left of the leader of the Labour Party on policing matters. But as the old saying goes, politics can make for strange bedfellows.

After all, it was the Labour-right Blair government that launched ‘anti-social behaviour orders’ and tried to introduce identity cards. Jeremy Corbyn and other Labour-left figures joined forces with opposition parties in parliament to oppose them. And it was eventually left to the Conservative government of David Cameron to repeal both of these disastrous policies. Indeed, as many on both the left and the right have argued, Tony Blair led one of the most reactionary governments in British history in many respects. In addition to a dreadful record on civil liberties, his foreign policy included supporting George W Bush’s disastrous wars in Iraq and Afghanistan along with upholding most of the Thatcher era anti-trade union legislation.

Evidently, Starmer is a Blairite through and through. And this latest righter-than-the-right positioning on police defunding makes that fact clear as crystal.