Thousands of people are heading to Cornwall. Please turn around and stay away. - Canary 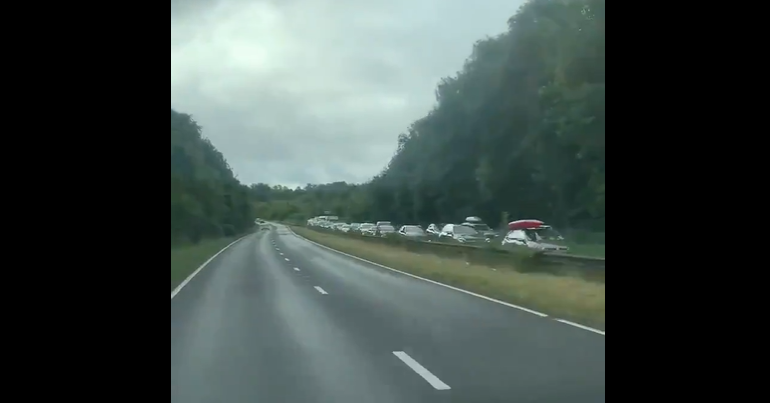 I’m watching scenes of traffic building up on the M5 and A30 on the way to Cornwall and I’m shaking with rage. Boris Johnson has lifted lockdown restrictions far too early – and people are heading to Cornwall. Estimates are that 80,000 people could arrive this weekend. This incandescent rage I’m experiencing is so strong that I’ve felt the need to write this instead of enjoying the week’s leave I’m currently supposed to be taking.

But make no mistake. My rage isn’t against those travelling. And it’s not against local businesses which have no choice but to open up. It’s against this government that’s prioritised money over people’s lives.

Okay, I am a bit angry at people travelling too…

Only that’s not quite true. My utter rage is against the government. But I’m also angry with people. I’m angry at the rich people who can afford a second home or the extortionate rates charged by holiday lets, and at their arrogance that their need to get away trumps everything else. I’m not angry at inner-city families getting away from small flats. And I’m not angry at those visiting family they haven’t seen for months. But the reality is it’s not a cheap option to visit Cornwall for a week.

Yes, I’m angry because of the impact this has on my family and loved ones. I’ve spent months protecting vulnerable households, mine included. I’m upset because I can’t take advantage of the easing of any lockdown restrictions. While the rest of the country celebrates the fact that they can get a fucking haircut or a pint, those of us in rural communities who are facing an onslaught of visitors are having to think about locking down more.

Still, I’m lucky. I’m so incredibly lucky. I work from home. I have the option to stay indoors. I realise this. But I was looking forward to things easing slightly. I want desperately to hug my parents and spend an evening with them. I yearn to do tiny things that would make such a difference, things that were in sight until the rules changed. Now I don’t even want to go to my local shop for essentials during the day – I’ll go early and come straight home.

No end in sight

And now there’s no end in sight. I can only see things getting worse. So I am sorry if you’re here for a holiday and people like me aren’t welcoming you with open arms. I’m sorry that I don’t care that you’re one of the responsible ones who’s going to respect the rules. Because for each of you that says, ‘well, I’ve got PPE’, or ‘I’m going to do x, y, and z’, there’s a hundred twats who don’t give a shit.

If you’re thinking of coming to Cornwall, or any other beauty spot for that matter, there are serious questions you need to ask yourselves. Is your holiday worth overrunning that one hospital? How many deaths is your holiday worth? Albeit this is a question that many people don’t give a fuck about when they book their two weeks in a Turkish resort, maybe it’s time to start thinking about it.

Because you might want a holiday, but I want my mum, my dad, my sister, my partner, my aunt, my uncle, my best friend, and countless others who I know, and don’t know, to live. To survive this pandemic. My parents haven’t left their house in three months. They were just starting to think that they might be able to go to the beach again. Now they can’t. My vulnerable aunt and uncle live in a holiday hot spot. How long before the virus spreads through their community?

Yes, this is emotive. Yes, it’s a guilt trip. But honestly, I don’t care. You know what, I’d love a holiday too. But I wouldn’t take one because it’s not responsible.

And ultimately, because we’ve got a government that isn’t ever going to prioritise our safety over the economy, emotive guilt trips like these become necessary. Especially when we’ve got a population that’s excited about getting a fucking pint while the UK still has one of the highest coronavirus death rates in the world.

So if you’re coming to Cornwall, don’t expect the locals to be waiting for you with open arms or even socially distanced arms. It’s not because we’re snobs. It’s not because we’re selfish. It’s because we know the reality of the healthcare situation here. We know we have a vulnerable elderly population. We are just overwhelmed and upset by what your holiday is going to do to our communities. Please think again. Please stay away.