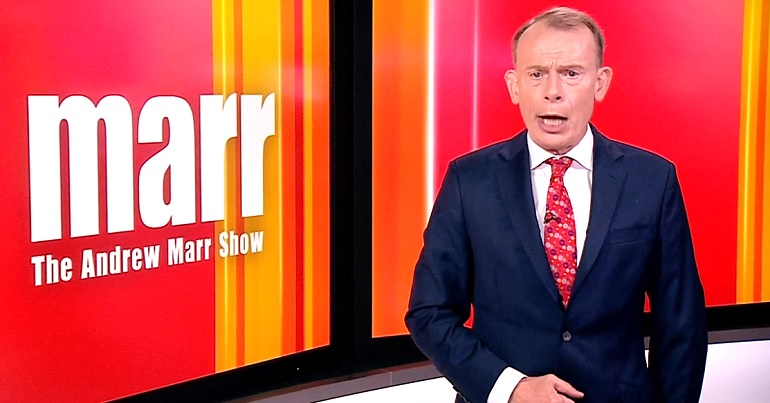 40 seconds of The Andrew Marr Show on Sunday 20 September was probably enough for some people. But it was all the time it took for the host to make his position on the never-ending coronavirus (Covid-19) chaos clear. Because he didn’t bother holding the selfish and reckless Tory government to account. Instead, he said we should all be ‘less angry’ and ‘more generous’ in politics.

In his opening segment, Marr talked about coronavirus. He mentioned the new rules and touched on the effect they’re having on some of us. But he also made his political views clear. Marr said:

Maybe this is just a time we somehow have to get through. And it may seem a strange thought for an interview show, but perhaps, to do that, we need a bit less anger in our politics – and a little bit more generosity.

Strange indeed. Given that the BBC‘s remit should be impartial, public service broadcasting, it shouldn’t be ‘generous’ to political parties. Not that Marr has the best record when it comes to being bias-free. As I wrote on Sunday 13 September, he spent a portion of that week’s show defending the government breaking the law. All in the name of alleged ‘impartiality’, of course.

But being less angry, and more generous, in politics is easy for Marr to suggest. I’m sure his £360,000 salary helps him to ‘keep calm and carry on’. For the rest of us, though, being generous is a bit more tricky. Not least when politicians have let coronavirus ravage the country and its citizens.

Maybe Marr would like to tell the families of the coronavirus dead to be a bit more generous. Specifically, he might want to speak to the relatives of the 59% of deaths who were disabled people between 2 March and 14 July. Maybe he could explain why one organisation said disabled people had been “abandoned, forgotten and ignored” by policymakers. But I doubt he would, as we all now need to be ‘generous’, after all.

He probably is. Because the health secretary Matt Hancock was on his show on 20 September – and my! Wasn’t he generous to him. Hardly a grilling, despite the chaos around Hancock. Marr being true to form, as always.

‘Be generous’: the phrase that sums up the corporate media

But ultimately, Marr ‘being generous’ sums up him and the corporate media. As I previously wrote for The Canary:

corporate journalists are essentially wedded to the establishment. They cannot bite the hand that feeds them. So instead they have to placate rather than agitate… In the interests of ‘balance’, the truth is no longer relevant. Even if that ‘balance’ presents lies as fact or opinion.

That same ‘balance’ is responsible for Marr asking us all to be ‘generous’. But when people have died unnecessarily, surely anger is the only correct emotion? Otherwise, the government that has put wealth before health will just continue to get away with it.