Marr just had another Noam Chomsky moment, live on TV - The Canary 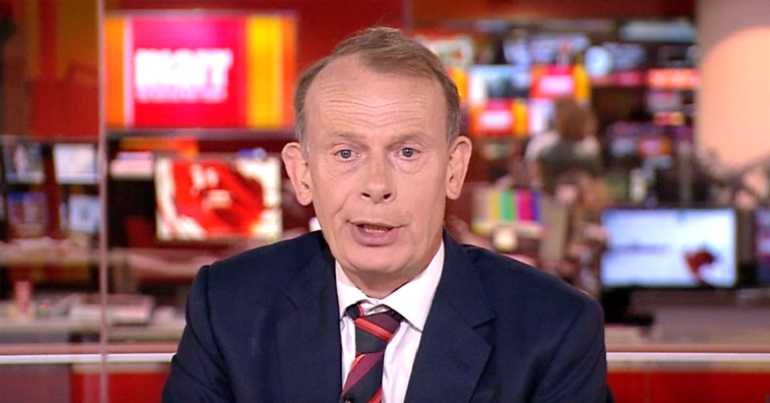 On the Sunday 13 September of the Andrew Marr Show the corporate media got a knock-out blow. Because an Irish politician inadvertently put the host in a similar position to one Noam Chomsky did several years ago. And it exposed a huge problem that persists with the corporate media.

The infamous clip where Chomksy drops a truth bomb on Marr is well-known. He broke down the fact that corporate journalists are often inadvertently responsible for peddling establishment propaganda. As Chomsky noted, he didn’t think journalists like Marr “self-censor”. But that:

if you believed something different, you wouldn’t be sitting where you’re sitting.

Now, Marr was subject to a similar ‘light bulb moment’ thanks to an Irish politician.

Ireland’s foreign affairs minister Simon Coveney was on Marr. He was discussing the chaos over Brexit and the internal market bill. As The Canary previously reported, the government is planning on breaking the law over it. It’s to do with the fact that it wants to renege on some of the original deal it signed with the EU. On Sunday 13 September, Labour said it would “not vote” for the bill if it broke the law.

Coveney was not happy with the UK government’s proposed actions. But he also made an interesting point about the media coverage of the issue. He said to Marr that:

Andrew, you’ve been following these negotiations for more than three years now, and you’re a pretty good detail person. And you know that that is a completely bogus argument.

He then laid out why the Tories’ argument is bogus. Marr repeatedly interrupted, putting the Tories’ side of the story across. But Coveney wasn’t happy with this. He said to Marr that:

You seem to be suggesting that there are two sides that are equal in this disagreement. There aren’t. There is one side that is breaking an agreement that was signed by both.

Marr ‘OK’d’ and ‘but’d’ his way through Coveney’s take down, going back to put the Tories’ side across again. And Guardian political commentator Peter Walker latched onto this.

it’s a conundrum for UK journalists, as faced in US with Trump: how do you discuss what your leaders say when it it obviously, demonstrably not true?

And this is [the] case whatever side of the Brexit argument one is on: No 10’s argument that it’s EU suddenly threatening NI peace/moving the goalposts is not only untrue, but obviously so. Makes it tricky to present it with BBC-style “balance”/they said-you said. It’s a new world.

But Walker’s point that it’s a “conundrum” for journalists to say that political leaders are lying sums up the problem with the corporate press.

Wedded to the establishment

It’s what Chomsky previously called Marr out on. And it’s also what Media Lens highlighted in the ‘five stages of mainstream journalism’:

It’s that corporate journalists are essentially wedded to the establishment. They cannot bite the hand that feeds them. So instead they have to placate rather than agitate. Marr presenting the Brexit situation as a story with ‘two sides’ is a prime example of this. In the interests of ‘balance’, the truth is no longer relevant. Even if that ‘balance’ presents lies as fact or opinion.

Walker said that this is a “new world”. But it’s not. It’s the same one that has been operating for decades. It’s refreshing for a politician to effectively call it out, live on TV. But regardless of whether Marr ‘got it’ or not – him and the rest of the corporate press pack will continue with their subservient behaviour anyway.