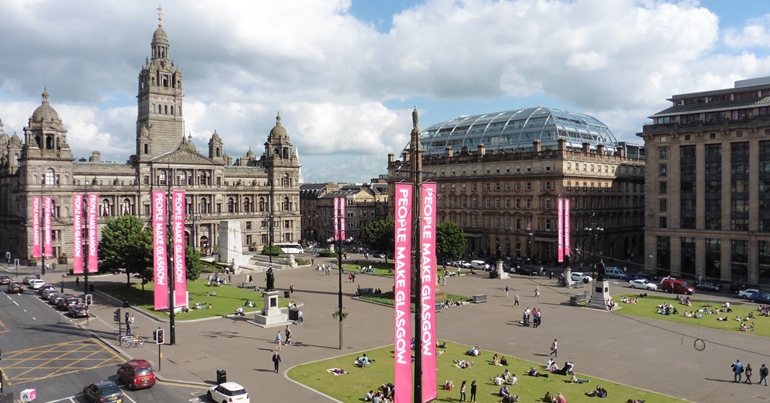 In order to maintain safe working practices during coronavirus (Covid-19), cleaning staff at Glasgow City Council worked reduced hours. Then, when the council decided they should return to normal working hours, staff called for a meeting with management. However, staff representatives claim management refused this request, so staff “walked out in sheer frustration”.

That’s why cleaning staff staged a protest in George Square on 7 September. Their union, GMB Scotland, said it was the wrong time to return to full-time work as safety measures must get priority.

A “smear” on workplace relations

This industrial action doesn’t come completely out of the blue. Because GMB Scotland claims there are outstanding pre-coronavirus workplace problems. It says that, as a result of cuts to the council’s budget and services, staff lack necessary resources.

the issues facing the service pre-covid remain unchallenged by the council.

Glasgow has a waste crisis after a decade of cuts to the city’s budget and its services and we cannot expect to tackle this without meaningful investment. We need more resources.

Relations between cleaning staff and the council then soured when Glasgow City Council posted an online notice declaring their actions as “illegal”.

So the SNP led Glasgow City Council have pulled this social media post about key workers, the folk who empty our bins going on an ‘illegal strike’. pic.twitter.com/WZ75dozu0F

Earlier this week we called for co-operation, safety and investment in the service, so it’s disappointing to see the council smear low-paid key workers on social media just 48 hours later.

It was reported that the tweet was deleted, yet on 13 September the claim was still on the council’s website.

The message was being widely misrepresented as the view of various councillors, so we chose to delete it. This is an operational matter, dealt with by officials.

The Scottish government had plans to ease lockdown restrictions this month. Some of these measures have now been paused until at least 5 October while others have been tightened. But Glasgow City Council still wanted its cleaning staff to return to full-time work hours.

The safety and well-being of our key workers and their families must be the priority here.

It’s not safe for the council to phase-out coronavirus lockdown working arrangements at time when there is a resurgence of the virus in the city.

It would be more far [sic] sensible to maintain the lockdown working arrangements for the time being and to have a proper consultation with service management about what the future will look like and how we can best deliver services in a safe and efficient manner.

As reported by The Canary on 12 September, NHS staff went on strike for better pay. They demanded:

And as cleaning staff are also frontline staff, they would also need support to carry out their jobs.

A spokesperson for the council said:

Agreement was reached with senior GMB officials on Tuesday for staff to return to work on Wednesday [9 September].

There was also agreement with the GMB over a phased return to normal contracted hours over the next six weeks.

The Canary contacted Glasgow City Council and GMB Scotland for further comment but neither responded by the time of publication.