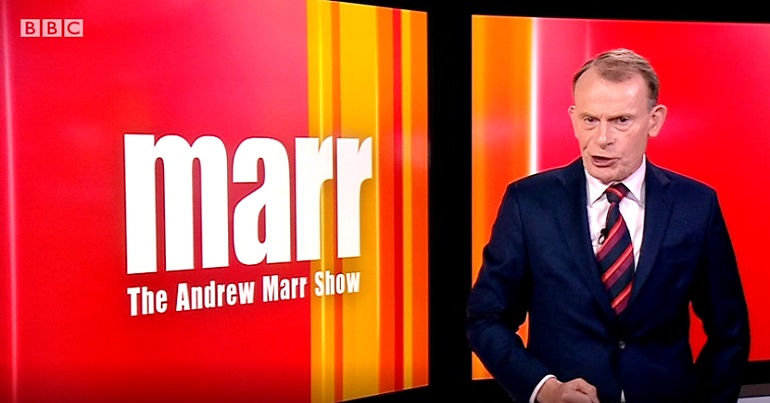 The Andrew Marr Show went a bit Covid-conspiratorial on Sunday 27 September. Because the host managed to dismiss the serious nature of coronavirus (Covid-19) in one fell swoop. And he whitewashed everyone who has been sick or died from the virus, too.

Much like 20 September’s show, Marr didn’t take long to cause controversy. His opening speech would have been quite at home at the anti-masker rally in London on 26 September. He talked about the “extraordinary sacrifices” people are making. But then Marr went a bit Covid-conspiratorial to say the least. He posed the question:

Is there another way forward? Is it possible to protect the economy, reopen the stadiums, the offices, the theatres and the shops while at the same time keeping deaths down?

Reopening things (like restaurants) is likely a part of what caused the second wave of coronavirus in the first place. A flagship BBC political programme should be questioning the chaos of the government’s approach – not asking whether or not it is too strong. But then, Marr managed to dismiss the number of coronavirus cases the UK has had.

Marr and BBC economics editor Faisal Islam were talking about a story in the Sunday Times. It was a dot-graphic showing the UK stats on coronavirus versus the entire population:

So, not to be outdone by the anti-maskers, Marr blustered that on the graph:

Islam seemed to see straight away the error in what Marr said. He stuttered slightly, backtracking on the host’s behalf:

Others would [argue]… so there’s diff… that same figure… is… tens of thousands of deaths that on an international scale has been higher in the UK compared to many similar advanced nations.

But Marr calling the number of confirmed cases “absolutely miniscule” is typical of the BBC host.

Last week, he said we all need to be more “generous” in politics. But as I wrote:

Maybe Marr would like to tell the families of the coronavirus dead to be a bit more generous. Specifically, he might want to speak to the relatives of the 59% of deaths who were disabled people between 2 March and 14 July. …

This low-level government propaganda is what the BBC does best. And by dismissing the hundreds of thousands of sick people, and tens of thousands of deaths, Marr has once again shown his true colours. And how ugly they are.